5 Sculptures by Auguste Rodin You Should Know 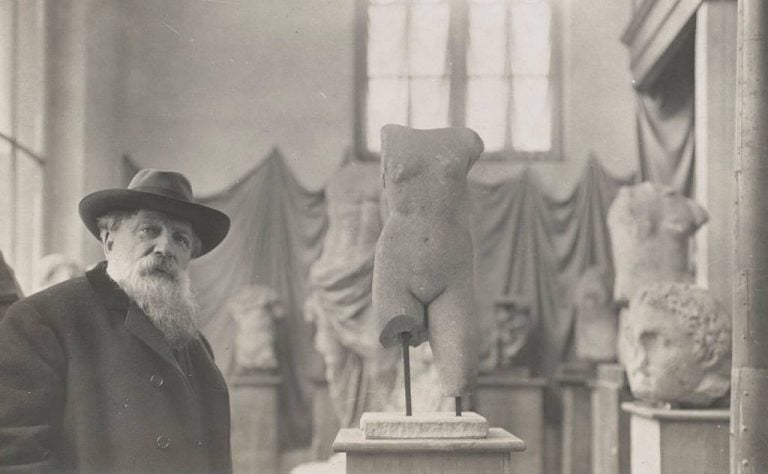 Francois Auguste Rene Rodin was born in Paris on November 12th, 1840. The French sculptor is known as the progenitor of modern sculpture. Even though much of his work was criticized during his lifetime, today he is considered one of the greatest artists in Western art history. Here are five groundbreaking works by him that you need to know!

While Rodin was tremendously talented, he did not enjoy much luck in love. He married his long-time partner, Rose Beuret, in January 1917 but she died only three weeks after their wedding. He was also involved in a passionate affair with Camille Claudel, who was a talented sculptress herself and was a great inspiration on the artist. In the course of their tumultuous relationship, Claudel was diagnosed with a mental illness and spent several years in an asylum.

This sensual sculpture is one of the most famous depictions of this expression of love. See here DailyArt Magazine‘s ode to kissing in art history.

What is he thinking about? The bronze statue is often interpreted as an image of philosophy. This sculpture was originally made to be a part of the monumental Gates of Hell (shown below).

3. The Gates of Hell

Rodin created this model for a monumental entrance to a museum of the decorative arts in Paris but the plans for it were eventually abandoned. Today the plaster cast stands in the original location where it was commissioned (the Musée d’Orsay).

4. The Age of Bronze

This bronze statue depicts a life-size male nude and was first exhibited in the 1877 Salon. It caused lots of controversy as Rodin was accused of casting a living model instead of sculpting it himself.

5. The Burghers of Calais

This group of bronze sculptures commemorates the surrender of burghers of Calais, a French port city, during the Hundred Years’ War (1337–1453). This work caused even more controversy than The Age of Bronze, as Rodin chose to depict a historical scene at ground level, without allegorical figures. Furthermore, it has a naturalistic quality to convey the anguish of the starved people of Calais.

Did you enjoy our selection of Rodin masterpieces? Which one is your favorite? Let us know in the comments.