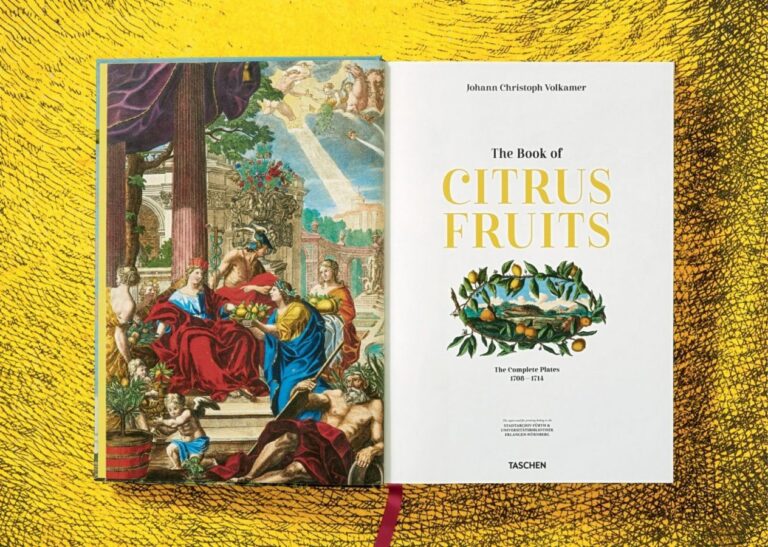 Inside J. C. Volkamer. The Book of Citrus Fruits by Iris Lauterbach, Taschen, 2021.

5 Books About Van Gogh You Have to Read

15 Books About Art to Read During Quarantine

Summer is finally here, and if you are looking for some summer reading to accompany you while you laze by the pool of your villa or soak up the sun on the beach this summer, then look no further. From art to photography, design to cultural theory, old to new – we’ve got you covered! Today, we’re going to recommend ten of the most inspiring and innovative art books to accompany your summer holiday.

Afro-Atlantic Histories (2021) brings together a selection of around 400 works and documents by more than 200 artists from the 16th to the 21st centuries. Above all, the works express and analyze movements between Africa, the Americas, and Europe across this time period.

This book is motivated by a mission to better explore and understand the visual cultures of Afro-Atlantic territories. For instance, it explores the experiences, creations, religious beliefs and philosophies of the inhabitants.

The works presented have been carefully selected by its editors, Adriano Pedrosa and Tomás Toledo, with many other contributors. It is organized into eight thematic groupings: Maps and Margins; Emancipations; Everyday Lives; Rites and Rhythms; Routes and Trances; Portraits; Afro Atlantic Modernisms; Resistances and Activism.

If you want to educate yourself on this vast history, spanning centuries and involving millions of people, then this art book is for you.

Sophie Calle’s L’Hotel (1984), is a little treasure. The French writer, artist, and photographer began working as a chambermaid at a Venice hotel in 1981. Here, she secretly photographed the rooms when guests were out.

Primarily, she captured images of unmade beds, belongings, clothes piled up on the floor, unfinished food, and half drunk bottles of wine. Yet, she also photographed the contents of closets and suitcases, examining the contents of the rubbish bin and the toiletries arranged on the washbasin. She even discovered their birth dates and blood types, diary entries, letters, and photographs.

To accompany the images, Calle wrote short, diary-like texts in which she imagined the lives of the people whose personal space she was exploring. Her observations capture the reader, pulling them into this voyeurism with her.

Simple, honest, and timeless, this book leaves you feeling like you yourself are moving through the private lives of the guests.

Old Glory (2016) reveals 50 unseen photos of alternative United States flag designs. Designers submitted these to President Eisenhower for consideration following the addition of Hawaii and Alaska, in 1958 and 1959, to the Union.

Capturing the visual history of America – through the lens of  America’s vexillographic history (the art of flag designing) – this book provides a fresh look at American culture during the 1950s. It comprises 124 pages, entirely in red, white and blue, and includes 50 flag designs.

This fascinating book also features accompanying photography and text which capture the spirit of Americana during this period. Not only does it give us an idea of what might have been, it also pays tribute to patriots and amateur vexillographers alike.

Johann Christoph Volkamer (1644-1720) was a Nuremberg silk merchant with a passion for gardening. At a time when citrus fruit was largely unknown in northern Europe, he was fascinated by it. In 1708, he commissioned a team of copperplate engravers to create an extravagant series of 256 plates of 170 varieties of citrus fruits.

The images include citrons, lemons, pineapples, and bitter oranges. Yet, the most decadent aspect is that they are represented in majestic, surreal scenes. These include Genovese sea views, the Schönbrunn Palace, a sun-bathed yard in Bologna, and small South American towns. The images beautifully depict both foreign lands and their fruits. Full of color, they take us back to a time when citrus fruits really were exotic.

Volkamer published these plates in a two-volume work in 1708 with the lengthy title, The Nuremberg Hesperides, or: A detailed description of the noble fruits of the citron, lemon and bitter orange; how these may be correctly planted, cared for and propagated in that and neighboring regions. Now, these images have been collected and organised into J. C. Volkamer. The Book of Citrus Fruits (2021) by Professor and art historian, Iris Lauterbach.

You don’t need to travel anywhere outside this book – the pages will take you to the most exotic destinations you could imagine.

Scottish art director, game designer, and photographer Liam Wong went to Tokyo in 2015, where he decided to take a break from his video game work and try his hand at photography. It was there that he discovered he had a passion for nocturnal scenes, ‘I got lost in the beauty of Tokyo at night,’ he explains. Consequently, he began shooting Tokyo’s nightlife in a surreal and fascinating way of his own.

In his debut monograph, TO:KY:OO (2019), Wong presents the images in a cyberpunk-inspired exploration of nocturnal Tokyo. The photographs are evocative and transport us not only to the city, but seemingly another world. Unlike other art books, it also features a section that reveals the creative and technical process of Wong’s method. From identifying the right scene to composition, from capturing the essence of a moment to enhancing color values, these insights are invaluable.

His visions have earned him global attention from international news outlets, fans across social media, the video game world, photographers, and designers.

In Art as Therapy (2016), renowned philosophers and authors Alain de Botton and John Armstrong explore the therapeutic potential of art. Principally, their aim is to show us how art can help and guide us with some of life’s everyday problems. These include work, love, status, self-worth, and questions of morality.

Engaging and lively, this book is full of examples of outstanding art, architecture, and design. Its chapters on Love, Nature, Money, and Politics show how art can help with many common difficulties, from forging good relationships to coming to terms with mortality.

The authors mainly seek to help us develop a deeper understanding of art and of ourselves, in equal measure. This book provides fascinating reading for those who are familiar with art as well as those who are new to the subject.

If you’re looking for a guide to help enhance your mood and enrich your life, look no further!

7. The Art of the Occult: A Visual Sourcebook for the Modern Mystic, 2020

The Art of the Occult (2020) by S. Elizabeth presents a diverse range of an artwork that is inspired by spiritual beliefs, magical techniques, mythology, and otherworldly experiences.

Mystical beliefs and practices have existed for millennia. From the beginning of human creativity itself, we have been drawn to these ideas and have created artworks that transcend time and place.

This book introduces major occult themes and showcases the artists who have been influenced and led by them. For instance, it looks at theosophy and kabbalah, the zodiac and alchemy, spiritualism and ceremonial magic, the elements and sacred geometry. Above all, readers will discover the symbolic and mythical images of the Pre-Raphaelites, the drawing of Swedish artist Hilma af Klint, English artist Madge Gill, Leonora Carrington’s surrealist interpretations, and much more.

Accompanying the art, S. Elizabeth has written an informative Introduction and 12 thematic chapters grouped under three categories: The Cosmos, Higher Beings, and Practitioners.

This art book will spark curiosity in all fans of magic, mysticism, and the mysterious!

Between 1997 and 2002, American photographer Justine Kurland set out to photograph teenage girls across America. While the American frontier is a symbol of romance, space and freedom, it’s also deeply masculine. Primarily, we typically associate this area with cowboys, outlaws and beat poets, forgetting the experience of women.

Yet, in this iconic series entitled Girl Pictures (2020), Kurland decided to shine a light on the adolescent experience of girls in the American wilderness. “I staged the girls as a standing army of teenage runaways in resistance to patriarchal ideals,” says Kurland. Ultimately, she portrays the girls as both fearless and free, tender and fierce.

They hunt and explore, braid each other’s hair, and swim in watering holes. Their world is at once lawless and Utopian, a frontier in the wild spaces just outside of the bustling cities. Published twenty years on, the series still resonates.

This book shows Kurland’s collection of images in its entirety and includes newly discovered, unpublished photographs.

Originally published in 1993, we welcome a new edition of The Other Side (2019). Principally, it offers an expanded and updated version of Nan Goldin’s superb work on the topic of gender and sexual orientation.

Firstly, the book begins with the images Goldin captured when she was living in Boston in the 1970s. She focused on a group of drag queens, documenting both their glamour and vulnerability. Then, in the early 1980s, she chronicled the lives of transgender friends in New York when AIDS began to emerge within her community. In the 1990s, she recorded the explosion of drag as a social phenomenon in New York, Berlin, and Bangkok, photographing public personas while showing real lives backstage. Finally, Goldin’s newest photographs are intimate portraits of some of her most beloved friends.

The Other Side is her homage to the queens she’s loved over the last four decades.

One of our favorite art books, it is well worth a read, particularly at a time when gender and transgender discourse is so pertinent.

The writer, fashion critic, and art curator Charlie Porter delivers an amazing account of artists and their attire in What Artists Wear (2021).

We live our lives in clothes without realizing their power. This is especially true for some of the world’s most daring and revolutionary artists. Porter argues that when they wear clothes, artists are revealing the power behind fashion. Above all, the garments become tools of expression, storytelling, resistance, and creativity; they become canvases on which to show who they really are.

In this innovative book, Porter takes us on an eye-opening journey through the iconic outfits worn by artists in the studio, on stage, at work, at home, and in public. From Yves Klein‘s spotless tailoring to the kaleidoscopic costumes of Yayoi Kusama and Cindy Sherman; from Andy Warhol’s signature denim to Charlotte Prodger’s casual look, Porter selects all that is fascinating. Ultimately, he weaves together a new way of understanding artists, and of dressing ourselves.

If you’re interested in art, design, and fashion, then this is the perfect summer read for you!