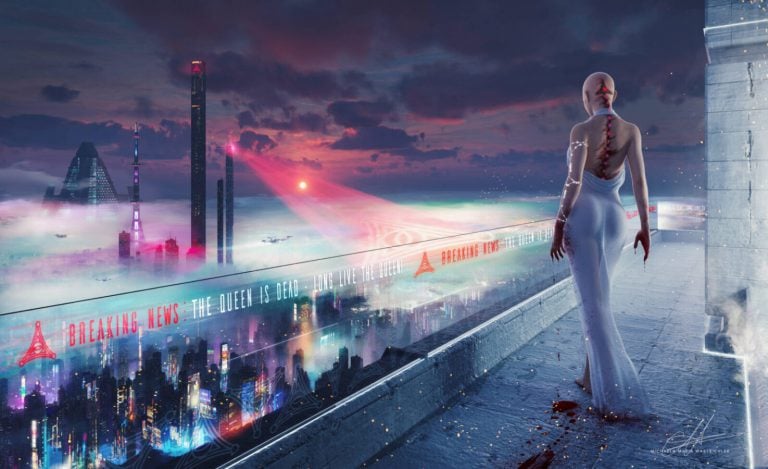 There are many artistic styles and genres not recognized by the official art world. In some cases, the artists of a certain genre struggle for acknowledgement. Their works might be technically excellent but for one reason or another they don't get the attention they deserve. Meanwhile others do not wish to be acknowledged. They have a more specific target audience and they communicate only with it. Steampunk, Dieselpunk, and Cyberpunk are three examples of this. The -punk suffix has to do with their aim to highlight the countercultural nature and the opposition to "high brow" art. However this is their only connection to the broader punk subculture. Although, as we will see further on, there are some truly punk elements within them. So, without furtrher ado, let's look at some punk in art!

Steampunk is the mixture of science fiction, technology, and aesthetic design of the 19th-century industrial revolution and generally the steam-powered machinery of the industrial era. The term first appeared in 1987, when K.W. Jeter used it to refer to all fiction literature of the 1950s and 1960s.

The steampunk ambiance is set usually in the 19th-century, either in the American Wild West or in the British Victorian Era. Nowadays it can be in different countries as long as the main source of energy comes from steam. Steampunk includes technologies and inventions in a way that 19th-century people could have imagined them. Therefore this adds the element of futurism in a sense of what history might have been. Some other elements that enrich the Steampunk subculture are horror, fantasy, and historical fiction. Also, another important characteristic is the importance of old-fashioned values, such as politeness, elegance, and charm.

There are many books that have influenced the steampunk genre. The most famous are Nautilus and Twenty Thousand Leagues Under the Sea by Jules Verne, The Time Machine by H.G. Wells, even Bram Stoker's Dracula and Mary Shelley's Frankenstein. In 1999 Alan Moore created the graphic novel series The League of Extraordinary Gentlemen, which is the epitome of Steampunk style in comics. One common thing about all the aforementioned is the use of machines, such as time machines, zeppelins, robots, and even flying ships.

Steampunk has also made its way to the cinema. Two of the most distinguished movies are The Golden Compass and Disney's The Treasure Planet. Other films include Wild Wild West, the film adaptation of The League of Extraordinary Gentlemen, and A Gentleman's Duel. As we can see, Steampunk has also influenced animation too.

Steampunk art exists in many forms: paintings, illustrations, sculptures, architecture, even everyday objects, such as lamps or trunks. The artists use wood, glass, leather, copper, and brass, that is materials used to make a Victorian piece. In an attempt to reinvent the period, they might use other materials as well. In general, Steampunk is all about art and fashion as these are the best means to express its aesthetics. People can even have a Steampunk style today, often making their own clothes. Men might wear monocles, goggles, toppers, or vintage trench coats. Meanwhile women wear corsets with skirts and Victorian style boots and accessorize with vintage jewelry detailed with mechanical parts such as gears. In any case Victorian influences are very strong.

Regarding the artists, there are many worth mentioning. Erin Colleen Williams creates jewelry, paintings, and sculptures.

Aurélien Police creates covers for books and CDs, as well as illustrations.

Art Donovan makes home devices, such as table lamps, and illuminating sculptures. He is considered an authority on Steampunk art and design. Art has also written some books. The most important is The Art of Steampunk, volumes 1 and 2, and it is the first complete book on the genre's art.

James Ng (pronounced Ing) is a Hong-Kong based artist. He is mostly known for his Imperial Steam & Light series, a universe of Chinese Steampunk. However his style also embraces science fiction and fantasy in general.

In either 2001 or 2002 game designer Lewis Pollak used the term Dieselpunk to describe his role-playing game (RPG) Children of the Sun. Later on Anders Blixt also used it for the same reason, for his RPG Lemuria. But what is Dieselpunk?

Dieselpunk is the combination of the aesthetics of the diesel-based technology of the interbellum era and up to the 1950s with retro-futuristic technology and postmodern sensibilities. Contrary to Steampunk, Dieselpunk is always pessimistic. Furthermore, it is divided into two primary themes or styles: Ottensian and Piecraftian.

The Piecraftian style is named after its advocate author, "Piecraft". It focuses on the aesthetics of World War I and II. Also it proposes scenarios on what human culture would look like if it stopped evolving due to constant widespread warfare. This style takes the aesthetics of the diesel era to later periods of history. In other words, it describes a world where survival, which is based mostly on diesel power, is above aesthetic evolution. This concept exists in movies such as Mad Max.

The Ottensian style is named after the author Nick Ottens. It is set in a universe where the decadent aesthetics and the Utopian philosophies of the American Roaring Twenties continued to evolve without being cut short by the economic collapse and war. Also it has a positive vision of technology, where the Utopian ideals predicted by the World's Fairs came to light. Moreover, Ottensian often embraces an enthusiasm for the future and has elements of retro-futurism.

There were many artworks before the appearance of the term. In art, Dieselpunk embraces visual arts, architecture, film, music, and literature. It has elements of pulp adventure, film noir, horror, futurism, and Art Deco. Also it is interested in weird machines, full of internal levers, cracked-glass meters, that all look intense and suspicious. A major inspiration for Dieselpunk art is the film Metropolis.

Just like in Steampunk, there are many notable Dieselpunk artists. Alejandro Burdisio is one of them. He is an illustrator/concept artist and creates worlds in which vehicles of the 1960s, such as trains, cars, even buildings, can take off into the air using hover technology.

Another artist is Sam van Olffen. He has created a dystopian universe in which humanity revolves around the machine and war industry.

Stefan Prohaczka is a Russian artist. He created a Dieselpunk state and his works depict scenes from there or portraits of its citizens.

The aforementioned Keith Thompson doesn't make only Steampunk artworks, but Dieselpunk too! Other artists include Alexey Lipatov, ixlrlxi, and Waldemar Kazak.

Cyberpunk is a sub-category of science fiction. It is set in a dystopian futuristic environment that combines lowlife with high tech. Artificial intelligence and cybernetics are mixed with a radical change in the social order. Laurence Person defines it:

"Classic cyberpunk characters were marginalized, alienated loners who lived on the edge of society in generally dystopic futures, where daily life was impacted by rapid technological change, a ubiquitous datasphere of computerized information, and invasive modification of the human body."

The roots of Cyberpunk are in the New Wave science fiction movement of the 1960s and 1970s. It was then that a group of writers, such as Philip K. Dick, Roger Zelazny, and others, examined the impact of drug culture, technology, and the sexual revolution. At the same time, they stayed away from the Utopian trends of earlier science fiction.

A typical Cyberpunk plot usually consists of a conflict between artificial intelligence, hackers, and mega-corporations. It takes place in a post-industrial dystopia, in which technology is used in ways never imagined before. Also the line between actual and virtual reality is blurred since much of the action happens online. Actually it is a nihilistic view of a totally electronic society. Consequently, Cyberpunk has elements of film noir and detective stories.

Given this description, one realizes that Cyberpunk has flourished almost everywhere. In the gaming industry there is the highly anticipated game Cyberpunk 2077. In the movies there is the Matrix Trilogy, Ghost in the Shell, Blade Runner, and Altered Carbon and the series Love Death and Robots on Netflix. Cyberpunk has even its own expression in fashion - Cyberpunk goth.

Again, there are so many artists of this style. The art is mostly digital, that is concept art and illustrations. However, lately there have been some sculptures in the miniature world!

First, we have to mention Dylan Kowalski. He has a thing with female figures and he transforms them into Cyberpunk by adding artificial parts onto their bodies.

Ronan Le Fur is an artist based in France. Overall his work tends to be more cartoonish but maintains certain Cyberpunk elements.

As aforementioned, there are also many miniature sculptures with Cyberpunk themes. Their details are amazing considering that their scale is sometimes as small as 1:75mm.