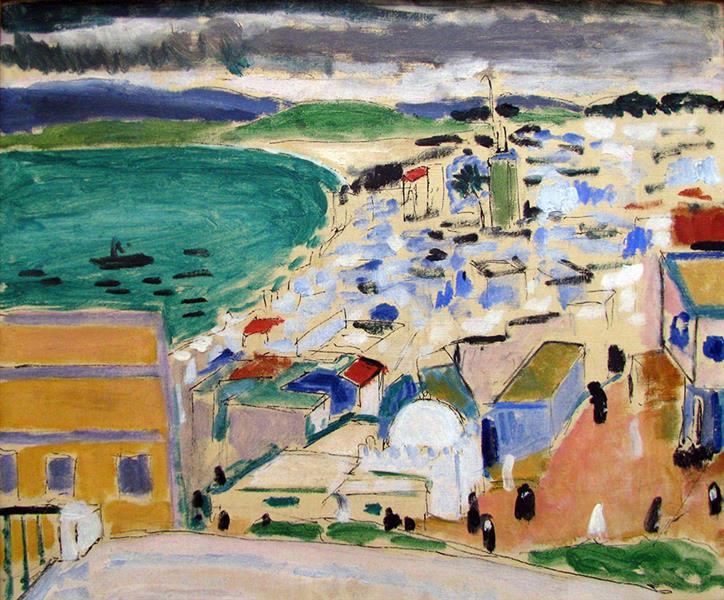 Until the advent of mass tourism, North Africa’s jewel, Morocco remained a relatively unknown world of Sultans, spices and sparse deserts. A number of artists throughout the 18th, 19th and 20th centuries visited this faraway land. Through their artworks, the public could learn about this unknown country. One of those was Henri Matisse.

Henri Matisse (1869-1954) was one of the 20th century’s most influential artists. Born in Bohain-en-Vermandois in northern France, he didn’t start painting until he was 20. After a year of legal studies in Paris, he returned to northern France to become a clerk in a legal office. During this time he attended a morning drawing class at a local art school. Then, in 1891, after recovering from a severe case of appendicitis, he left his job in law. He went back to Paris and began his journey to becoming a professional artist.

His career spanned an impressive six decades and he became synonymous with his expressive use of color and Fauvist style. Throughout his career, Matisse’s paintings most commonly depicted figures in landscapes, portraits, interior settings and nudes.

When we think of Matisse, Morocco is not a country that automatically comes to mind. Heavily influenced by the countries of the Mediterranean, much of his artwork is tinged with the color and the essence of these places. However, reaching a point in his career when he needed a little inspiration, he decided to visit Morocco in both 1912 and 1913.

The artist set out to discover this remote country and its people. Like many artists of this time, he went in search of North African culture, in search of the Orient, and the exotic. Matisse was drawn to this land by the images of lions, deserts, Sultans, jewels and spices. Above all, the main objectives of his travel to this faraway land were to find a new artistic direction and discover its culture.

Our journey to Morocco begins at the Grand Hotel Villa de France, where Matisse stayed during both his trips to Tangier. Landing in this port city in 1912, Matisse was at first disheartened. Writing to his friend, the poet Gertrude Stein, he complained that for five days “it had rained incessantly”. As a result, he was confined to his room. It was here that he first began painting in 1912.

With little else to inspire him, he started painting the objects and views he saw around him. Firstly, he turned to the flowers in his room, as can be seen in the painting Vase of Irises. Exploring the realms of light and color, this painting presents the flowers neatly placed on a marble top dressing table. Yet, it is his famous painting of the beautiful view across Tangier from the hotel room’s window that defined Henri Matisse in Morocco. Landscape Viewed From a Window, looking out over St Andrew’s Church to the kasbah beyond, is a classic example of Matisse’s bold use of colors to encapsulate landscapes. Nowadays, the hotel allows visitors into this room to look out upon the scene that Matisse saw all those years ago.

Enthralled with the view from the hotel, he painted another view in The Bay of Tangier. Painted from a different angle, he shows the blue and green tiled roofs of the city, as well as the sweeping bay and looming rain clouds.

The Medina and Surroundings

Our next stop, following Henri Matisse in Morocco, leads us to the kasbah in Tangier and its surroundings. It wasn’t long before the skies cleared and the hot North African sun shone down. As such, the artist was finally free to walk around and discover the city’s charms. However, not straying far from the hotel, he painted the majority of his work in Tangier’s kasbah, fortress, medina, and medieval walled city. Naturally, like anyone arriving in Morocco, he was eager to see Tangier’s kasbah, the maze-like market of the city.

Firstly, in Entrance to the Kasbah, he presents sharp contrasts between light and shadow, so characteristic of Morocco. A typical Moroccan scene, the painting illustrates the keyhole-like entrance to the market, with a local man at work on the left. The fierce blue of the sky clashes with the vibrant red of the floor to capture the vivid color contrasts.

Next, he leads us to the tomb of Sidi Boukoudja in Le Marabout. Located on the edge of the kasbah, this building is a typical representation of the type of architecture found in Tangier, and Morocco. The building, built in 1865, is used as a shrine to honor the life of Sidi Ahmed Boukoudja, a family member of the city’s then patron. Although Matisse typically painted unusual, abstract portraits, his paintings from Morocco were much more realistic.

Meandering around the zigzagging little paths of any medina may prove to be quite tiring. Perhaps a short stop off at a local cafe would be just the break one needs. This was the case with Matisse, who stopped at a charming little cafe next to the kasbah. Inspired by the bustling little cafe and its people, he captured the scene in Moroccan Café. This time using much lighter colors, he paints the cafe goers in their traditional grey jellabah and white turbans. Something that would have seemed very exotic to the Frenchmen at this time.

Mesmerized by its whitewashed houses, centuries old palaces and blend of North African culture, it is clear that Matisse was greatly inspired by Morocco. In 1915, long after his travels were over, he honoured his time in Tangier with the cubist painting The Moroccans. Above all, he captures the cafe culture of the city describing the artwork as “the terrace of the little cafe of the kasbah”. He depicts three distinct sections; a mosque behind a balcony with a flower pot, a vegetable patch and a man wearing a turban. The block of black color unites the three parts together, presenting an interesting perspective from the cafe where he sat.

For anyone planning a trip to the mesmerizing city of Tangier, let these paintings be a starting point. Follow in the footsteps of Henri Matisse in Morocco, and discover this awe-inspiring and vibrant land through his art.

If you find any joy and inspiration in our stories, PLEASE SUPPORT
DailyArt Magazine with modest donation. We love art history and we want to keep going with writing about it.
$5 $10 $25 $50 $100 MONTHLY
Related Topics:art travel, featured, Henri Matisse, islam, Morocco, Travel