The Most Bizarre Building in Scotland: Pineapple House 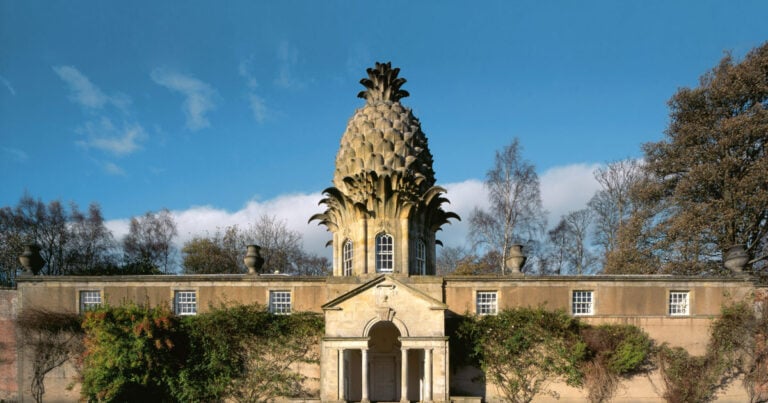 You likely would not connect pineapples and architecture, right? Wrong! There exists a real artistic folly, and not in Las Vegas where such a building might be expected, but in the ancient Scottish heights. It bears the (in)famous title of “the most bizarre building in Scotland”. Pineapple House really exists and you can go and see it in Dunmore, near Airth in Stirlingshire.

I Have a House, I Have a Pineapple… Pineapple House!

The pineapple was brought to Europe by Christopher Columbus in 1493. The fruits were mostly imported from the Caribbean island of Guadeloupe, which made them a very exquisite and rare delicacy. Therefore the pineapple became a symbol of wealth, prosperity and, what’s interesting, hospitality. This is why the 4th Earl of Dunmore, John Murray, decided to make his house an embodiment of such prestigious qualities.

When Was It Built?

The construction of the house began in 1761, but nobody knows when exactly the pineapple was built. Some say that it took place in 1776 after John Murray returned from Virginia where he was the last Colonial Governor. In Virginia there was a tradition that sailors returning from the sea would put a pineapple on top of their boat. Did John Murray want to announce in this way his glorious return to the motherland?

It’s a mystery who the designer of this funny but ingenious idea was. Nobody wanted to take credit for it? I wonder why…

Rumor has it that it could have been Sir William Chambers, who made similar designs at Kew Gardens, a botanical garden in London, UK. The pineapple is about 14 m high and is an example of a stonemason’s stunning work. As you can see, each of the curving stone leaves is separately drained to prevent the accumulation of water and frost damage.

If you would like to have a quirky vacation, you can rent a room in the Pineapple House!