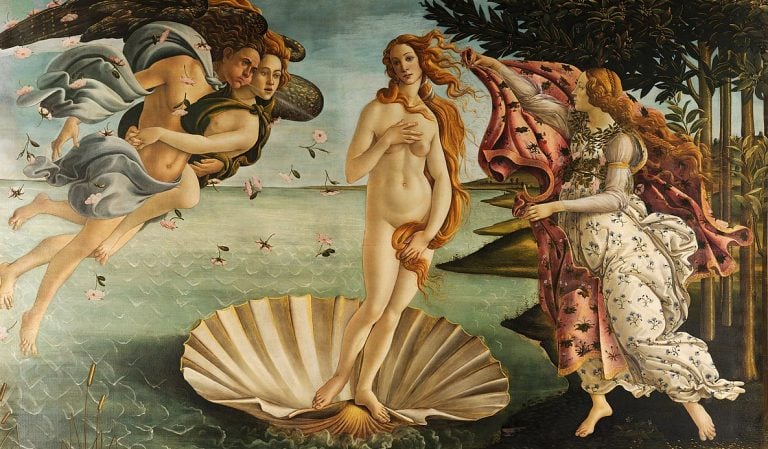 Venus, who wouldn’t envy her? She is the embodiment of beauty, sexuality, and love. She is perhaps the most often depicted woman in art history. And she was born out of seafoam, what could be more romantic than that? (Now I know why James Bond movies like to show the Bond girls walking out of the sea…) Venus was given different forms throughout the centuries and all her shapes are equally beautiful. So remember, all bodies are beach bodies as long as they want to go to the beach and they deserve to be immortalized in art. Get out of your seafoam and have some fun!

She is a must-see for everybody who visits the Louvre museum. People run through the gallery rooms to find her and take selfies. Swarms of paparazzi and admirers always surround her. No wonder why, just look at her perfect beach body – the missing arms are not a problem at all. She was found on the Greek island of Milos in 1820, probably chilling on the beach.

This Venus definitely has everything that the goddess of fertility needs: big breasts, rounded hips, and exposed vulva. She is a perfect woman, at least for Paleolithic communities. Such figurines of women were very common and probably served a ritual or symbolic function. Others see them as sex aids. A historic aphrodisiac anyone?

Look at her, she is just about to step down onto the shore from her shell. This Venus is newly born, but for a young Venus, she looks very grown-up to me. Moreover, the shell is a symbol of her vulva, which she modestly covers with her beautiful blond hair. She is just perfect, although a little bit modified: Sandro Botticelli extended her neck to make it look more graceful. This is plastic surgery in a Renaissance style.

This Venus has the face of a real woman. Dante Gabriel Rossetti had a favorite model, Alexa Wilding, who was featured in his paintings from the 1860s and 1870s. Interestingly, however, he didn’t have any romantic relationship with her, contrary to his other muses. At first, she did not model for this painting, but Rossetti repainted it with her face when the original painting failed to sell.

This Venus is one of many as she represents the motif of the so-called Venus Pudica which means a “modest Venus”. Her hair is tied back and the vase with a towel next to her suggests that she has just finished bathing. You can recognize any statue from this series by the positioning of the arms. She tries to cover her breasts and groin, but she does it in a way that we can see them anyway. Oh, those flirty Venuses…

Treat your body well and take it to the beach (if you like it) and/or to a museum to see some nice art!