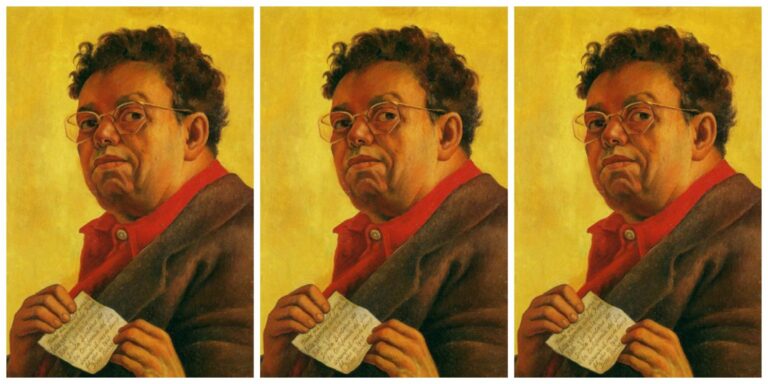 Diego Rivera is mostly famous for his controversial mural for the Rockefeller family and for being the husband of Frida Kahlo. Yet in his lifetime, he was the more famous one in their marriage, and definitely the more successful and appreciated one, too. No one could deny his talent and he became almost an iconic figure for the newly recovered Mexico. People adored him and his art. Their admiration was certainly valid: he was a great painter. And, as these self-portraits are going to prove, he was very self-aware.

Diego Rivera turned 21 in 1907. He was already pretty fat and over six feet tall. In this year he arrived in Spain where he studied art with the Spanish painter Eduardo Chicharro y Agüera. In Madrid, he had chance to see the masters such as Pieter Bruegel, Lucas Cranach, El Greco, Diego Velázquez and Francisco Goya in the Museo del Prado. After studies in Spain, Rivera moved to France where he met the most promising artists of his time: Pablo Picasso, Amedeo Modigliani, and Georges Braque.

In 1930 we see a change in Rivera’s style: he  moved away from the influence of French Cubism, which he had learned from Picasso and Braque in Paris, and instead he looked towards classical Italian art, especially the works of Giotto and the painters of the early Italian Renaissance. In 1920 he travelled across Italy to return to Mexico a year later.

In 1941, Sigmund Freud commissioned both Diego and Frida to paint their self-portraits for him. This painting, however, was for the actress Irene Rich and Rivera made it almost identical to the one for Freud. The Spanish dedication says: “I painted my portrait for the beautiful and famous actress Irene Rich, and it was in the city of Santa Barbara in Southern California in the month of January, in the year 1941. Diego Rivera.”

The year of 1949 was a tough year. Diego’s friend and companion, a muralist Jose Clemente Orozco, died. Diego’s request to be readmitted to the Mexican Communist party was rejected, although Frida was re-accepted. In this portrait, a 63-year-old Diego seems to be saying: I’m tired of travelling, people, paintings. I’m getting old, look what the time has done to me.