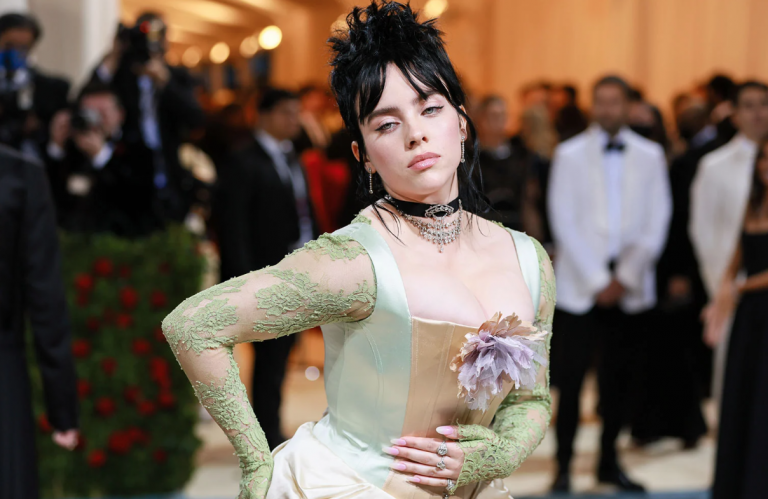 You only need type “Fashion” into the search bar on DailyArt Magazine and you will be met with numerous articles on the topic ranging from how fashion and art intersect, to the sculpture-like dresses of various designers. Furthermore, our writers have attempted to answer the age-old question of whether or not fashion is indeed a form of art. I think we all agree on the answer: YES. In that same line of thought, let’s check out how fashion designers and their creations mirror art throughout history. There is a place where fashion literally meets art, it is the famous Met Gala!

Outside of the numerous annual fashion weeks across the globe, one event that draws international attention is the The Metropolitan Museum of Art‘s annual Met Gala. It is a fashion event mixed with a fundraiser for the Met’s Costume Institute. Here are several examples of the amazing designs over the years compared to correlating art works.

It began in 1948 under the direction of fashion publicist Eleanor Lambert. Though it started as a more intimate occasion, it has now turned into one of the fashion world’s most sought-after invitations. Vogue’s Editor in Chief, Anna Wintour, took over running the event in 1995. She moved it to the first Monday in May and made it what it is today, the fashion event of the season.

This year’s Met Gala takes place exactly on this day, 2 May, and its main theme, In America: An Anthology of Fashion, will focus on the tradition of American design. To be precise, this year’s subject supplements the one from the previous year – In America: A Lexicon of Fashion. Both Galas revolve around an exquisite fashion exhibition at the Met, showcasing one certain aspect of America: the mixing of styles and cultures. This is evident in Naomi Osaka’s whole look from the Gala: the tennis star combined parts of both her Japanese and Haitian cultures.

It is always exciting to see how the guests interpret each year’s theme. This year was no different, in that while many took the theme quite literally, others picked and chose what aspects of the American theme to display for the evening. Homages were made to Cher, to Grace Kelly, to Country music, to overall moments of fashion throughout history, and even the Statue of Liberty.

Timothée Chalamet and French artist JR started the evening with an Instagram Live tour through the Frick Collection before Chalamet walked to the Metropolitan Museum of Art to co-host the Met Gala with a tennis player Naomi Osaka, musician Billie Eilish, and Poet Laureate Amanda Gorman.

Dan Levy’s one of a kind piece was a major fashion and artistic moment of the evening. He pulled out all the stops for his Met Gala debut. Maps of the United States covered the ensemble, complete with puffy sleeves, flowers, a collared shirt, and an embroidered image of two shirtless men kissing.

The overall inspiration taken from both designer and actor, pays a clear homage to the late American artist, David Wojnarowicz. The artist passed away due to complications from AIDS in 1992; And, according to Glamour Magazine, Dan partnered with his stylist, designer, and team, to showcase a powerful ensemble that celebrates “the resilience and the love and the joy” of the LGBTQIA+ community. It reflects two artworks by the late artist: both F*** You F–got F***er (1984), and Untitled (One Day This Kid…) (1990–91). The latter, seen on the clutch the actor carried to the Gala.

Natalia Bryant arrived to the Met Gala in a Connor Ives dress which was set to show in the Met Gala exhibition. The late Kobe Bryant’s eldest daughter, championed sustainable fashion in the ensemble with a look from American designer, Connor Ives. While it does not necessarily pay homage to an art work, the dress pays tribute to fashion from the mid-20th century.

Vera Wang designed this amazing dress for the pop singer Ariana Grande. The dress’ motif is the famous Last Judgement fresco by Michelangelo, one of the flag Renaissance artists.

Harry Styles’ effeminate style matches that of the King of France, Henry III.

Jared Leto walked into the 2019 Met Gala looking eerily similar to this painting by Caravaggio. Is he the new David?

Perhaps one of the most talked about looks of the 2018 Met Gala, Zendaya looked ready for a battle in her Versace chain-mail gown.

This 18th century inspired design, from head to toe looks like something a French Queen would wear. Model Amber Valletta resembles the Queen Marie Antoinette in Élisabeth Vigée-Lebrun‘s portrait!

Janelle’s look was all about surrealism. It was inspired by Picasso’s paintings and we wanted it to feel kitschy and funny…

Christian Siriano in an interview with PureWow.

Usually each year the Gala has a theme but there has been a handful of years without one. Designers are approached to construct unique designs for their clients for the event. Many of the most well-known “fashion” moments in the world come from those attending the Gala.

With the many themes throughout the years, it is always interesting to see who shows up wearing what and who will push the boundaries of the theme. While the 2018 Gala provided many examples that look as if they came straight out of a Renaissance painting, overall there are many more examples that were seemingly inspired by artists of the past.

This article only scratches the surface of the many collaborations and inspirations. Here is a list of themes from the past few decades of the Met Gala to help you further along in your search.