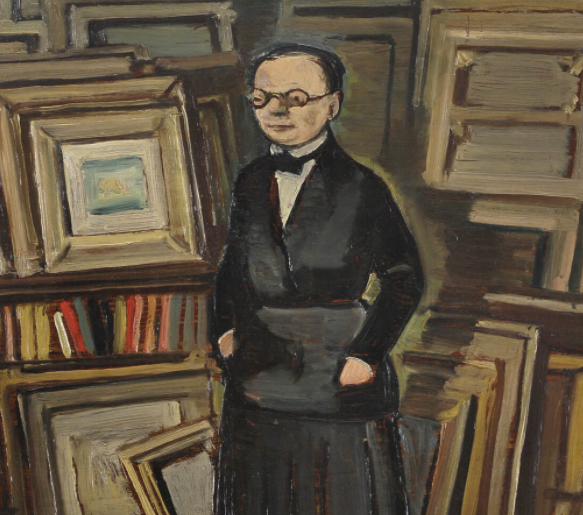 Do you know the name of the first female modern art gallery owner? Berthe Weill was born in 1865 and died in 1951 in Paris but nowadays she seems to be erased from memory. In fact, the B.Weill Gallery was the first gallery to sell Matisse‘s, Picasso‘s, and other great artists’ paintings. As a result, her role in the promotion of art in the 20th century is major. Hopefully, thanks to the work of the French researcher Marianne Le Morvan we have archival material and a biography about her. An exhibition about Berthe Weill took place in New-York and Montreal! Her memoir Pow! Right in the Eye was written for the occasion.

At a young age, Berthe Weill went to work with a cousin in Paris as a print and antique dealer. This cousin taught her everything there was to know about art dealing. She then used this experience and knowledge to open the B. Weill Gallery in 1901, thus becoming the first woman gallery owner in Paris. Her main ambition was to promote the work of young artists whose art broke the code of the Academy. This was something at which the avant-garde artists excelled.

What Is the Avant-Garde?

The artistic avant-garde first appeared in the 20th century. It started in Europe and then spread to the US through Abstract Expressionism. “Avant-garde” does not describe a single way of making art. It can be seen in many different movements including Futurism, Cubism and Expressionism. As varied as they are, these movements all have one common thing which makes them ‘avant-garde’: their vision of art. Avant-garde artists challenged figurative art and rejected the traditional perspective.

Gallerists, through their galleries and connections in the art market, played an important role in promoting the work of avant-garde artists. At that time the academic Salon refused artworks that did not match the official taste. We can take the 1863 Salon as an example. Cabanel’s Birth of Venus which is a depiction of a languorous, naked woman, was accepted. However, Manet’s Luncheon on the grass was rejected. This was because Manet’s naked women in the painting were neither goddesses nor historical figures. In fact, they were prostitutes.

As a result the Salon des Refusés was created to exhibit art which had a nonacademic subject or which was made using nonacademic techniques. However, this was not enough to support such artists. In order to live by their art, artists’ works must have some recognition, such as academic recognition. This is where the role of the gallerists became so vital. By buying, exhibiting, and selling their artworks, they offered avant-garde artists the recognition they needed from the art market.

The Artists in B. Weill Gallery

An Eye for Art

Berthe Weill used her own criteria in order to judge art. She had to feel the personality of the artist and the energy of the piece before she could consider a painting to be great work. Initally, her taste leaned towards Fauvism with its bright, unnatural colors. In fact, in October 1905 she became the first gallery owner to show the work of the Fauve artists. Her appreciation of the evolution of art as it developed from one movement to another then drew her towards cubism. This movement is known for its explorations of form expressed through three different styles: cézanian, analytical, and synthetic.

In her gallery, Berthe Weill exhibited a lot of artists from all over the world. Did you know that she was the first person to buy and sell a Picasso? She acknowledged him when he first moved to Paris, before he created the paintings that made him the famous artist he is today. The painting that caught her attention was Le Moulin de la Galette. This painting depicts a festive night in Montmartre with a touch that captures its gaiety and bustle. Later she also exhibited some of Picasso’s blue period paintings.

A Gallerist Dedicated to her Protégés

The list of artists exhibited in Weill’s gallery is very long. It contains names such as Toulouse-Lautrec, Matisse, Pierre Bonnard, Georges Braque, Marc Chagall, Diego Rivera, Odilon Redon, and many others. Moreover, some of the artists, such as Rouault and Picabia, were given a real opportunity by Weill because she exhibited their work while they were still unknown.

She was one of the only ones to give beginners a chance.

They had the privilege of being protected by a generous and passionate woman whose life was dedicated to modern art. Berthe Weill did not hesitate to sacrifice herself and the wealth of her gallery to help promote the artists she believed in.

She occupied a place of discoverer and protector of painters preferring to sacrifice herself to allow her artists to work, an essential step in the launch of painters’ careers.

Johannes Vermeer is both one of the most loved and most mysterious painters in European art. Moderately known during his lifetime, completely...