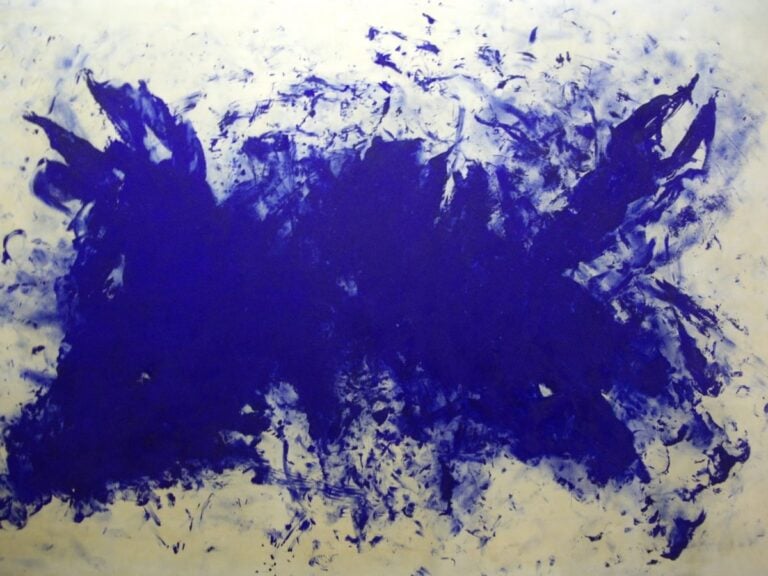 Yves Klein was a French artist and a leading member of the French artistic movement of Nouveau Réalisme. Klein was a pioneer in the development of performance art and a forerunner of minimal art and Pop Art.

Yves Klein is famous for one thing in particular, his International Klein Blue (IKB). It is a color of deep blue hue which was “created” by Klein and used in his art. In May 1960, Klein registered the paint formula under the name International Klein Blue (IKB) at the Institut National de la Propriété Industrielle (INPI), but he never patented IKB.

Klein, of course, created masterpieces also without IKB, you can read about his golden period in our other article. Today, we want to introduce you to 10 of his most famous works in blue.

Yves Klein began making monochromes in 1947. For him, they were a rejection of the idea of representation in painting and therefore the way to attain creative freedom. Klein did not give titles to these works but after his death in 1962 his widow Rotraut Klein-Moquay numbered all the known blue monochromes IKB 1 to IKB 194, in a sequence that did not reflect their chronological order.

IKB 45 was one of nearly two hundred blue monochrome paintings Yves Klein made during his short life. On May 12, 1962, Klein showed symptoms of a heart attack, and on May 15 he suffered a second, full heart attack after attending a friend’s opening night exhibition. Yves never recovered and died at his home on June 6, 1962, at the age of 34.

For his Anthropometries series, Klein used nude female models as “brushes.” He had a system of pressing bodies against the paper support. He staged the making of Anthropometries as elaborate performances for an audience, complete with blue cocktails and a performance of his Monotone Symphony—a single note played for twenty minutes, followed by twenty minutes of silence.

4. Anthropometry of the Blue Period (ANT 82)

Klein believed that International Klein Blue was the perfect instrument with which to elaborate his belief in spiritual powers and the immaterial. Ultramarine is the traditional symbolic color of the Holy Ghost in Christian religion and also evokes the expanse of the infinite sky and the depth of the oceans.

Klein was determined to evoke emotions and sensations independent of line, rendered objects, or abstracted symbols, believing the monochromatic surface released the painting from materiality through the totality of pure pigment.

Klein commented the use of bodies as brushes:

“In this way, I stayed clean. I no longer dirtied myself with color, not even the tips of my fingers.”

In 1970s, feminists like Julia Steinmetz analyzed Klein’s piece as him using female models as objects by slathering them across the canvas. In this way, Klein becomes the authoritative, male-dominated artist. But – it is only an interpretation.

In 1960s, Klein became fascinated by natural elements and would incorporate fire, water, sea sponges, and gravel into his canvases and sculptures. This resulted in a series of fire paintings, monochromatic relief paintings, and IKB sculptures that expressed cosmological ideas of infinite space – like this one here.

The Earth is a recurrent theme in Klein’s oeuvre. It appears in multiple variants and forming a series more globally entitled Planetary reliefs. In 1957, Yves Klein declared that the whole world is blue. He marked the occasion by creating a model globe in IKM relief blue, which he portrayed levitating in space, out of its stand and axis, to make it easier to contemplate.

9. The Victory of Samothrace

Starting in 1962, Yves Klein produced a series of plaster replicas of the Nike coated in dry pigment of his Yves Klein Blue affixed by resin entitled Victoire de Samothrace.

This is a plaster cast of Klein’s friend and fellow French Nouveau Realiste artist Arman. Klein molded the body of Arman in plaster and had it cast in bronze. The bronze was then painted with “Yves Klein Blue”, and the life-size sculpture was placed against a gilded wooden panel.