Fashion as Manifesto: Uniforms Designed for an Imaginary Space Station 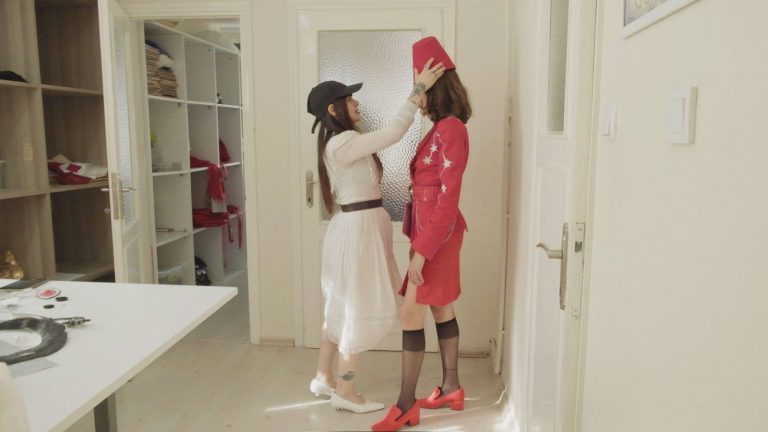 Using art as a manifesto of one’s feelings and ideas has always been common among artists and designers. Fashion designer Dilara Fındıkoğlu is no exception. For Odunpazarı Modern Museum, Fındıkoğlu designed a set of uniforms to manifest her empowering ideas. To execute these ideas, she dreamed of a “Turkish Space Station” and its workers. According to this dream, the workers in this station were going to wear uniforms that drew inspiration from the matriarchal culture of Anatolia, one of Fındıkoğlu’s main sources of inspiration.

Odunpazarı Modern Museum (aka OMM) opened its doors to visitors on September 2019. Designed by the Japanese Kengo Kuma and Associates, the modern wooden building is created in harmony with the quaint, old town it is situated in. The museum hosts several painting, sculpture, installation and new media artists in its permanent collection. One of OMM’s missions is to support young artists and designers and to grow stronger together with them. In keeping with this principle, the museum reached out to the London-based designer Dilara Fındıkoğlu for a collaboration.

Designer Dilara Fındıkoğlu was born and raised in Istanbul, Turkey. She then moved to London, UK to study fashion design at Central Saint Martins College of Art and Design. Fındıkoğlu’s free soul very openly manifested itself when she was about to graduate. Her designs were not selected for the collection of the graduation show at her college. Submitting to this decision, however, was not an option for the young designer. She first reached out to other students whose designs were not picked. With their help Fındıkoğlu then organized an alternative fashion show for the excluded designs. Consequently, this rebellious act of art got a lot of attention from press members and many designers. This organization was not to be the last time that Dilara rebelled against authority and revealed her ideas freely, though.

When it comes to her taste in design, Fındıkoğlu has a very distinct gothic-romantic style. She complements this with her obsession with red and black. Madonna, Bella Hadid, and Rihanna are among the celebrities that have worn Fındıkoğlu’s designs since her graduation.

Fındıkoğlu gladly accepted OMM’s proposal for a collaboration. Her concept was to create uniforms for “an imaginary Turkish Space Station that will settle in a new planet in the future”. For this, the designer infused her artistic vision with her interest in Anatolian mythology. The idea was to go against the patriarchal representations that prevail all over the world. To achieve this, Fındıkoğlu created uniforms with the faces/shapes of female Anatolian figures, such as Kybele and Medusa. In this imaginary space station, all representations are female and matriarchs hold the prevailing power. Therefore, by fusing mythology, feminism, and culture together, Fındıkoğlu manifests her acknowledgement of matriarchy as the source of power, intelligence, and inspiration.

About the Uniforms and More

During the photo-shoot, the uniforms were modeled by local people in a local highschool that is close to OMM. Meanwhile the whole collection Fındıkoğlu designed has been integrated into the museum. Two of the limited edition uniforms are on sale at the OMM shop. Also volunteers and interns working at the museum wear t-shirt and sweatshirt designs inspired by the collection. As a result, the amazing artist-museum collaboration keeps living in the small town of Odunpazarı, Turkey. It is a fascinating reminder of inspiration, creativity, culture, and the good old matriarchy.