Leonora Carrington And Her Surrealist Life In Her Own Words

Leonora Carrington (1917-2011) is considered one of the greatest and most neglected British Surrealists. Her life story is a fascinating one: she abandoned her family for a painter about 20 years her senior (and married), she lived in Mexico, and kept on painting even when she was 90.

"We were the old good bourgeoisie" 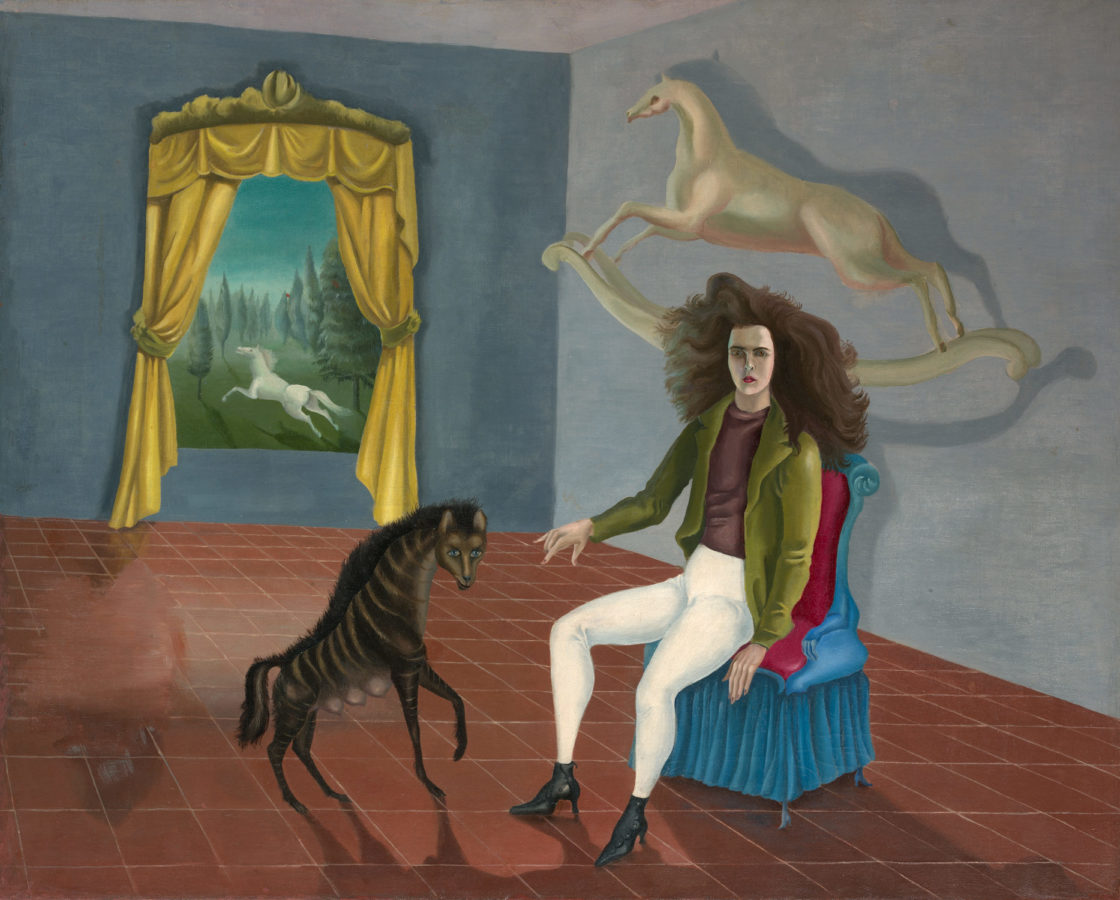 Leonora Carrington, Self-portrait, 1938/9, Metropolitan Museum of Art[/caption] She was the only daughter (she had three brothers) of a Protestant textile magnate from Lancashire, England and his Irish Catholic wife Maurie. Although she said Our family weren't cultured or intellectual - we were the good old bourgeoisie, after all, the family lived in a sinister mansion, an imposing edifice which often featured in her later paintings. The parents were very different in character, her workaholic father didn’t approve of Leonora, or Prim as the family called her, going to an art college, but her mother intervened and eventually Leonora went to study Old Masters in Florence (if you look at her paintings you can see the love for gold, vermilion and earth colours inspired by the Italian painting).

"Max, he taught me everything" 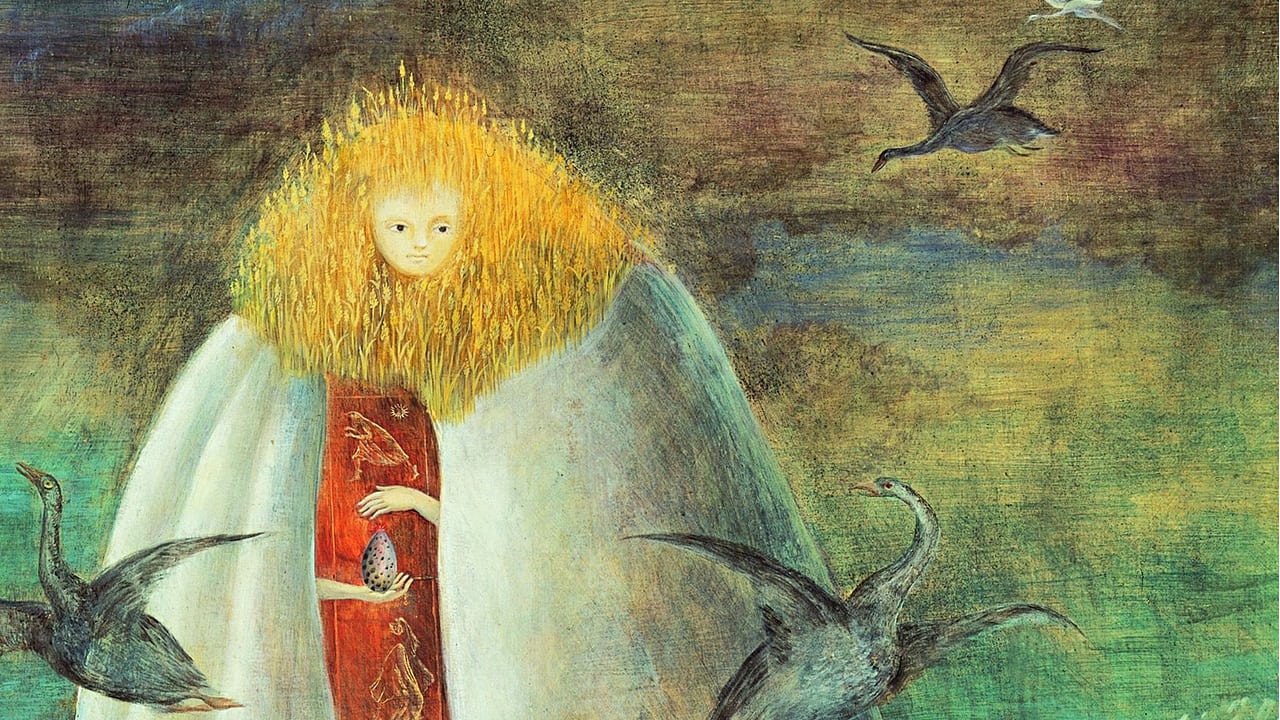 Leonora Carrington, The Giantess (The Guardian of the Egg), 1947, private collection,[/caption] When she returned from Italy, her father wanted to marry her off. He launched her as a debutante and held a ball in her honour at the Ritz (!!!!!), and she was even presented to King George V !!!!! Leonora despised it, however, and she poured out her loathing of the debutante season into a surreal short story The Debutante. And then a breakthrough moment arrived: in 1936, when Leonora was 19, the first surrealist exhibition opened in London. As she recalled: I fell in love with Max [Ernst]'s paintings before I fell in love with Max, it was like an epiphany. [caption id="attachment_11896" align="aligncenter" width="536"] 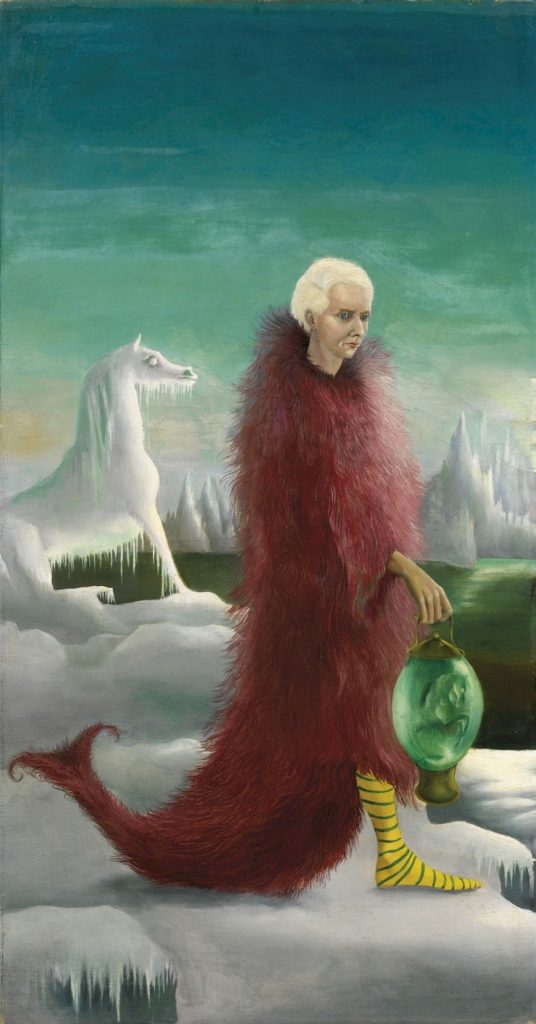 Leonora Carrington, Portrait of Max Ernst, 1939, private collection[/caption] She met him later in person at a dinner party and fell in love head over hills. They left London already together to settle in Paris but Leonora had to share Ernst with his wife with whom he was still spending time, but at that point she Leonora didn’t mind. She plunged into Paris and art: from Max I had my education: I learned about art and literature. He taught me everything. She met Picasso: A typical Spaniard - he thought all women were in love with him, [but] well, I certainly wasn't. Though I liked his art." And Salvador Dalí: "I met him by chance one day in André Breton's shop. He certainly wasn't extraordinary then: he looked like everyone else. It was only when he went to America that he started looking extraordinary.

"Take me to the Mexican embassy!" 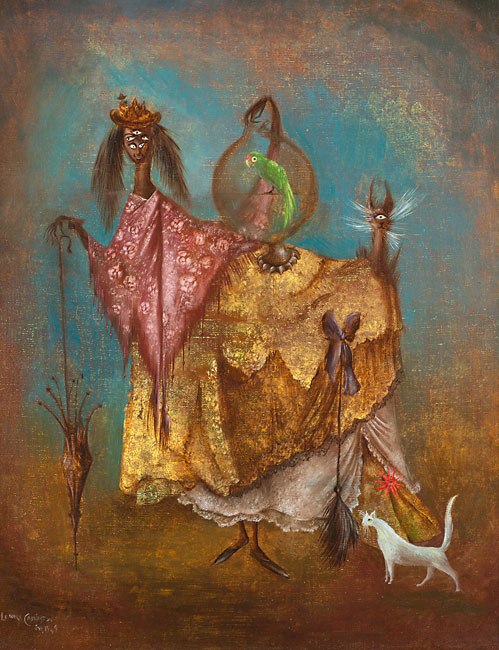 Leonora Carrington, La artista viaja de incognito (The Artist Traveling Incognito), 1949, Weinstein Gallery, San Francisco[/caption] In 1938, right before the outbreak of the WW2, Ernst left his wife and the couple moved to Provance. It was a great time of artistic creativity, one painted the other and Leonora also took up writing.  Their idyll was shattered by the arrival of the Nazis who considered Jewish Ernst as an enemy alien and subsequently interned him. Sorrowful Leonora fled to Spain where she had a mental breakdown and ended up in a psychiatric hospital in Santander. Leonora's father tried to get her out of the hospital and have her admitted to a sanatorium in South Africa instead. She didn’t want that and while waiting for a boat with her father’s business contacts, she escaped and jumped into a taxi. Take me to the Mexican embassy! she shouted. It was the first place that came to her mind, as she thought of her friend from Paris, Renato Leduc, who had been a Mexican diplomat. The only solution to her predicament he could think of was to marry her. So they did.

"It was very weird" 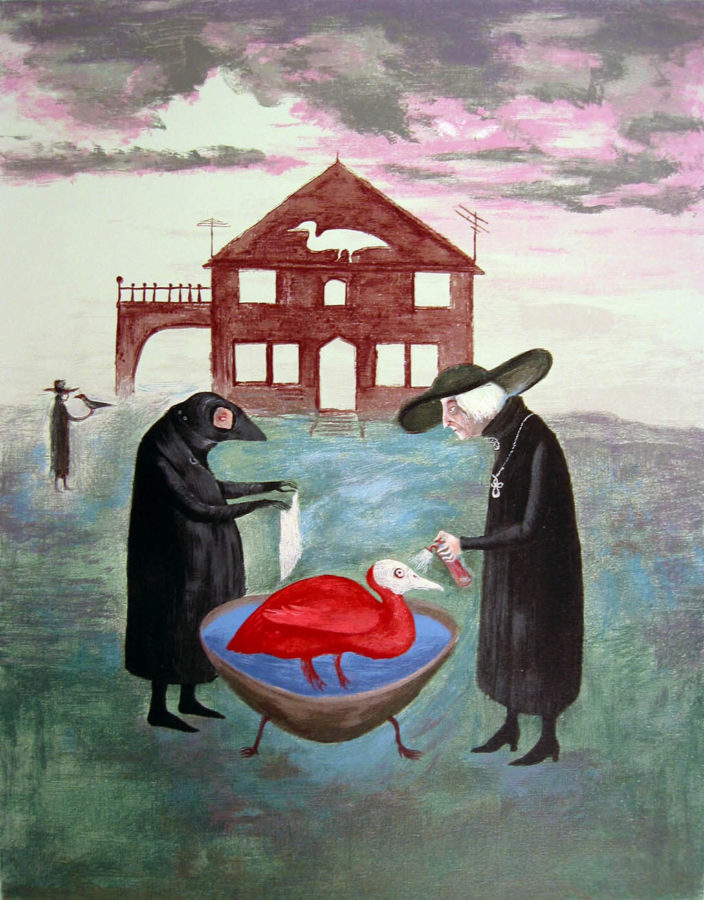 Leonora Carrington, Bird Bath, 1974, Museum of Latin American Art, Long Beach, California[/caption] It was a marriage of convenience, and the issue got even more complicated. While the new weds were waiting in Lisbon for the boat to take them to the US, Ernst showed up in town to take the same boat. He was liberated and now seeing the art collector Peggy Guggenheim, his new lover. Leonora described this time as they waited together to go to New York as "very weird". Especially that together with them were also Peggy's ex-husband, Ernst's ex-wife and a group of children. [caption id="attachment_11843" align="aligncenter" width="620"] 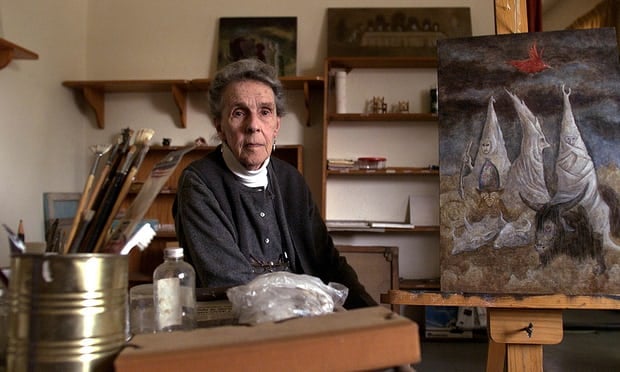 Leonora Carrington in her house in Mexico, 2000. Photo: Reuters/ Daniel Aguilar[/caption] As Leonora arrived in New York, she dissolved her marriage and moved to Mexico which gave her a new inspiration boost. She did sculpture and painting, which now was inhabited by Aztec and Mayan myths. She also met a Hungarian photographer (and the darkroom manager for Robert Capa during the Spanish Civil War), Csizi ("Chiki") Weisz who a few years later became her husband. It was a happy marriage, they spent together over six decades and they had two sons, Gabriel and Pablo. In 1970, she helped found the Women’s Liberation Movement in Mexico. She died at 94.