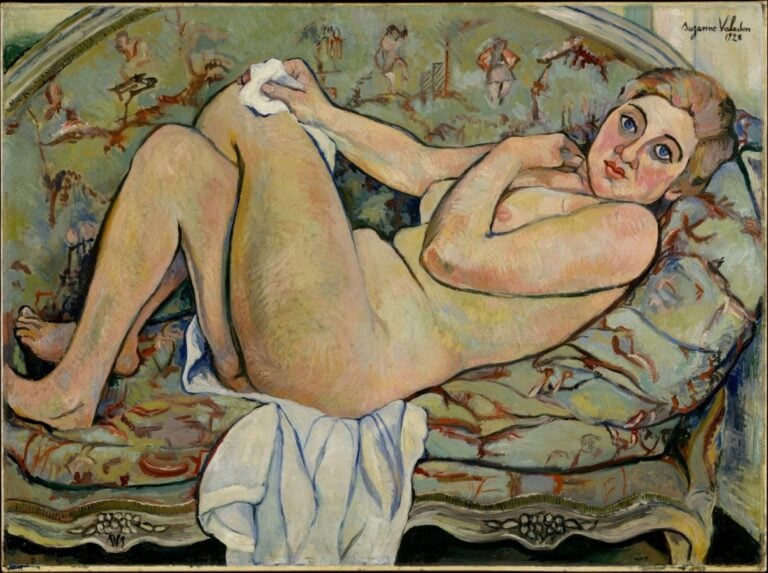 Female nudes are prevalent throughout art history. There are the ancient mythological goddesses, the Biblical Eves and Susannas, and then there are the female nudes, depictions devoid of any costume either mythological or literal. For those nudes, the formula is basically the same: a beautiful woman lying outstretched on a bed. She is always created by a male artist for the male gaze. Artist Suzanne Valadon brought something different to the nudes: the female gaze.

What nude might come to your mind first? Titian‘s Venus of Urbino?

You would be forgiven if that’s what you thought of as they are considered some of the most important works of art within the art history canon. But what about this one?

It is no coincidence that this work of art of such a realistic nude woman was completed by a woman who lived fully and unapologetically. Suzanne Valadon was born in 1868 and grew up in Montmartre, the center of Parisian art and excitement in the late 19th century. She held a range of jobs beginning at a young age, including trapeze artist, before becoming a model for artists like Pierre-Auguste Renoir and Henri Toulouse-Lautrec, who dubbed her “Suzanne”. As she modeled, she also observed. She learned skills and picked up techniques that she incorporated into her own work. Valadon became good friends with Edgar Degas, who was by then a well-known and popular artist. He essentially validated her as an artist when he became the first person to purchase her work.

With her 1928 Reclining Nude, Valadon reclaimed the female nude and did so on multiple levels.

Titian, Ingres, and Manet controlled how these nude women would appear and deliberately chose to have the women on display for all to see. The female nudes are placed on beds with rumpled sheets as if to underscore their societal roles. There is an imbalanced power dynamic between the artist and subject.

Suzanne Valadon chose something different. Instead of a lithe body stretched out, Valadon folded the model up, limiting and controlling what could be seen. Also, by positioning her like this, she remains contained within the sofa. With her legs pulled up and crossed, her body reacts creating a roll in her stomach. A very natural response, unlike the very unnatural extra vertebrae Ingres decided to include in the Grand Odalisque because it was more aesthetically pleasing. Additionally, if Valadon’s model were to stretch out fully like her counterparts, her legs would dangle over the arms of the couch, which is decidedly unsexy. More like a Saturday morning, not-in-the-mood-to-shower-yet pose.

Created for the male gaze, by male artists, the first three women are subjected to the viewer’s once-over. In return, they look back, each with a different expression. Venus with her coquettish head tilt, the Odalisque who glances back to ensure we see her, and defiant Olympia. Valadon’s model seems tired and even a little indifferent. Was this the attitude of the artist, having posed so many times before, coming out in her own painting? Am I projecting the life of the artist too much onto the painting? Perhaps, but whatever the expression is, it does not have the unsubtle allure of the others.

This is not the very clean and precise brushstrokes of Titian and Ingres, though I can (unsurprisingly) see a kinship with Manet. Valadon’s black outline is unsteady yet charmingly underscores the rawness of the painting. The couch has been cropped, its design is indistinct, as if it is unimportant, simply serving as a prop. It is important however – the curves of the couch’s frame match the curves of the woman’s body and the green of the cushions melds perfectly with the model’s skin, hair, and eyes creating a lovely cohesion of color.

It’s always interesting to think about the choices an artist makes. Had she thought about doing a nude like this after all the times she had been a model? Did she and the model share stories about other artists? Commiserate about what it was like to pose for hours on end?

Maybe I am projecting again, but with a painting like this it is hard not to get lost in the possibilities.23