10 Paintings That Will Bring Sunshine to Your House 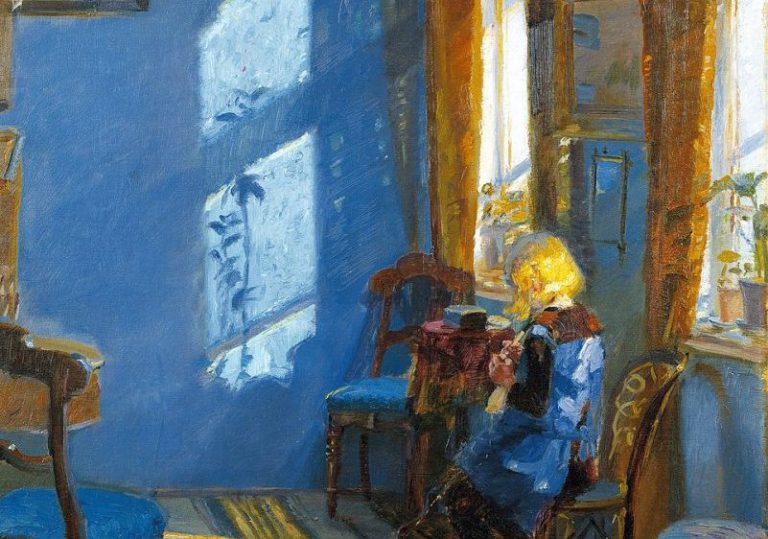 10 Masterpieces for Boosting Good Feng Shui in Your House

Throughout history, artists have used light and shadow in their work to create the illusion of a three-dimensional space on a two-dimensional surface. But what if the light in artworks could have a much more powerful effect on the space around them and the observer? So, reminiscing the summer, happiness, and the good life, here is a selection of 10 paintings that will bring sunshine to your house and hopefully into your heart too!

1. The Happy Lovers by Jean-Honoré Fragonard

Jean-Honoré Fragonard (1732-1806) was a French Rococo artist. The painting depicts a joyous scene between two lovers touched upon by the charming sunshine. Surrounded by lively vegetal elements, the youthful couple enjoys a memorable retreat. The bright colors of their clothes highlight the pair of lovers and emphasize the delicacy present throughout the painting.

Joseph Mallord William Turner (1775-1851) was an English Romantic painter, printmaker, and watercolorist who specialized mostly in landscapes. When he visited Venice for the first time in 1819, he created a series of lucid watercolors, Venice: San Giorgio Maggiore — Early Morning being one of them. Turner elegantly sketched in pastel cold colors the island of San Giorgio Maggiore at the earliest hours in the morning. If you look close enough, you can spot the Basilica San Giorgio Maggiore.

Ground Swell is a painting by Edward Hopper (1882-1967), one of the most famous and important American Realist painters. Unlike other painters, he had a distinguishable imaginative artistic approach to what we understand by Realism.

Firstly, a groundswell (or a ground swell) is the term used for a group of waves caused by a faraway storm. The artwork depicts four people in a secluded boat on the sunlit sea, presumably during the summer. They are gazing at the bell buoy, which, some may argue, is an ominous signal of impending disaster coming their way. Above them, light but remarkable clouds are starting to gather. Nonetheless, the painting still impresses through its rich tones of turquoise complemented by the electric white of the boat.

The American painter John Singer Sargent (1856-1925), worked on Oranges at Corfu during a painting expedition he took with his friends and sister to the island of Corfu, Greece. The greenery, the distant islands, and the Mediterranean sea gracefully shape a relaxing painting filled with sunshine. In a delightful play of light and shadow, the effervescent colors give life to the orange tree groves.

Although Sargent is most notably known for his luxurious portraits, his landscapes and watercolors are equally as enticing, as they hold a more emotional and personal tone.

English painter William Holman Hunt (1827-1910) was one of the founders of the Pre-Raphaelite Brotherhood, known in their artworks for complex details, an abundance of intense color, and evolved symbolism.

Our English Coasts is a true head-turner. Hunt painted the cliffs, sheep, and other elements of the artwork from different viewpoints. For instance, as a model for the butterflies in the left lower corner, the artist used a live specimen indoors.

The artwork immortalizes a splendid sunny summer day on the coasts of England. Impressively, by receiving vivid expressions, the sheep replace the conventional characters present in art.

It showed to us, for the first time in the history of art, the absolutely faithful balances of colour and shade by which actual sunshine might be transposed into a key in which the harmonies possible with material pigments should yet produce the same impressions upon the mind which were caused by the light itself.

The French Neo-Impressionist painter Paul Signac (1862-1935) pioneered together with his mentor, Georges Seurat (1859-1891), Pointillism — a painting technique that involves using small dots of color to create an image.

In Port d’Antibes, Signac chose a wide selection of vibrant colors to illustrate the light before sunset. Some fishing boats float on the water. On one of them, the fishermen are unloading their catch of the day. Meanwhile, in the foreground, a majestic pine tree in exotic tones frames the corners of the painting. The golden sunshine in this painting illuminates the paradisial composition. However, the cold Alpes Maritimes counterbalance the welcoming warmth of the ensemble.

If you look close enough in the distance, you can discern the old town and Château Grimaldi, where Pablo Picasso (1881-1973) used to paint in 1946. No wonder the miraculous French town of Antibes, situated on the coast of the Mediterranean Sea, is such an attractive destination for artists!

Fascinated by the intricate architecture of the monument, Claude Monet (1840-1926) painted between 1892 and 1993 over 30 versions of the famous Rouen Cathedral from Normandie, France.

With careful brushstrokes, Monet manages in his painting to render the bright facade of the cathedral covered by sunshine. Additionally, the opalescent colors enhance the dreamlike and jovial atmosphere of the luminous scene. Like in this example, most of the versions of the cathedral were finished by Monet in his studio in Giverny. As a result, they might be signed and dated 1894.

8. Sunlight in the Blue Room by Anna Ancher

Sunlight in the Blue Room is a painting of the artist’s daughter crocheting with her back turned to the viewer in her grandmother’s blue room. Anna Ancher (1859-1927) was a Danish impressionist painter who was associated with the Skagen art colony. The Skagen Painters were a group of Scandinavian artists who gathered in northern Denmark to paint en plein air like the Impressionists. As such, they wanted to separate themselves from the rigid Royal Danish Academy of Fine Arts and the Royal Swedish Academy of Arts.

A sense of stillness and peace persists in the painting as the child concentrates on the task at hand. Sunshine in the painting gently enters through the windows and engulfs the room in rich, bright tones. Ancher’s alluring play of color and light creates a unique dynamism in her paintings. Nevertheless, the simplicity of the subject conveys an intimate connection between the observer at the depicted scene.

9. A Wheatfield, With Cypresses by Vincent van Gogh

The Dutch post-impressionist painter Vincent van Gogh (1853-1890) describes A Wheatfield, With Cypresses (currently at the Metropolitan Museum) as one of his “best” summer landscapes. However, the chosen picture for this article is a studio rendition from September of the same year, which is now exhibited at the National Gallery in London.

In this painting, with emotion overflowing, Van Gogh managed to creatively balance various contrasting elements. Firstly, the vertical cypresses nicely accompany the horizontal playful lines of the silky clouds. Even though the covered sky hides the sun, the soft tension between cold and warm pastel tonalities ensures the brightness of the landscape.

Although this time in a nocturnal setting, a similar theme can be encountered in Van Gogh’s The Starry Night — an interpretation of the artist’s view from the east-facing window of his room from the mental hospital in Saint-Rémy, where he spent one year due to his precarious mental state.

One of the most important artists of the 20th century and the initiator of Fauvism (from the French term “Fauve”, which means “wild beast”), Henri Matisse (1869-1954) was a French artist known for his spectacularly fluid shapes and vibrant colors in his compositions.

At an impressive scale of 176.5 cm x 240.7 cm, Bonheur de Vivre presents a spirited scene in nature immersed in the summer’s sunshine with unique nude characters. For instance, the red and green tonalities embrace a joyful contrast that animates the imaginative landscape studded with different kinds of vegetation. Some of the figures are engaged in artistic activities — such as dancing or singing — while others are simply enjoying the beauty of the countryside. What a wild depiction of pleasant idleness; or how the Italians say: dolce far niente!