Spinning Colors: Turner’s Changes in Technique from Objects to Colors 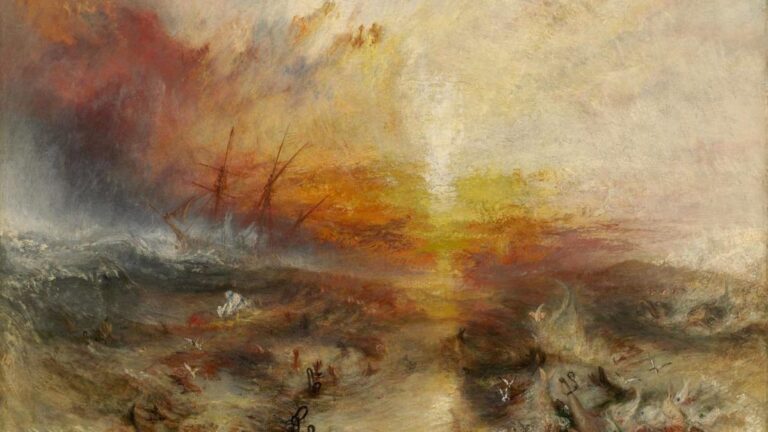 JMW Turner’s paintings were accepted for their utmost quality from almost the instant he exhibited his first paintings to the wider public. His status is such in the present day that he is widely accepted as the quintessential English Painter, capturing beautiful scenes in a traditional style of Western European, such as those in Clare Hall and the West end of King’s College Chapel, Cambridge or Ingleborough from Chapel-Le-Dale.

Why
then would he choose to change direction to such a degree as to invite
criticism from the art community, creating artworks that had lost definition
and ultimately looked less like the chosen
subject, and more like a waking dream or a hallucination?

The Fighting Temeraire, tugged to her last berth to be broken up, (1838) is a small step in Turner’s new direction, and although the painting is still a thing of beauty, it is much more vague than his earlier examples. The boat is not in focus and we only see the narrow front, instead the star of the show is surely the immense space on the right where the sun creates its very own light show.

The most impacting aspect of Turner’s new technique comes from his newfound appreciation of German color theorist Goethe and his pseudo scientific text. In Theory of Colors (1810) Goethe expresses an opinion on almost each combination of color, including the effects of putting yellow above much deeper colors, as is seen in the setting sun in The Fighting Temeraire. The painting focuses on the three primary colors as the main color methodology; Turner is exploring the strengths of limiting his color palette to the most rudimentary colors, using just red, blue and yellow.

In the Slave Ship (1810) we see the next level of exploration of the technique where Turner begins to mix the three colors into a circle. According to scans of his paintings of this era he doesn’t follow any pencil markings, he instead puts great swathes of the primary colors onto the canvass and “smooshes” them across the canvass in a circular direction, finding fresh colors and moods from his base urges, as he swirls the colors into the back drop of the painting. The technique is most evident in his Light and Color (Goethe’s Theory) – The Morning after the Deluge – Moses Writing the Book of Genesis (1843), where the swirl of colors is laid bare; the only details we see are either stick figures or the barely visible form of Moses at the centre.

Compare this image with Monet’s Impression Sunrise (1872), painted almost thirty years later, and we see a similarity in the artist’s aims. The detail becomes secondary to the effects of the colors, instead a visual spectacle arrives at our eyes as a chord of color rather than an accurate representation of the scene.

The story of the slave ship Zong is hugely delicate and the fact that Turner finds the story of the slaves being pushed overboard so arresting is testament to the changing attitudes of the establishment at the time. By this point in history the idea of importing slaves from vulnerable foreign lands had become ever more detestable, the British wanted to be seen as the most forward thinking countries in their abolishment of slave trade. Though many countries continued to house slaves some time after, as it was only the trade that was taken away.

The painting does at least two things: it demonstrates a respect for the abhorrent subject matter as the sick and dying slaves are thrown overboard for their insurance money, but it also shows Turner’s facility to innovate in such a way that only enhances the narrative. We see the impressive but vague detail of the ship, a far off beautiful sunset – reminiscent of The Fighting Temeraire, the doomed submerged slaves and the beasts of the sea that attack them. Everything is set against an emotive and deep-colored backdrop that tells so much about the time of day as the sun sets on the men thrown overboard; the embedded emotion of the tragic narrative is a rich soup of technique and color.