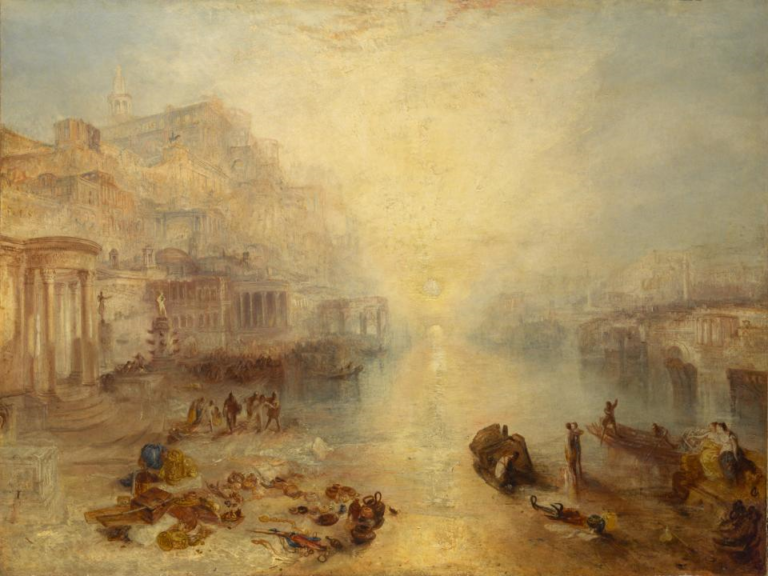 This petite (9.46 x 12.50 cm) oil on canvas by J.M.W. Turner contains big things: big landscapes, big stories and big skies. It is an imagined scene from 1st century Rome: the departure of Ovid into his famous exile.

All Roads Lead to Rome…

As well as contemporary scenes and veritable landscapes/seascapes, Turner also created historical, literary and mythological paintings. In Ancient Italy — Ovid Banished From Rome a mix-match of temples, triumphal arches, and statuary from different periods create this rendition of 1st century Rome. The topic too, the story of Ovid’s banishment, is a blend of equal parts legend and historical fact.

The Exile of Ovid

Ovid Publius Naso (43 BC – 17/18 AD) wrote his own tragic story of his miserable exile in three books of poetry (Tristia, Ex Ponto, and Ibis).

This sunset scene is a fantastic example of the revered use of yellow in Turner’s paintings. Although at the start of his critics laughed at him for putting yellow everywhere, it soon became a signature and masterful trademark.

In Ovid’s exile poetry a whole poem (Tristia 1.3) is about Ovid’s emotional departure night from Rome. Despite Ovid describing night-time as the setting Turner’s sunset captures an appropriate mood. With the hazy details and bright, setting sun, Turner’s painting feels like a fitting farewell to the Golden Age.

In the lower left of this painting we see a depiction of a tomb, bearing Ovid’s full name (Ovid Publius Naso), so, obviously, this is not a literal painting. Ovid is departing Rome not already dead! Also the location of his burial is somewhere on the Black Sea and unknown.

Ovid, who died after about a decade in exile, would often write about his own death and lament the fact he would not be buried in his beloved city of Rome. However, the legacy of Ovid is his literature – and the art it inspired – is better than any real tomb; perhaps Turner realised this?

Turner’s of depiction Ovid’s departure is appropriately ambiguous. Which figure is Ovid? Is he even in the painting? With Ovid’s oeuvre of poetry that speaks through unreliable but knowable narrators, and the first person poetry from exile, “Who is Ovid,” is a very apt question.

There is also mystery around the cause of Ovid’s banishment by the Roman Emperor Augustus. The only clue is a mere three words: “carmen et error” – a song and a mistake. Which poem was so controversial that it deigned exile? What did Ovid do that was so unforgivable?

Turner like Ovid, who wrote reams of poetry on the topic of love, can be described as a romantic. The art term “Romanticism” is the label for the period in western art between 1780 to 1830. Emotions were on full display, in contrast to the traditional ideas of classical restraint. In British art, Turner is known for embracing Romanticism through his depictions of nature.

Ancient Italy — Ovid Banished From Rome certainly depicts emotion, look at the figures whose various poses display a range of feelings under categories of anguish, anger, and sadness.

“…the skies over Thanet are the loveliest in all Europe”

As in many of Turner’s paintings Ancient Italy — Ovid Banished From Rome is centred on a massive sky and the water below (The river Tiber or the sea – you decide).

Those of you not skim-reading will realise that Thanet is most definitely not in Rome. Rather, it is in Kent. Turner was in love with the light in this area of the world.

“Where therefore, and in this very town of Margate, he lived, when he chose to be quit of London, and yet not to travel”

In particular, the sea and skies of Margate (where he went to school and where the new Turner Contemporary is located) were a great inspiration for him. As they are for living artist Tracey Emin who also came from the Kentish town.

While Turner and Emin escape the smog of London to the fresh air of Margate, Ovid longed for his beloved city from his exile on the coast of the Black Sea.