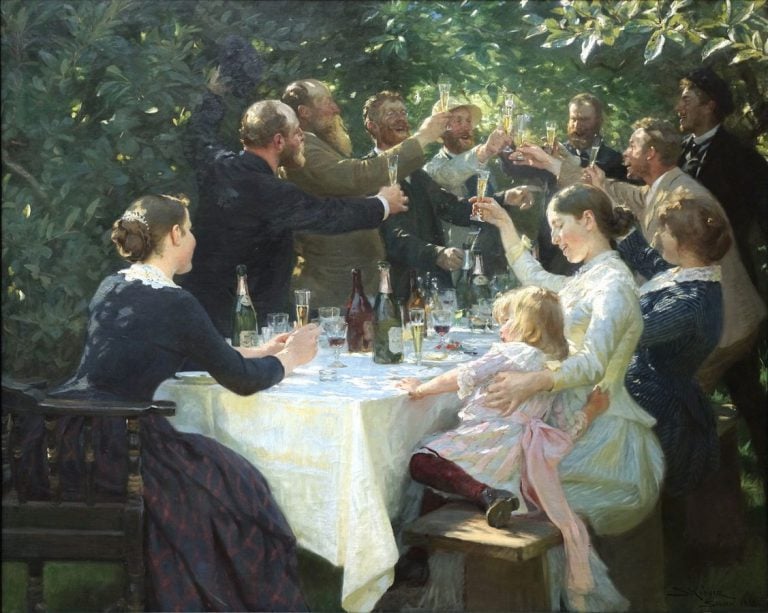 Situated in the northernmost point of Denmark, the small town of Skagen is a quaint place with a lot of light and great views. As a result, the town remained a source of inspiration for several artists for many years. In particular, the group of painters we know today as the Skagen Painters found this little town to be a safe haven to express themselves freely in their art.

The First Visit to Skagen

In 1874 two painters, Karl Madsen and Michael Ancher, visited Skagen to observe and paint the locals. There, met the Brøndum family, who owned the Brøndums Hotel. This place was later going to be a meeting point for the group of painters. After 1874, Karl Madsen, Michael Ancher and several other painters started visiting Skagen every summer. The little fishing town offered a peace of mind and proved a source of inspiration for the artists with its simple style of living.

Although several artists joined the group for shorter periods of time, the most outstanding members were Marie and Peder Severin Krøyer, Anna and Michael Ancher, Viggo Johansen, Karl Madsen, Laurits Tuxen, Carl Locher and Thorvald Niss. In addition to these Danish natives, Oscar Björck and Johan Krouthén from Sweden and Christian Krohg and Eilif Peterssen from Norway also joined the group during summer holidays. The fact that Michael Ancher married the Skagen local Anna Brøndum and Viggo Johansen married Anna’s cousin Martha Møller created a family bond between the artists. With all the family and friends, the group liked assembling and enjoying big meals together.

Karl Madsen and Michael Ancher left the Royal Danish Academy of Fine Arts in Copenhagen, thinking the education there centered only around the historicist and neoclassicist style. They, on the other hand, wanted to experiment with a more modern style of painting as was popular in Western Europe at the time. Their intention was to be more representative of everyday life. This was the initial reason why the artists chose the small town of Skagen as their meeting point, instead of a bigger city. Emulating the French Impressionists, in Skagen, the painters could experiment with their style and execute their art without any restrictions.

Skagen painters commonly used hasty and dense brushstrokes. This echoed the work of the Impressionist painters who they considered as a source of inspiration. The everyday life of the villagers as well as their own was their biggest source of inspiration as subject matter. The paintings mainly depicted scenes such as the fishermen fishing, women sewing, people eating and praying. They also enjoyed making portraits of each other, being a closely related group with tight bonds.

Anna and Michael Ancher lived with their daughter Helga in a spacious house on Markvej 2, in Skagen. After her parents passed away, Helga Ancher, also a painter, kept living in this house that she inherited from her family. Having no children, Helga wanted this house to become a museum after her death and, when she died in 1964, the house was restored and her wish fulfilled. The museum opened in 1967, as Anchers Hus (Anchers’ House in Danish). It has a large collection of the works of the Ancher family, as well as that of several other painters, as the family liked to collect artworks just as they liked to paint.

Skagens Museum was founded on 20 October 1908. This took place in the dining room of Brøndums Hotel led by the group members Michael Ancher, P. S. Krøyer and Laurits Tuxen. On 22 September 1928, the new museum building with a bigger space and better conditions opened. The iconic dining room of the Brøndums Hotel, where the painters once assembled, ate and played games together, was transferred to the new building. Because of its historic and symbolic importance, the room is still protected and kept intact just as it was at the turn of the 20th century. Today, the museum hosts over 1800 works in total.