Masterpiece Story: The Lighthouse at Honfleur by Georges Seurat 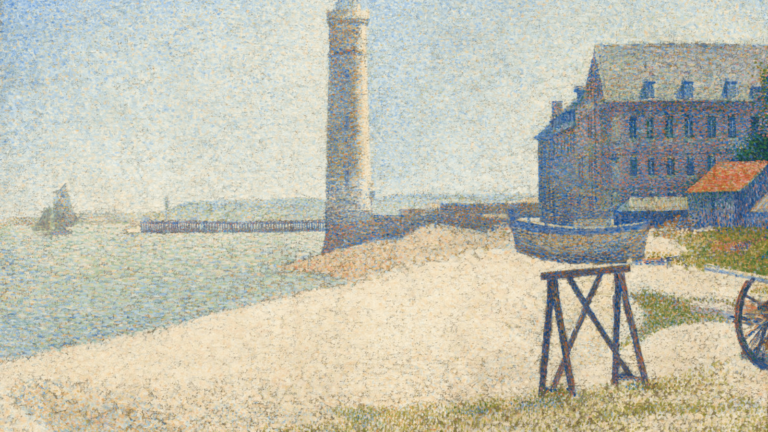 Post-Impressionism 101: Everything You Need to Know

The Lighthouse at Honfleur is a Pointilist painting by the French artist Georges Seurat. Let’s learn a little more about what made his paintings, and especially this one, so unique.

The first thing you’ll probably notice about this painting, as well as Seurat’s famous A Sunday Afternoon on the Island of La Grande Jatte, is that it’s made of tiny little dots. To 21st-century eyes, it might look pixilated. But, of course, pixels didn’t exist in Seurat’s day. So, what’s going on here?

Georges Seurat (1859–1891) developed and practiced a style that came to be known as Neo-Impressionism. Neo-Impressionism was very interested in optics, which is the study of light, particularly as it relates to sight. Seurat and other Neo-Impressionists wanted to use new ideas in optics to make more effective paintings. The dots that you see in The Lighthouse at Honfleur represent one way in which Seurat attempted to do that. He believed that putting tiny dots of complimentary colors next to each other and letting the viewer’s own eyes mix them would create more effective colors than he could achieve by mixing paint. This practice is also sometimes called Pointillism or Divisionism, depending on whether dots or short lines of color were used.

The term Neo-Impressionism suggests that Seurat’s art had something in common with Impressionists, and he did exhibit at the 8th Impressionist exhibition in 1886. He also shared subject matter, including landscapes, bathers, and scenes of modern life, with artists like Claude Monet and Auguste Renoir. The seascape in The Lighthouse at Honfleur could be easily painted by Monet as well. However, Seurat is more correctly considered a Post-Impressionist – someone who started with the Impressionists’ ideas and developments but then took them in his own direction. Unlike the Impressionists, whose very name came from their emphasis on spontaneity and momentary visual “impressions”, Seurat’s focus was thoughtful and scientific. Besides reading widely on optics, he also made many studies before completing major paintings like La Grand Jatte.

Neo-Impressionism never became a popular style, but it had a big impact on the future of art. Seurat influenced many generations of later modernists, including Vincent van Gogh and the Surrealists.