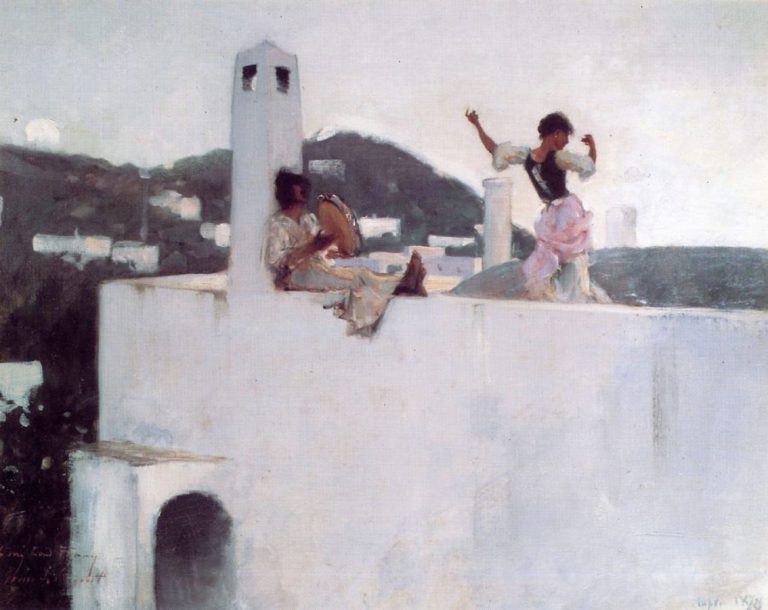 Summer is on the horizon and most of us, having been cooped up at home for some months now, are dreaming of the holidays. Long walks along beaches, toes in the sand, the sound of the waves crashing against the shore. Perhaps even a summer romance. This was the case in the 1870s when the American painter John Singer Sargent (1856–1925) visited the Italian island of Capri. Well-known for its electric blue seas, tall limestone cliffs and white beach side villas, Capri provided a breath-taking location for Sargent’s summer romance with Rosina Ferrara (1861–1934). The island was the backdrop for their love story, and Ferrara became Sargent’s muse. Let’s take a look at one of the most artistic summer romances told through the medium of painting.

A popular portraitist and landscape painter, John Singer Sargent was born in Florence to wealthy American parents. His parents left America after the death of one of his sisters. They moved to Florence for some escapism and time to mourn, though had every intention of returning home. Yet, falling in love with life abroad, they remained nomads for the rest of their lives. This had a lasting effect on the young artist who continued to travel between America and Europe for most of his life.

After being home schooled throughout his childhood, Sargent studied painting at the prestigious École des Beaux-Arts in Paris. He was extremely talented and was quickly noticed by French painter Carolus Duran who took him under his wing as a mentor.

By 1878, at the young age of 22, Sargent had already completed his studies with Carolus Duran. He had started achieving success at the Salon in Paris and seemed at the beginning of a promising career. In the summer of that year, he took a working holiday in Capri. Located just off the coast of Sorrento, in the southern part of the Gulf of Naples, Capri is a small, idyllic island. Typical of the Mediterranean, it is characterized by olive trees, vineyards and fishing harbors which nestle within small, rocky bays.

Staying in the small village of Anacapri, he surrounded himself with other artists who had sought solace in the island’s summer heat and natural beauty. Nowadays, Capri is a holiday destination for the rich and famous, well known for its upscale hotels and famous designer fashion outlets. Yet, in the late 1800s, it was relatively unknown, still unspoiled and frequented by artists, writers and musicians.

Sargent set out to Capri with the intention of capturing the beauty of this island, steeped in romance. Yet, for this, he needed a model. The community’s priests had warned the local girls of the dangers of modeling for the artists who frequently passed through. However, there was one girl who ignored their warnings. She was called Rosina Ferrara.

Rosina Ferrara and the Capri Romance

Born into a local working class family, Ferrara was 17 years old when Sargent came to Capri. His trip to the island arose from the need to develop his portraiture skills. For this purpose, Ferrara was the perfect model and she was happy to pose for him. Tall and slim, with dark olive skin and curly dark hair, he found her particularly exotic and intriguing. Of course Capri was an attractive backdrop in many ways. It had turquoise waters, a sweltering summer heat and a supposedly beautiful native population. This was in addition to the architectural remains left by its ancient Phoenician, Greek, and Roman inhabitants.

Rosina Ferrara had been discovered on the island by artists before Sargent. French painter Edward Vaux had met her first, followed by the English painter Frank Hyde. Sargent befriended Hyde during his time on the island and visited Hyde’s studio in an abandoned monastery, where he first met Ferrara. He was overcome by her wild beauty and she became his muse. Over the course of that summer, he painted around a dozen works featuring the mesmerizing native of Capri.

Of one the most captivating paintings of these was A Capriote. Sargent painted Ferrara in the middle of an olive grove with her arms wrapped around an olive tree, mimicking its twisted shape. This pose illustrates her connection with the wild and natural beauty of the island, something he found so irresistible about her.

Another famous painting by John Singer Sargent from his time in Capri is Rosina Ferrara: Head of a Capri Girl. This is thought to be one of the best of his ‘quick’ portraits from early on in his career. It is painted in oils on cardboard. He signed and dedicated it to Hyde while he was still on Capri. Presumably, he wanted to thank Hyde for introducing him to this girl.

Ferrara can be seen dancing for Sargent in a number of this group of paintings. In Capri Girl on a Rooftop, she dances to the beat of a local friend’s tambourine. This is thought to have been painted from the rooftop of his hotel. She dances for him again in Portrait of Rosina Ferrara where we see her in her local dress, with her hair tumbling down and smiling for the onlooker. Sargent captured her uninhibited, spontaneous movement and fierce spirit brilliantly.

A Short Lived Romance of Sargent and Ferrara on Capri

John Singer Sargent’s paintings perfectly depict Ferrara’s beauty, grace and poise. They lead us to believe that he had somewhat of an obsession with his muse but, although they had a love affair that summer, it was short-lived. Once summer had come to a close, Sargent packed his bags and left for Paris. His skills as an artist had greatly improved and an inevitable success and fame awaited him there. Capri was just the beginning of Sargent’s pursuit of the exotic. Later he sought out similar locations across Spain, Italy and France, and other muses.

Yet, what became of Rosina Ferrara, the local girl from Capri? Following her brief romance with Sargent in 1878, she continued to model for artists who came to the island. In 1883 she gave birth to her first child, a daughter, the father of whom is unknown. Then, in 1891 she married the American muralist George Randolph Barse, a respectable man of high social standing in America. He took Ferrara to live in Westchester County, just north of New York City where she lived out the rest of her days with him. She died of pneumonia in 1934 leaving behind a devastated Barse. He was so shaken by his loss that he committed suicide just 3 years later.

Sargent continued to present works of art to exhibitions across Europe and America throughout his life. He was very successful and made a great fortune from his unquestionable talent as an artist. He went on to co-found New York City’s Grand Central Art Galleries in 1922 but shortly after this, in 1925, he died of heart disease in London.

The Capri Romance of Sargent and Ferrara Saved in Paintings

Sargent’s beautiful and captivating paintings of Ferrara remain with us and through them, their brief summer romance lives on. Their time together on the rugged little island of Capri, has been cemented in history forever.