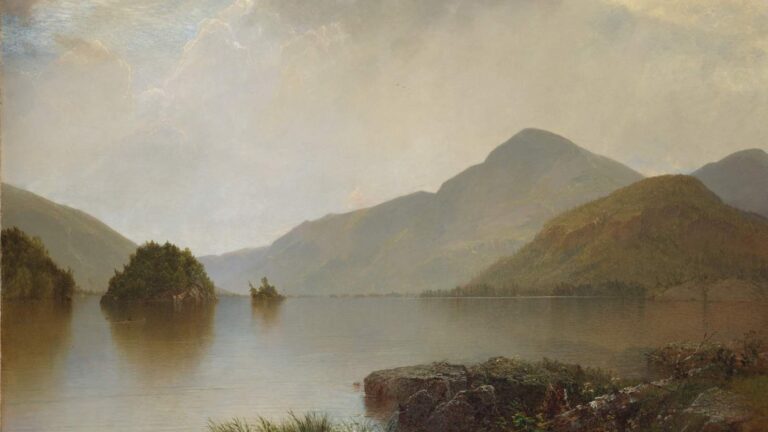 It's finally summer, and that means it's time to visit the beach! But if a trip to the lake or the ocean isn't on your schedule, let these beautiful Luminist seascapes bring the beach to you.

The Luminists were American landscape painters from the mid-19th century. They were part of the Hudson River School tradition but had a unique focus of their own. The Luminists painted simple and clear compositions of quiet landscape scenes. They excelled in depicting atmospheric effects, especially involving light, which is often the true star of their paintings. The Luminists were particularly fond of painting the water, and their style certainly suited it. Their most minimal paintings consist of little more than water, horizon, and atmosphere, with rarely a person, tree, or building in sight. Even the more detailed ones don't contain much to distract the viewer from the beauty of water and how light reflects off it. Luminist seascapes truly embody the ideal summer day on the water.

Lake George, a popular summer getaway in upstate New York, was a favorite subject for many Luminist painters. John Frederick Kensett (1816-1872) was just one of several artists who painted the lake over and over again. This is a very characteristic Luminist seascape, since it combines strong, clear shapes with a tangible sense of air and light. You could almost touch the gentle haze that fills the scene.

Francis Augustus Silva (1835-1886) lived and worked near New York City's harbors back when the city was very different from what it is today. This painting mixes pale blues, yellows, and pinks to create a phenomenal sky. It might remind you of British landscape painter J.M.W. Turner's many beautiful harbor paintings, which often have similar skies. Some Luminists were influenced by Turner, particularly those who spent time in Europe. However, Silva doesn't seem to have ever travelled abroad and experienced Turner's work in person.

This is really what Luminist seascapes are all about - a simple composition cut in half by the horizon, a limited color palette, and a few, clearly-defined waves. There's no narrative or message; however, the way the light hits the water in the center is all this painting needs to be spectacular. It's as though the interaction of water and light is itself the subject of the painting.

Sanford Robinson Gifford (1823-1880) was one of the most successful Luminist painters, and he was also a founder of the Metropolitan Museum of Art. His Manchester Beach shown above - one of only a few Luminist seascapes in museums outside the states - is a great example of the Luminists' reputation for clarity. Every line and shape is crisp and perfect without overwhelming the composition in too much detail.

The Luminists may have been American artists, but they didn't limit themselves to only painting American scenes. Many travelled throughout Europe and painted the many waterways they saw along the journey, from the British Isles to the Mediterranean. It's easy to imagine yourself in southern Italy when you view this very blue, very tranquil painting.

Martin Johnson Heade (1819-1904) is best known for his many botanical and zoological paintings - scenes of delicate hummingbirds hovering over colorful tropical flowers. However, he was also an accomplished Luminist landscape painter. His Dawn shows an idyllic beach with a lone sailboat in a warm sunrise. This quiet seashore must be the way local fishermen experience it before daylight brings the heat and the crowds.

Most Luminist seascapes are full of sunlight, but the opposite can be equally effective. A small patch of sunset reflecting off the water and disappearing into the dark-blue sky makes this scene by marine painter Fitz Hugh Lane (1804-1865) really captivating. This painting makes me think about the end of a long summer day on the coast. It shows calmness after the sun has set, the heat has eased, and all the day's fun has been enjoyed.

Enjoy a few more Luminist seascapes in our articles about Female Artists of the Hudson River School, part one and two.