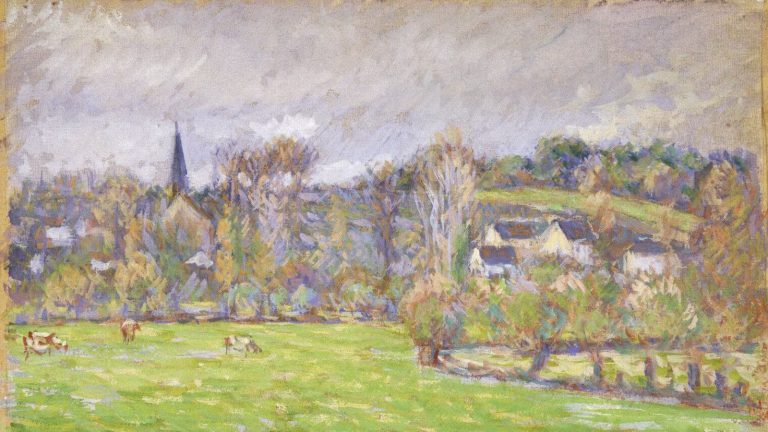 Many people resolve to spend more time outside, enjoying the physical and mental health benefits of being in nature. The Impressionists did the same thing to improve their art. In fact, the idea of painting en plein air – outside among the scenery – was one of their many innovations. Earlier landscape painters had also embraced the opportunity to breathe the fresh air, but primarily to sketch preparatory studies. By contrast, the Impressionists created entire paintings, start-to-finish, amongst the birds and trees. But just deciding to take some more walks would be a good resolution for the rest of us.

Keeping a journal can be a good idea for many reasons. Writing is creative and good for the mind. It can help us put our thoughts in order, process our experiences, and remember important ideas. Leonardo da Vinci was a prolific journal writer. Throughout his long life, he filled numerous notebooks with ideas, observations, discoveries, scientific inquiries, and more. Popular legend has it that Leonardo wrote in reversed “mirror writing” so that his rivals couldn’t access his notes. However, he most likely wrote this way because it was more natural for him as a left-handed person. Like him, you can keep your journal using whatever kind of penmanship works for you.

If you, like the rest of us, have spent lots of time at home this year, you’ve probably noticed a bunch of things you’d like to improve there. So, why not resolve to redecorate? As highly creative and visual people, many artists have spent much time and energy creating their perfect homes. American landscape painter Frederic Edwin Church is a great example. After returning from an extended voyage to the Holy Land, Church designed and decorated a gorgeous, Middle Eastern-inspired home called Olana in Hudson, New York. It’s a true work of art, inside and out. Like Church, you can resolve to bring more of your personal style, whatever it might be, into your living space in 2022.

The pandemic has probably made you spend either more time with your family (if you’re stuck in the house together) or less (if you can’t travel to visit). Either way, you might wish to better appreciate and get along with your family in the new year. If so, why not look at some famous artistic families for inspiration?

Being an artist can sometimes run in the family, especially when an artist parent teaches his or her children at a young age. Up until recently, training from a family member was the main way that female artists, such as Artemisia Gentileschi and Sofonisba Anguissola, learned their craft. There have also been some pretty well-known artistic dynasties. American painter Charles Willson Peale named his numerous children after old masters and trained them to be artists. Several were quite successful. Meanwhile, notable artistic family team-ups have included celebrated medieval manuscript illuminators the Limbourgs (three brothers) and Baroque painters the Carracci (two brothers and a cousin).

As far as New Year’s resolutions go, learning a new craft is a pretty great one. Creating things with one’s own hands can be very relaxing, and looking at the (hopefully) attractive object you’ve made will give you a sense of satisfaction and pride.

British artist William Morris certainly believed in the value of crafting things by hand. In the 19th century, he spearheaded the Arts & Crafts movement to nurture craft skills in decline due to mass production. Members of his Morris & Co. workshops worked in glass, metal, wood, paper, and textiles to design and hand construct one-of-a-kind objects. Similar workshops also sprang up throughout England and America. Clearly, there must be something to this whole crafting thing!

If you’re reading DailyArt Magazine, I probably don’t have to explain to you how resolving to spend more time enjoying artwork will improve your life. However, this resolution means something a bit different than it would have this time last year. Instead of visiting museums in person, you might have to tour them online or in books instead. (You can also enjoy one artwork a day on your phone with the DailyArt app!)

Whatever form your New Year’s resolution takes, you’ll be in good company. Studying other people’s artwork has been essential to an artist’s training since basically forever. When museums are open, it’s common to find artists stationed in the galleries with sketchpads or easels, copying the masters. In times gone by, when travel was difficult and photography not yet invented, artists would often learn from the greats via published prints of their masterpieces.

Reading books is fun and enriching; it introduces you to new ideas and even new worlds. And there are enough books out there in the world to suit every possible taste. I can’t think of a more enjoyable New Year’s resolution.

On the artistic front, literature has long supplied subjects for artists. Works involving classical mythology have consistently been popular across the centuries. However, the Pre-Raphaelites (and some other 19th-century painters) probably win the prize for most frequent use of literary subjects in their art. Shakespeare, Dante, and Tennyson are just some of the authors whose stories these artists transformed into vivid, colorful, and highly-detailed paintings. If you don’t know which book to pick up first, you could always let these beautiful artworks guide you.

Why not start off the new year with a new furry/scaly/feathery friend? Just like lots of other humans, many noted artists have felt strongly connected to animals. 18th-century portrait painter Thomas Gainsborough painted dogs frequently, reportedly preferring them to people. French artist Rosa Bonheur, meanwhile, chose to specialize in animal paintings. She visited horse markets and slaughterhouses in order to perfect her understanding of animal anatomy and movement. On a quirkier note, Pre-Raphaelite Dante Gabriel Rossetti briefly kept a pet wombat. Check out these adorable dogs and cats in art if you still need some more convincing.

Minimalism as a lifestyle idea is currently really trendy. It involves getting rid of excess, unnecessary stuff in order to live simply and without clutter. It has also been a key principle in many forms of eastern and western art. Around the mid-20th century, so-called Minimalists like Sol LeWitt, Donald Judd, and Dan Flavin moved away from texture, meaning and complexity to embrace clean lines, sparseness, and industrial materials. 20th-century decorative arts also experienced a similar trend towards elegant, functional objects. Of course, many eastern cultures have valued such simplicity since long before the western world caught on. The spare, calm, transcendent beauty that characterizes many Asian artworks would inspire anyone to live more minimally.

You don’t have to be a great artist – or even an artist at all – to express yourself more creatively in the new year. Whether you enjoy painting, writing, cooking, sewing, singing, dancing, jewelry-making, flower arranging, scrapbooking, or something else, there are so many ways to bring a little creative joy into your life. Why not let your favorite artists inspire you to give it a try? Happy New Year!

If one of your New Year’s resolutions is to learn more about art – check out our online courses!