Around the World With a Painter: Frederic Edwin Church’s Travels 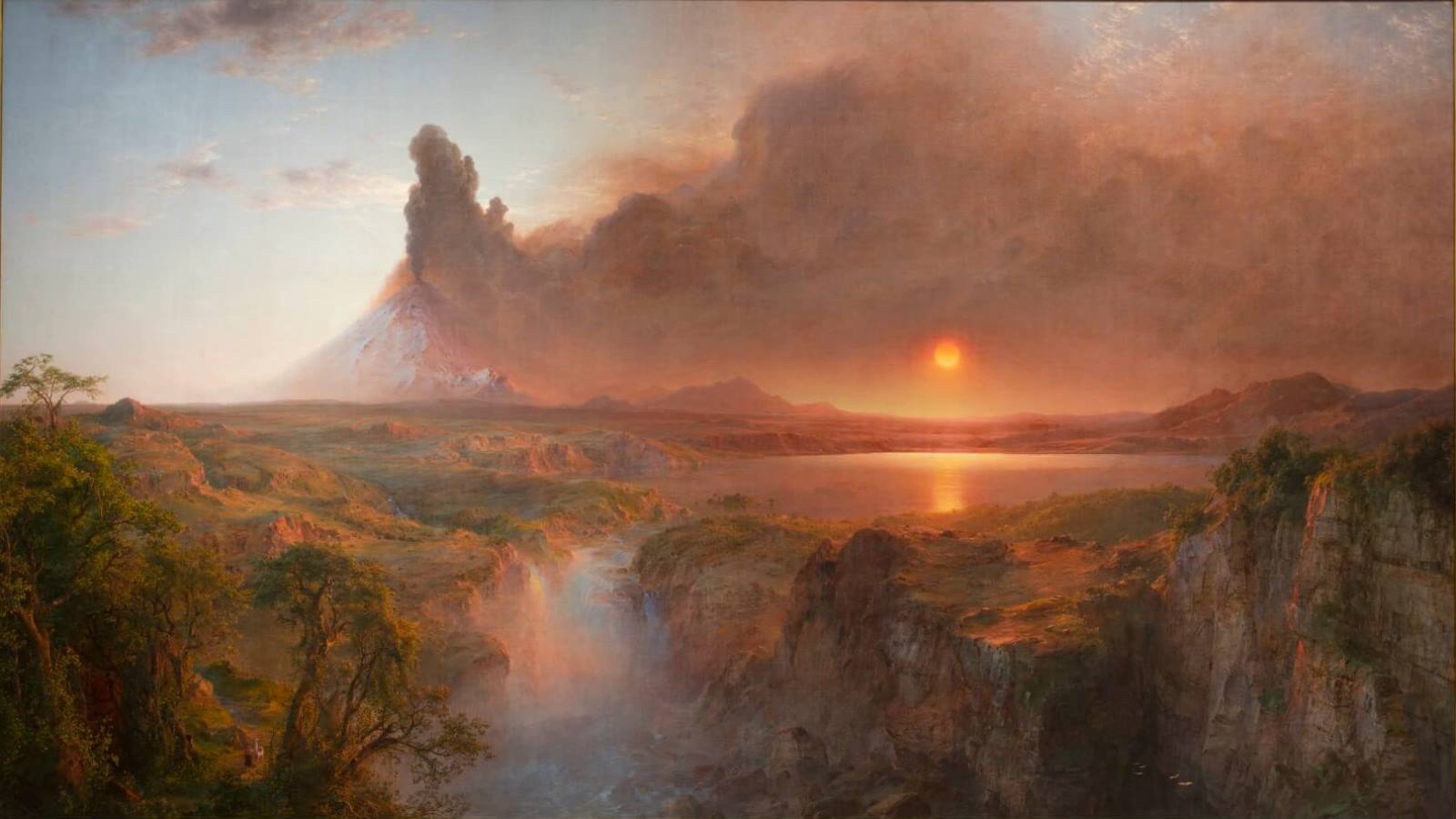 Hudson River School painter Frederic Edwin Church (1826-1900) was a true world traveler. In his lifetime, Church visited the Arctic, Mexico, South America, the Caribbean, Europe, and the Middle East. He painted gorgeous landscape scenes based on each location. Let’s journey around the world as we follow Frederic Edwin Church’s travels.

Our first destination is Niagara Falls, on the border between New York, United States and Ontario, Canada. It has been a popular tourist attraction since the 19th century. The National Gallery of Art’s Niagara Falls is the most famous of Church’s Niagara paintings. It depicts the falls in a massive panorama. With its curtains of blue-green water and white spray, the painting is dynamic and awe-inspiring. It’s also a bit frightening, because it seems as though the viewer stands close to the edge of the falls. The result is compelling and exciting.

Now, we move north to the frigid-but-beautiful Arctic. Frederic Church lived in the time of great polar exploration, when adventurers from across the world raced each other to reach the North and South Poles. Understandably, this exciting and highly-dangerous endeavor captured the popular imagination. Church visited the Arctic for several weeks in 1859 and later painted The Icebergs based on sketches he made there.

This scene is a perfect example of the sublime, a feeling of awe at the power of nature that was prized by the Romantic movement. The white icebergs feel massive and eternal against the dim sky, while greenish light adds a slightly eerie touch. A broken ship’s mast, added by Church at a later date, appears in the foreground. This detail likely refers to the doomed Franklin Expedition of the 1840s, as well as the many other explorers who died in search of the Northwest Passage.

Church’s Arctic voyage also inspired Aurora Borealis, which depicts the natural phenomenon better known as the Northern Lights. I love how the colorful lights seem to take on animal or human forms, as though some cosmic battle is taking place across the sky.

It’s time to get out of the cold and head down south. Frederic Edwin Church’s travels included two trips to South America, in 1853 and 1857. His South American voyages were particularly significant to him. Church was a big fan of important Prussian naturalist Alexander von Humboldt (1769-1859). He basically devoured Humboldt’s many published writings, and Humboldt’s teachings strongly influenced Church’s paintings. Humboldt spent several years in South America, where he studied the continent’s natural history. Church closely retraced Humboldt’s steps during his own time there.

Church’s Heart of the Andes, his most ambitious landscape painting, was a tribute to Humboldt. It can also be thought of as a visual synopsis of Humboldt’s work. Unfortunately, Humboldt died just before he would have gotten to see it. (Learn more about Alexander von Humboldt and American art via the Smithsonian.)

In Heart of the Andes, Church obviously heeded Humboldt’s call to pay close attention to nature. The painting depicts over a hundred identifiable species of plants. However, it does not represent any single view of the Andes mountains. Instead, it includes five different Ecuadorian climates. For example, the white peak of Mount Chimborazo is in the upper left, and the Amazon basin with a waterfall is near the center. Additionally, Church based the overall composition on Humboldt’s Plant Geography Map, which Humboldt created to show the distribution of plant life across the height of different mountains.

Whenever your real-life travels take you to New York, I strongly encourage you to visit Heart of the Andes at the Met, because many of its little details aren’t visible in photographs. In fact, its first New York exhibition provided visitors with opera glasses to help them view all these nuances.

Frederic Edwin Church’s Jamaica paintings are beautiful but tinged with sadness. That’s because Church and his wife Isabel spent several months in Jamaica in 1865 after losing both of their young children to diphtheria. Despite his grief, Church’s Jamaican period was highly productive. He traveled all around the island and sketched the flora and atmospheric effects. Later on, he used these sketches to create large-scale paintings like Vale of St. Thomas, Jamaica. That painting has clear parallels with Heart of the Andes, but it also exudes a poignant spirituality not present in that more famous work. This tone perhaps reflects Church’s devout Christian faith in the face of his great losses.

Frederic and Isabel Church traveled to Europe for an extended visit in 1867. In the 19th century, most American artists went to Europe to study the Old Masters as soon as possible. Therefore, it’s noteworthy that Church waited so long to make this pilgrimage. Church’s European paintings are not his most famous or numerous, though they can be quite enjoyable. As with his New World paintings, Church made many sketches at various European sites and used them later as reference works for large-scale oil paintings. Here are two of his beautiful European sketches. The Parthenon sketch inspired his later painting The Parthenon, now at the Met, while Königssee, Bavaria relates to another oil sketch at Olana.

Leaving Europe, Frederic Edwin Church’s travels continued on to the Holy Land. It’s clear that Church found much to inspire him in the Middle East, since his self-designed home, Olana, includes many Islamic motifs. Clearly, the deeply-religious Church connected strongly with the Holy Land. I find his Middle Eastern paintings to be among his most intriguing.

El Khasne, or “The Treasury” is part of Petra, the ancient Nabatean city in what is now Jordan. This building, which was more likely a tomb than a treasury, is now famous for its appearance in Indiana Jones and the Last Crusade. The dramatic composition of El Khasne, Petra makes it quite striking. A sliver of The Treasury’s luminous, classical facade peeks out through a narrow opening in the shadowy rock face. It’s a mysterious view of a mysterious building, but it’s no artistic contrivance. Even today, this is actually a visitor’s first view as they enter the archaeological site in Petra.

El Khasne, Petra is perhaps an uncharacteristic painting for Frederic Edwin Church, but it is one of my favorites. It’s also a good one to end our trip with, because it points back home. This painting hangs over the fireplace at Olana, Church’s house-turned-museum in Hudson, New York.

Traveling around the world is nice, but so is returning home afterwards. For Frederic Edwin Church, home was Olana in Hudson, New York. Church designed the house and grounds at Olana himself, and he pulled inspiration from all of his travels. Many people consider Olana to be his greatest landscape composition ever. It’s a real-life version of the work he usually did with his paintbrush. It must have been a delightful place to return home to, although it wasn’t built until after Church’s last major voyage. Now a museum, Olana is certainly a delightful place to visit today.

If you find any joy and inspiration in our stories, PLEASE SUPPORT
DailyArt Magazine with modest donation. We love art history and we want to keep going with writing about it.
$5 $10 $25 $50 $100 MONTHLY
Related Topics:19th-century, American, American art, American artists, featured, Hudson River School, landscape painting, landscapes