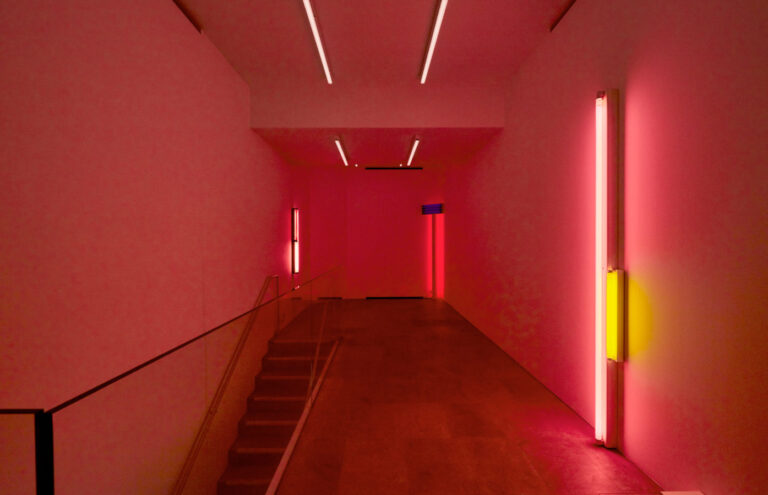 Dan Flavin (1993-1996) was an American artist and pioneer of Minimalism. He is famous for making sculptural objects and installations from fluorescent lights.

“I like art as thought better than art as work… It’s important to me that I don’t get my hands dirty. Not because I’m instinctively lazy. It’s a declaration: art is thought.”

Initially, Flavin’s works were drawings and paintings. These show the influence of Abstract Expressionism. This is a term used for art from 1940s and 1950s America that is all about spontaneity, for example, art by Jackson Pollock and Mark Rothko. Flavin was influenced by the idea of found objects in art, and he particularly liked using crushed cans.

It was in 1961 that Flavin moved towards the idea of electric lights. He first made the icons, which put the lights onto single-colour boxes, which were made from various materials such as wood, Formica, or Masonite. By 1963 however, the canvas was cone, and Flavin began to work with his signature fluorescent tubes.

Diagonal of Personal Ecstasy (the Diagonal of May 25, 1963), a yellow fluorescent placed on a wall at a 45-degree angle from the floor and completed in 1963, was Flavin’s first mature work; it is dedicated to Constantin Brâncuși, a well-known french sculptor and painter. These pieces grew and grew, eventually filling entire rooms!

Features of a Flavin

The fluorescent tubes that Flavin used would always be straight and either 2, 4, 6, or eight feet long. His work is a consideration of electric light: its atmospheric and colorful properties.

If a buyer, who had the correct certificate and diagram for a work, approached Flavin with a broken fixture – Flavin would replace it. This is the beauty of using commercially available lights! By this method, Flavin subverts the mundane, in terms of both material and form. Thus, he creates a huge variety of works and experiences for viewers.

The colours of the piece are limited to red, blue, green, pink, yellow, ultraviolet, and white. Although, technically, he uses four different colours of white.

The sculptures explore ideas of colour, light and space by virtue of these strict forms. Through this simplicity, Flavin’s work set the stage for much of the experience-oriented, immersive installations that are an integral part of the contemporary art scene today.

3. Untitled (but dedicated to)

Flavin’s work is almost always untitled but dedicated to someone, inevitably evoking a personal or referential element to his work. Flavin often dedicated his works to friends, family and inspirations; his first dedication was to his twin brother, David John Flavin, shortly after his death in 1962.

The Nominal Three (to William of Ockham), dedicated to the 14th-century English philosopher, exemplifies Flavin’s use of the fluorescent tube as a basic building block for pieces much more expansive.

In the 1970s and 80s, Flavin began to create more complex installations of fluorescent tubes, notably his “barred corridors” and corner installations.

Flavin’s practice has “an acute awareness of the phenomenology of rooms.”

The corridors control the movement of the viewer and were configured in lots of different ways. The works use a vocabulary of “corners,” “barriers,” and “corridors” to re-conceptualize the sculpture in relation to space.

Flavin’s first corridor, Untitled (to Jan and Ron Greenberg) was made for a 1973 solo exhibition and is dedicated to a local gallerist and his wife. It is yellow and green with a small gap that allows a glow of colour to seep through. These spacings and gaps became a regular feature of the corridors and allowed Flavin to play with mixing light for the viewer.

Flavin’s work increasingly concentrates on the relationship between sculptures and the spaces they use. In the 1990s art institutions across Europe and America began to offer larger galleries to Flavin allowing the scale of his work to become more grandiose.

Flavin died in 1996 from complications related to diabetes. However, two days before his death, he completed his final artwork. It was a site-specific piece in the church Santa Maria Annunciata (Chiesa Rossa, Milan, Italy), which you can still visit today.

For Prudence at BASTIAN gallery

There is currently an opportunity to see a free exhibition of Flavin’s work, which features on this third key aspect: the dedications. Fittingly, the exhibition is at the intimate BASTIAN gallery in London Mayfair. For Prudence (22 November 2019 – 15 February 2020) focuses on the personal nature of Flavin’s work. You can read more about the history of the gallery here.

The title of BASTIAN’s exhibition For Prudence is from one of the pieces on display, Untitled (for Prudence and her new baby), for Prudence Fairweather, who was Flavin’s studio manager form 1990 until his death. This piece at BASTIAN is in the company of a work from 1964, made in the first stages of Flavin’s use of standardised electrical components. Consequently it is a good opportunity to compare early and later work, observing how each preserving the essence of not only the artist, but also his family and his friends in their glow.