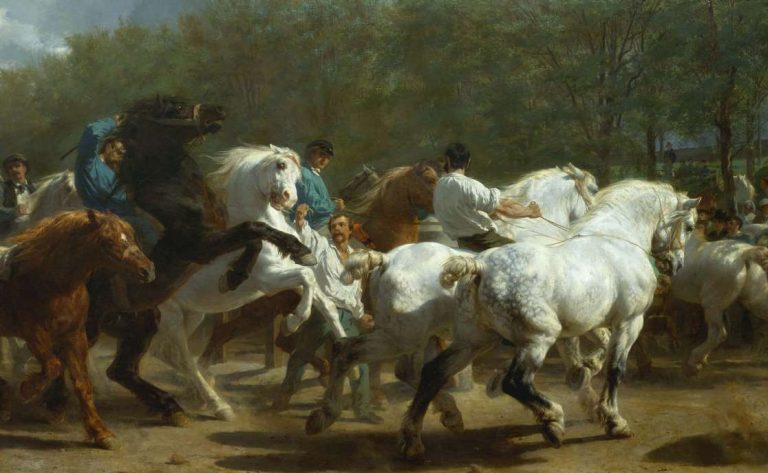 Today’s Masterpiece Story is that of The Horse Fair by French Realist painter Rosa Bonheur (1822-1899). The Horse Fair was the undisputed star of the Salon of 1853. Bonheur was already an admired animal painter when she submitted this monumental canvas to France’s major annual art show. In fact, she was ineligible to win a gold medal for this painting because she had already claimed that once-in-a-lifetime prize for earlier work. However, the critical acclaim this masterpiece garnered, even from critics who panned the rest of the offerings, took her fame to a whole new level.

The photograph doesn’t properly convey how massive this painting is! Over 8 feet high and 16.5 feet long, or about 2.5 x 5 meters, it takes up an entire gallery wall at the Metropolitan Museum of Art. It’s an extremely impressive painting, especially in person. The Horse Fair depicts a Parisian horse market that Bonheur visited twice every week for about a year and a half.

The fair appears as a whirling storm of activity, viewed from just far enough away to avoid getting trampled. There’s a strong sense of dynamic movement from both the horses and their handlers. The horses are life-sized, so their powerful musculature and barely-contained energy give the painting a compelling hint of danger. Bonheur had a keen understanding of animal anatomy, likely the result of her visits to slaughterhouses.

Clearly, Rosa Bonheur was a pretty epic lady. Not only was she a hugely successful female artist who was respected throughout Europe and America – by itself a great accomplishment in the 19th century – but she was also gutsy, confident, and skillful enough to pull off massive compositions like this one. Her love of both animals and drawing developed at a very young age. Thanks to her father, an artist and early believer in gender equality, she began her painting career at the age of 13 as his assistant.

By the age of 20, she had achieved the critical and commercial success that only grew further throughout her prolific career. After The Horse Fair, which is her biggest and best-known painting, her next most famous work is Plowing in the Nivernais, which remains in her native country. The scene is calmer and more bucolic than The Horse Fair, but no less powerful. In also received great acclaim at the Paris Salon. In addition to her paintings, she also made and exhibited bronze animal sculptures.

Rosa Bonheur reminds me of another female artist who also loved animals, made paintings and sculptures of them, and observed them at the Parisian animal markets. Her name was Matilda Browne, and you can read about her here.