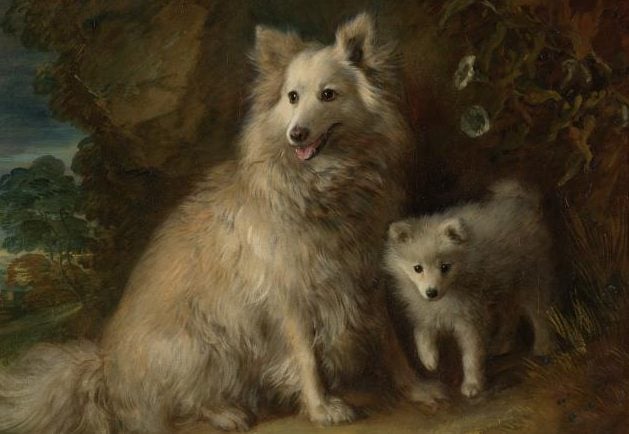 Puppies, Doggies and Pugs in Art (For Dog Lovers Only!)

Thomas Gainsborough (1727-1788) was a portrait and landscape painter. During his career, he often painted dogs accompanying his sitters. He always made sure that the dog was not merely a prop, but also ooze personality. Pity that Gainsborough only painted a handful of actual dogs’ portraits…

It is known that if given a choice, Gainsborough would gladly have stopped painting portraits and focused solely on landscapes:

I’m sick of Portraits and wish very much to take my Viol da Gamba and walk off to some sweet Village, where I can paint Landskips and enjoy the fag End of life in quietness and ease.

His love of nature clearly shows in his dog portraits.

Bumper looks quite different than the bull terriers we know today, like many other breeds, it has changed over the centuries. It is one of the earliest paintings by Gainsborough. Clearly Bumper must have made an impression, as Gainsborough wrote on the back of the canvas “most remarkable sagacious cur”. Here we see Bumper looking attentively in the distance. Someone must be approaching. Also, looking at the position of Bumper’s hind legs he is getting ready to jump, but it isn’t obvious whether with joy or anger.

This is clearly a smart and strong-willed dog. It has things to do and places to be and only stopped for a second to pose for the portrait. It’s a Pomeranian, a breed of dogs of the Spitz type. They are friendly and full of energy but also very alert to their surroundings, often barking at any new sound. They are also very good at getting what they want from their owners, and it clearly shows.

A completely different take on Pomeranians. A small puppy walks in the direction of the viewer, very curious and almost ready to step off the canvas. Meanwhile, his mother looks at something off to the side, always alert to protect her little one. Gainsborough fills this portrait with emotions and sets the dogs in a landscape expertly painted with fast and dramatic brushstrokes. The difference in handling the texture of the dogs’ fur and the trees in the background is fascinating.

Another pair of dogs, those two beauties are believed to be Gainsborough’s own dogs. He must have known them very well, as he clearly shows their different personalities. Fox, on the left, is very alert and full of energy, clearly ready to jump or start barking at any second, just waiting for a good excuse to do so. Tristram, on the other hand, is lazily dozing off, he will not be moved easily. Or possibly he relies on Fox to keep watch. Either way, they seem to form a happy couple of friends, their temperaments complimenting each other.

This is yet another example of how breeds have changed throughout the centuries; this pug is very different from today’s version. His legs are longer and his face is less wrinkly. Pugs were brought to Europe from China and in the 16th century became the official dog of the House of Orange, after one of them alerted the Prince of Orange of approaching assassins. The dog in the portrait has a very intelligent look. He seems to understand that he should stay still, even though it is clear that he would rather go and play with his owner.

This pug, on the other hand, is very dignified, lying like a Sphinx and owning the landscape around him. He is exactly where he wants to be. Gainsborough put as much effort in capturing the personalities of his canine sitters as in his human ones (even though he was sick of portraits).