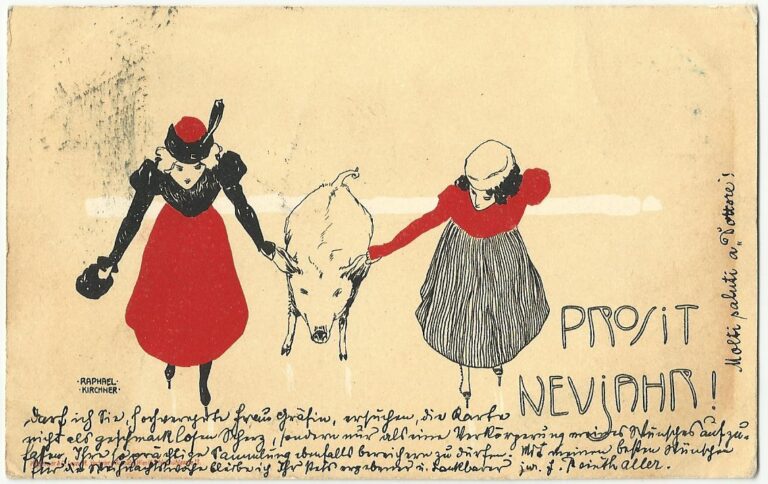 Back in the day people used to send not only Christmas cards but also greetings for New Year. Today we want to follow this old tradition and send you a couple of classy Art Nouveau cards designed by an Austrian illustrator and painter, Raphael Kirchner.

Kirchner was born in Vienna in 1876 and graduated from the Viennese Academy of Fine Arts. He was a portrait painter, an illustrator but he gained most recognition as a postcard designer. In 1900 he moved to Paris where he spent 14 years. At the outbreak of the Great War he moved to the United States where he lived until his death in 1917.

If you’re wondering why this sledge is pulled by pigs: in Germanic cultures pigs symbolized prosperity, wealth and good fortune. In Germany people used to give each other marzipan pigs as gifts on New Year’s Eve.

Two years ago, in 2019, we celebrated the Year of the Pig according to the Chinese New Year!

No matter what animal, zodiac sign, or number accompanies this new year, we hope that it’s going to be a year full of art and inspiration. Explore and create, all the best!