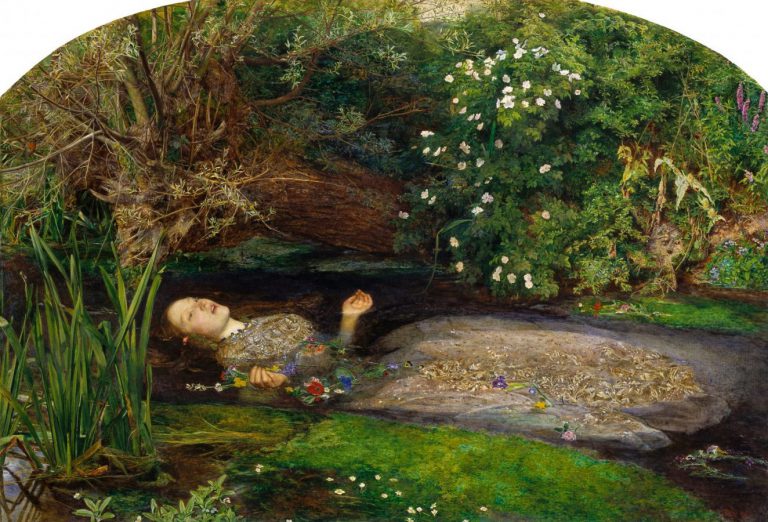 From its very inception, subjects taken from literature were a staple for the Pre-Raphaelite Brotherhood. Shakespeare, Keates, and Tennyson were among the many who had their mind’s work immortalized in paintings.

The Pre-Raphaelite Brotherhood was formed in 1848. As the name suggests, they rejected the Academy’s fascination with the work ofRaphael. Instead, they looked in early Renaissance and late medieval work before the time of the Italian master. That is to say, they turned to the past to find the art of the future.

The grisly love story of Isabella and Lorenzo came from a poem by John Keats, after a story in Boccaccio’s Decameron. According to the poem, Isabella falls in love with Lorenzo, an employee of her father’s. During the meal we see on the canvas, her brothers realize their secret relationship and later murder Lorenzo. On the painting, the young man looks intensely at his lover while offering her an orange. This was a delicacy of the time, since oranges were rare. Across the table, the brothers notice the tender gesture and thus the couple are found out.

Holman Hunt depicted a later part in the story. After Lorenzo was murdered, Isabella finds his body and cuts off the head. She later plants it in a pot of basil. Her brothers soon realize her actions due to the time she spends with the plant. They steal the pot and flee Florence. As a result, Isabella dies of sadness. Hunt’s Isabella is quite different from Millais’. She is a sturdy Mediterranean beauty. The painter said he wanted her to look as if she was able to cut off a head. The young woman embraces the pot, which is decorated with skulls to suggest its macabre contents.

In the usual Pre-Raphaelite fashion, in both paintings, everything is handled in minute detail. The bright colors and the stiffness of the figures in the Millais painting comes from early Renaissance painting.

Millais’ Ophelia is probably the most popular work by the Pre-Raphaelite Brotherhood. The painting illustrates an event in Shakespeare’s Hamlet. Ophelia goes mad from grief when she learns that Hamlet, her lover, has murdered her father. The scene on the painting does not take place on stage. Instead, the audience learns about her death through a conversation between queen Gertrude and Ophelia’s brother, Laertes. The queen describes how the young woman fell into the river, while picking flowers, and drowned.

Millais was adamant about the realistic representation of the subject. He spent the summer of 1851 in Surrey painting the landscape from nature. His love for detail resulted in the lush nature on the canvas. The model for Ophelia was Elizabeth Siddall, later Rossetti’s wife and a Pre-Raphaelite sister. For realism’s sake, Siddall posed in a bathtub full of water, with lamps underneath to keep the water warm. However, at some point the lamps went out and Millais was so absorbed in his panting, he did not notice. Eventually, Siddall caught pneumonia and her father held the painter responsible for medical expenses.

At the turn of the century, John William Waterhouse, the best-known inheritor of the Pre-Raphaelite style, painted his own version of Ophelia. In his painting, the mad princess is depicted moments before her death, still picking flowers. Waterhouse’s style is more painterly than the first generation of painters. Nonetheless, his affinity for their style and literature based subject matter is still there.

Throughout his life, Dante Gabriel Rossetti identified himself with the medieval Italian poet Dante Alighieri. When he married Siddall, she took the role of Beatrice, Alighieri’s beloved in Vita Nuova. In 1862, Siddall died when she overdosed on laudanum. Her grief-stricken husband honored her memory with this painting.

Siddall poses as Beatrice in a dream-like space. Her eyes are closed. She looks like she is praying. Around her float myriads of symbols. Just above her hands, a bird leaves a white poppy flower, the plant from which laudanum is made, suggesting Siddall’s cause of death. A sundial casting a shadow on the number nine marks the time of death of Beatrice. She died on the 9th of June 1290.

In the background, we see on the left Dante Alighieri and on the right the allegorical representation of Love, in the form of angel. Love holds the flickering soul of Beatrice/Elizabeth Siddall.

Measure for Measure tells the story of Claudio, a young man who has been sentenced to death by the temporary ruler of Vienna, Lord Angelo, for impregnating his fiancée. Isabela, Claudio’s sister and a nun, pleads for his life to Angelo and he offers her a deal. Claudio will be saved if she agrees to have sex with him. However, Isabela vehemently rejects the proposal. She then goes to see her brother in prison and prepare him for his fate. But Claudio urges her to change her mind. This is the moment we see on the canvas.

Holman Hun inscribed on the frame the following lines from the play.

“Claudio: Death is a fearful thing.
Isabela: And shamed life a hateful.”

The siblings are in stark contrast. Claudio crouches partly in shadow averting his gaze from his sister. He wears colorful and expensive clothing. On the other hand, Isabela sits upright wearing a simple white nun’s habit. She is fully in the light, symbolizing her purity. The lute behind her is a symbol of lust, reminding us the cause of Claudio’s predicament.

Millais painted another character from the same play, Mariana. She was the ex-fiancé of Angelo. Angelo left her when her dowry was lost at sea. Ever since, she lives isolated, still longing for him. However, the inspiration for the painting came from Mariana a poem by Lord Alfred Tennyson. These lines accompanied the painting when it was exhibited in the Royal Academy in 1851:

On the canvas, Mariana stretches her back after a long session of embroidery. Her pose suggests her depressed state. In front of her is a stained-glass window with a scene of the Annunciation, copied from the Chapel of Merton College in Oxford. On the right widow the motto ‘In coelo quies‘, ‘In heaven there is rest’ in Latin, refers to Mariana’s wish to die. This is a bleak scene, with nothing to suggest the eventual happy end Mariana gets in Shakespeare’s play.

Tennyson’s Arthurian poem of the cursed Lady of Shalott fascinated the Victorians. The poem tells of an isolated lady with a mysterious curse. She must never look out the window. Instead, she sees the outside world through a mirror and weaves those scenes on her loom. However, one day she looks out the window instead of the mirror when she sees Sir Lancelot riding by. Consequently, that activates the curse and throws her in an emotional state as illustrated in the poem:

“(…) She left the web, she left the loom,
She made three paces thro’ the room,
She saw the water-lily bloom,
She saw the helmet and the plume,
She look’d down to Camelot.
Out flew the web and floated wide;
The mirror crack’d from side to side;
“The curse is come upon me,” cried
The Lady of Shalott.”

Holman Hunt depicts the most active moment in the narrative. The lady’s hair flows in a torrent around her as she paces around the room. Strings from the loom have been wrapped around her and she flays her hand to free herself. Behind her, there is the cracked mirror, where we can see Sir Lancelot. On the left, there is a tapestry of Hercules stealing the golden fruit in the Garden of Hesperides.

Waterhouse painted a later stage of the poem:

“(…) And down the river’s dim expanse
Like some bold seer in a trance,
Seeing all his own mischance –
With glassy countenance
Did she look to Camelot.
And at the closing of the day
She loosed the chain, and down she lay;
The broad stream bore her far away,
The Lady of Shalott.”

The lady knows she going to die from the curse, due to her sexual desire for Lancelot. As a result, she leaves the tower and takes a boat down to Camelot. Unfortunately, by the time she arrives she is already dead.

Waterhouse keeps the aesthetics of the Pre-Raphaelite’s, but moves on technically to experiment with impressionism as seen in the handling of nature.

Sidonia von Bork is the central character in Wilhelm Meinhold’s gothic novel Sidonia the Sorceress. The book was published in 1847 and tells the story of the beautiful but evil Sidonia. She was the quintessential femme fatale, something that aligned with the Pre-Raphaelite’s interests with seductive but dangerous femininity. The model for the witch was Fanny Cornforth, Rossetti’s mistress and model at the time.

On the painting, Sidonia is pure evil. She looks at us with a sidelong glance while tugging at her necklace. The black and white pattern on her dress that Algernon Swinburne described as ‘’branching and knotted snakes’’ suggests her malicious nature.

Summer is finally here, and if you are looking for some summer reading to accompany you while you laze by the pool of your villa or soak up the sun...