Halloween in Hell: Dante and Virgil 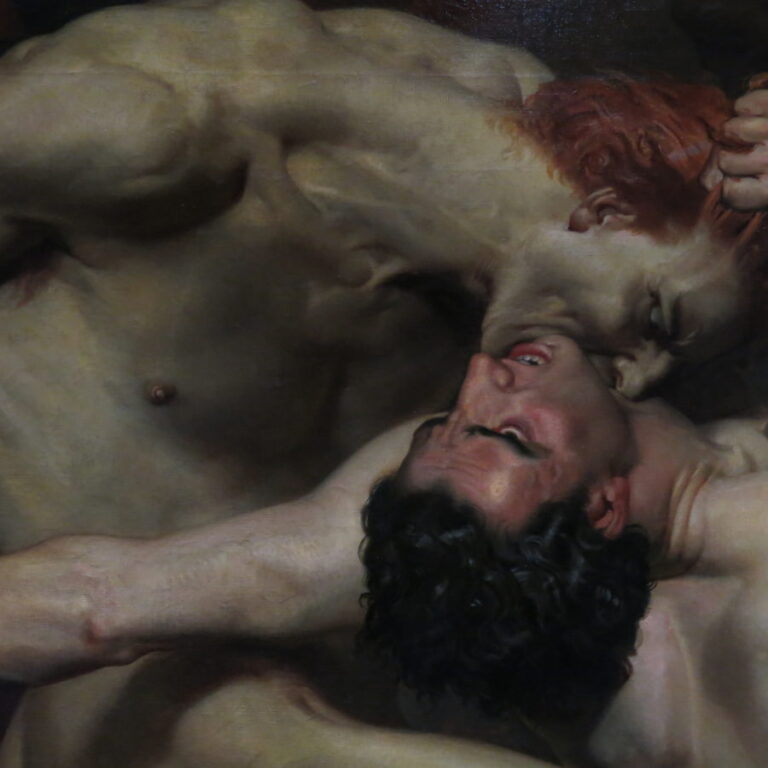 Masterpiece Story: Aeneas Taken by the Sibyl to the Underworld by Jacob van Swanenburgh

Halloween night is this time of year when we go from light to darkness, where we can see and experience demons. For this special occasion, I want to treat you to a work that brings all of the dark aspects of Halloween together. There is a room in the Musée d’Orsay in Paris that I find particularly inspiring. It hosts a mysterious canvas which deals with hell, demons, and passions. It is called Dante and Virgil in Hell and it was painted in 1850 by the artist William Bouguereau.

We are at the height of Romanticism, it’s the second half of the 19th century, the Gothic meets the flamboyant, the Baroque and the Rococo. It’s the time when Romanticism takes its aesthetic to a whole new level, a style known as Dark Romanticism. Many artists marked this period with their extraordinary works, such as William Blake and his illustrations and poems, Goethe and his Faust, John Milton and Paradise Lost, Mary Shelley and her Frankenstein, Polidori and his Vampyre…

But the work I am presenting to you today draws its inspiration from a much older story. It is with Dante Alighieri and the poet Virgil that we will explore the hell of the 14th century as presented in the Divine Comedy, which shows a journey between Purgatory, Hell, and Heaven.

In his book, which has inspired many for 700 years, the poet Dante recounts his spiritual confusion. Lost between vices and virtue, he descends to the depths of the earth and explores the darkness of human nature on an initiatory journey to places where the souls of all the deceased are gathered, from the illustrious to the forgotten, thus reminding us of our equality in the face of God.

In the scene offered here, we are in the eighth circle of Hell, which gathers falsifiers and counterfeiters. Capocchio, a heretic and alchemist, is bitten on the neck by Gianni Schicchi, who had usurped the identity of a man already dead in order to gain his heritage.

What violence that this piece, almost three meters high, imposes on its viewers! I am motionless in my corner and I observe the captivated audience. My whole being is seized by the feelings of rejection and passion.

When part of the audience is taking a step back, the rest is still and silent, listening to the concert of eternal fires which explode around our protagonists. Everything becomes one horrifying noise: the sound of muscles tearing, of pelvis bones breaking, of a hand opening a chest. This painting is deafening and it immortalizes the fatal fate of a man caught between human being and  beast.

Gothic vampirism, primary cannibalism, and bestial eroticism: these two bodies are bound by flesh and sin in Dante’s Hell, destined to re-live again and again their act of damnation.

William Bouguereau has created a work that defines the vocabulary characterizing the period of Dark Romanticism. In a delightful confusion, in this fierce union of bodies, he puts everyone on the same level.

Apart from the history told by Dante, this work is, in my opinion, an ode to the world of the uncanny, its mystery and its history. The uncanny has the power to affect our logical judgment, making it almost impossible for us to make a Manichean appreciation of a subject. We get lost between love and fear, feminine and masculine, shadows and lights, and, of course, between good and evil.

This same uncanny that is transmitted by a pen, a chisel, a brush, or a red-hot iron here is used to provoke a “vertigo of the senses”, reminding us that we are creatures not definable by binaries.

I often start my articles with a question but this time I turn to you readers. What do you see in this work? Will you look away or will you let yourself be absorbed as I was?

Rainer Maria Rilke wrote a sentence in the Letters to a Young Poet that has never been more accurate:

Basically, the only courage we are asked to have is to face the strange, the wonderful, the unexplainable that we encounter