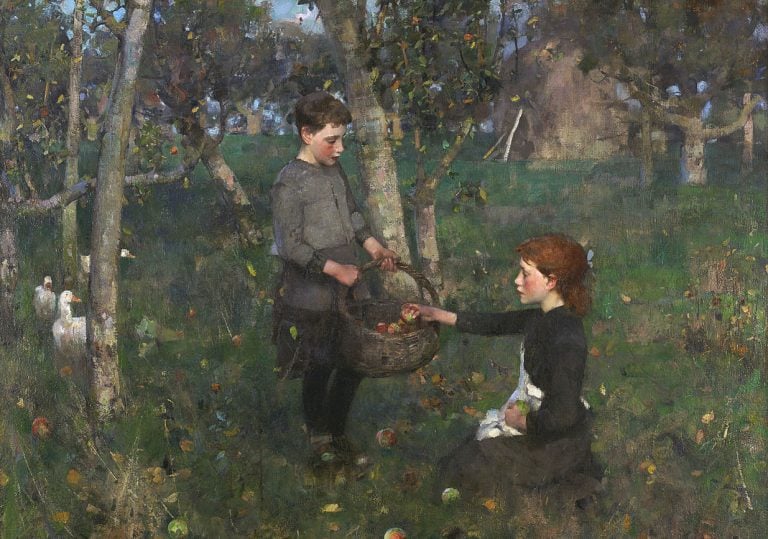 The Most Bizarre Building in Scotland: Pineapple House

The Glasgow Boys were a group of Scottish Impressionists who placed the city of Glasgow on the artistic scene in the last third of the 19th century. Their avant-garde style rejuvenated the Scottish pictorial panorama and brought Impressionism to Scotland. Their innovative pictorial tendencies and the distancing from Academicism were groundbreaking and revolutionary at the time, bringing modern painting to Scotland. The most prominent figures of the group were James Guthrie (1859-1930) and John Lavery (1856-1941).

As it is widely known, Impressionism may be one of the most influential, recognizable and loved artistic movements, despite its harsh beginnings and its initial detractors. When we talk about Impressionism, we all think about colorful sunrises, dancing ballerinas, beautiful landscapes executed en plein air, and, of course, water lilies. Great artists like Edgar Degas, Édouard Manet, Claude Monet, Camille Pisarro or Auguste Renoir stood out in this movement truly creating masterpieces, having the support and admiration of famous writers such as Emile Zola and Stéphane Mallarmé.

But what do all these great artists have in common? They were all French. This is why we tend to relate Impressionism with France. Even though French Impressionists might be the highlights of Impressionism; let me tell you a secret: the truth is that there’s much more of this magnificent style beyond France’s borders! Have you ever heard before about the Scottish Impressionists? Let’s discover them together on this exciting journey to Scotland!

The Glasgow Boys were a group of about 20 painters from different backgrounds who were united by ties of friendship. They were all based in Glasgow, where they lived, shared studios, painted and, of course, exchanged artistic ideas. In fact, they didn’t have a common statement or manifesto, but they were all interested in overcoming pictorial Academicism and managed to oppose the guidelines set up at that time by the Royal Scottish Academy.

At the beginning of their production, the Glasgow Boys were inspired by French and Dutch Realism. In particular, they were deeply influenced by the French Naturalist painter Jules Bastien-Lepage (1848-1884).

By the late 1880s, the Glasgow Boys began to develop a style close to Impressionism, bringing this avant-garde style to Scotland. Thus, these Scottish Impressionists stood out for their great use of color, pattern, and texture in their paintings. As well as other European Impressionists of the time, they were inspired by Japanese art and included in their artworks the flattened forms of Japanese prints. They also represented a change because of their interest in everyday characters, such as rural people, and daily life topics.

As well as the French Impressionists, they revolutionized the pictorial technique by en plein air manner. As a result of these stylistic innovations, from this period the city of Glasgow is the one that acquires artistic protagonism in Scottish territory, to the detriment of Edinburgh.

The Glasgow Boys group was active at the time of the great industrial and economic expansion of Glasgow during the 19th century. One can establish a reciprocal relationship between the economic expansion of the city and the progressive interest of the wealthy citizenry in art. Consequently, It can be said that the artistic group benefited from this economic growth, especially from the enrichment of the bourgeoisie and the upper-middle class. The greater prosperity and the increase in the capacity of acquisition led to a greater interest in art and to a progressive refinement of the public’s tastes.

The Glasgow Boys also counted on and enjoyed the support of important collectors and art dealers, who acted as patrons and also stimulated the innovative and nonconformist spirit of artists such as Alexander Reid. This dealer, who personally knew painters such as Vincent van Gogh and Paul Gauguin, financed and supported the Glasgow Boys. They also brought works by the French Impressionists, the Hague School, and Barbizon painters to Glasgow, inspiring the young Scottish artists and opening up new horizons in the artistic field.

Two of the most preeminent figures were James Guthrie (1859-1930) and John Lavery (1856-1941). The former was self-taught, but that did not prevent him from becoming the mainstay of the group. He received his influence from the French painter Gustave Courbet. After returning from a trip to Paris in 1883, his style moved closer to Impressionism. The day-to-day matter of the topics and the new treatment of tonality and brushstroke in his later paintings manifest this change. One of his earliest works, A Highland Funeral, seems to have been directly inspired by Courbet’s The Burial at Ornans. With this work, Guthrie began a new phase in terms of subject matter and style, shortly after returning from his stay in Paris in 1883, where he may have been inspired.

However, it is possible to glimpse a clear evolution in his style in later works such as A Hind’s Daughter, in terms of the anecdotal, everyday subject matter, but also in the treatment of tonality and brushstroke. This new style culminated in works such as In the Orchard, in which the foliage, trees and grass are painted with a clearly Expressionist attitude.

As to John Lavery, he was Irish by birth but he settled in Glasgow after having contemplated Guthrie’s works. He studied in London and Paris but returned to Glasgow in 1885. Besides Guthrie, Lavery took as his model the precursor of Impressionism, Édouard Manet. At the beginning of his career as a painter, John Lavery made a name for himself as a portraitist of high society. He also painted genre subjects, contemporary scenes such as the Glasgow International Festival of 1888, and landscapes. He pursued the en plein air style and in his artworks he emphasized color and brushstroke, thus opposing traditional forms of painting. As well as many other impressionists, Lavery focused particularly on capturing human figures in movement in the open air.