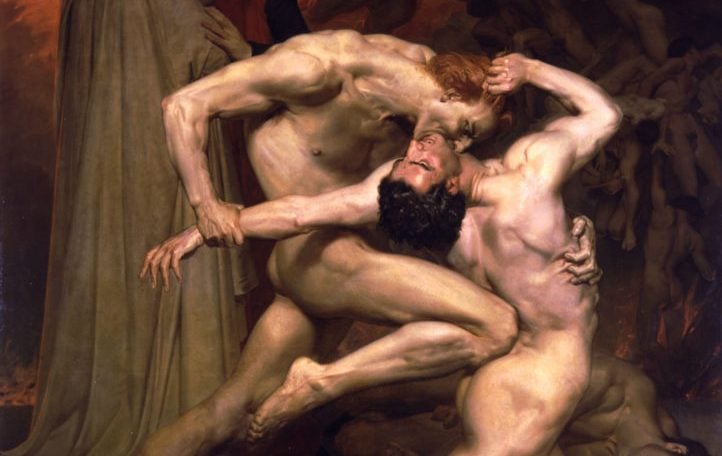 Academicism was the dominant style in European art in the 18th and 19th centuries. It was called so because it was dictated by the French Academy of Art (Académie des Beaux-Arts), which was the most influential art institution back then. If somebody wanted to make a career, they needed to follow a few simple rules; excellent disegno (drawing), realistic colors, and… lots of naked bodies on canvas!

It was a joke, but there was a grain of truth in it. Young students of the Academy had to study anatomy of classical sculptures (mostly naked) and live models (yes, naked) in order to master their drawing skills.

Historical paintings focused not only on events in history, but also on grandiose narrative stories. These include ancient mythology or Dante‘s Divine Comedy, for example. They rendered bodies in classical poses (contrapposto), and advocated classical and harmonious beauty. Moreover, most bodies were male. However everything changed when Romanticism and Orientalism appeared on the horizon.

Jean-Léon Gérôme was one of the most famous representatives of Academicism, with a very diverse oeuvre ranging from portraiture to historical painting and oriental scenes. His attention to detail and photographic “realism” of the depicted scenes, which often were completely imagined and painted in a studio, made his works exquisite and very sought after. He was also a master of covert eroticism; he loved to paint naked women. In order to do this without social reprimand, he would place them into mythological or Oriental contexts. In this way he illustrated and/or inspired the fantasies of many 19th-century gentlemen.

(Every time I look at this painting, I am astonished how cheeky Gérôme must have been to place Galatea’s bum cheeks in the center of the composition. I just can’t get over it.)

Although Orientalism and Romanticism treated nudity with more free rein than Neoclassicism, they still had some constraints to protect the morals of the viewers (ekhm…). For example, nudes always had their genitals covered. Pubic hair? No way, it was too scandalous, too dirty, too real. In the end, all these naked women were not real women. They were just symbolic/fantasy figures which did not have much in common with corset-bound housewives and maids that gentlemen came across in real life.

Hubert Robert was an immensely popular French painter from the 18th century best known for his skillful landscapes, particularly his landscapes that...

Have you ever wondered where the world’s most famous artists went to school? Many studied at one (or more) of these six art academies. The schools...