Venice in the Eyes of Claude Monet 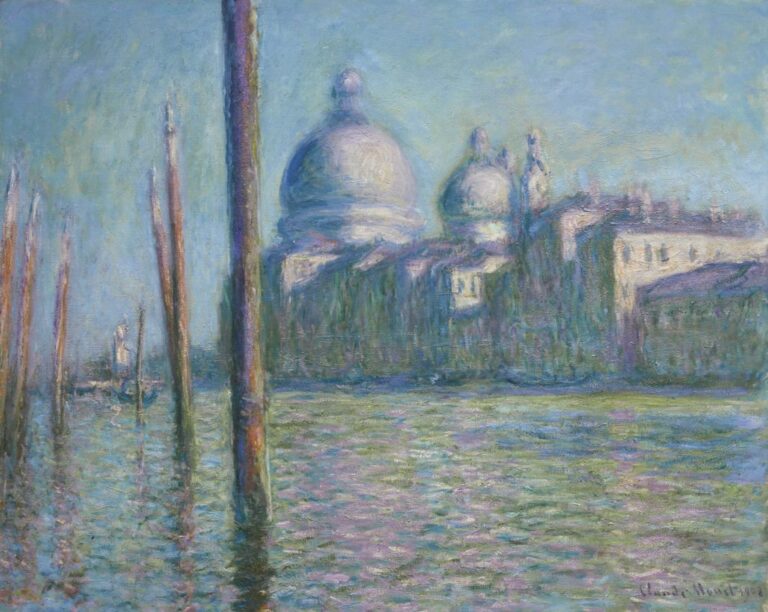 Claude Monet fell in love with Venice the first time he saw it. He was 68 years old, and he went on a trip with his wife, Alice Hoschedé. The light and colors of Venice seduced the painter, like many other artists before. After just several days of looking for locations, Monet felt an urge to paint.

Monet painted 37 canvases featuring a dozen different views, taken within a short distance of one another. They were finished later in the studio, but Monet had considerable doubts at the beginning. He wrote to his art seller Gaston Bernheim:

“Although I am enthusiastic about Venice, and though I’ve started a few canvases, I’m afraid I will only bring back beginnings that will be nothing else but souvenirs for me”.

Local painters have been creating pictures of Venice and selling it to the tourist from 16th century. Those images became very popular in the last decades of the 18th century while the wealthy European aristocrats traveled on so-called Grand Tours. Monet’s fear was a serious one. It was easy to fall into a cliché when it comes to Venice.

Monet set his heart on the well-known landmarks near the Grand Canal -the Doge’s Palace and San Giorgio (which could be viewed from his hotel) or da Mula Palace- or on such typical scenery as Rio de la Salute. Joachim Pissarro has given a detailed account of Monet’s working schedule while he was in Venice:

“After so much procrastination, Monet soon adopted a rigorous schedule in Venice. Alice’s description of his workday establishes that from the very inception of his Venetian campaign, Monet organized his time and conceived of the seriality of his work very differently from his previous projects. In Venice, Monet divided his daily schedule into periods of approximately two hours, undertaken at the same time every day and on the same given motif. Unlike his usual methods of charting the changes of time and light as the course of the day would progress, here Monet was interested in painting his different motifs under exactly the same conditions. One could say that he had a fixed appointment with his motifs at the same time each day. The implication of this decision is very simple; for Monet in Venice, time was not to be one of the factors of variations for his motifs. Rather, it was the ‘air’, or what he called ‘the envelope’ – the surrounding atmospheric conditions, the famous Venetian haze – that became the principal factor of variation with these motifs”

Joachim Pissarro, Monet and the Mediterranean, 1977.

Few days after Monet’s return to Paris, Bernheim-Jeune acquired twenty-eight of the thirty-seven views of Venice, although Monet kept the pictures in his studio until 1912 to add their finishing touches. After the death of Alice in 1911, Monet finally agreed on a date for the exhibition at Bernheim-Jeune. Claude Monet Venise opened on May 28, 1912, and was greeted with significant critical acclaim.

What do you get when you add some light, some inspiration, and some musical color? You get the recipe for cutting-edge content that will change how...