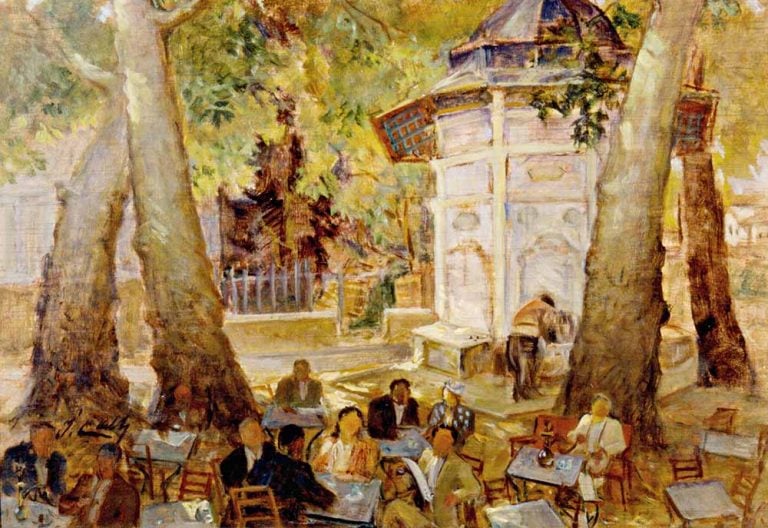 The Magic and Splendor of Karagöz – Turkish Shadow Puppets

Impressionist İbrahim Çallı’s paintings portrayed the society in which he lived in a very raw sense. Born in Turkey, educated in France and having been through World War I, Çallı created paintings of landscapes, nudes, still lives and portraits. By trying several genres of painting during his career, Çallı was the Stanley Kubrick of painting in 20th century Turkey.

Ibrahim Çallı was born in 1882 in the little town of Çal, near Denizli, Turkey. His interest in fine arts started at an early age. Later, in Istanbul, he was taking painting lessons from one of the most prominent painters of the time, Roben Efendi, once he could save a little bit of money. During this period, the young artist met several important people from Istanbul’s intellectual society. In 1906, a few of these people referred Çallı to the Fine Arts Academy of Istanbul, an outstanding art school at the time.

Çallı studied there until he took part in a painting contest with his works Naked Man and Sergeant Maksut from the Sentry Regiment of the Operation Army. His works received highly positive feedback and won him first place in the contest. After this, he was offered a scholarship program in Paris to receive further art education.

In Paris, Çallı worked in the studio of Fernand Cormon, where he gained profound skills. While working with Cormon, the young artist also developed an interest in Impressionism. Impressionist style, in combination with his assorted compositions, was later going to characterize Çallı’s unique aesthetic in painting. With the outbreak of World War I in 1914, Çallı had to move back to Turkey.

Once in Istanbul, the artist started working as an art teacher in the school where he studied, the Fine Arts Academy of Istanbul. As a teacher, he tried to push boundaries and introduce new methods to his students. He upheld painting in front of actual sceneries and food items when painting landscapes and still lifes as, before then, the students were imitating other paintings or photographs. After several disagreements with other academy members, Çallı decided to retire from his beloved teaching position in 1947. In 1960, he died of gastrostaxis in Istanbul.

Çallı was an outstanding artist who synthesized the French style of Impressionism with Turkish compositions and settings. In his works, he portrayed the many different ways of living throughout Turkey. His characteristic choppy brushstrokes, blurry ambiances and vibrant colors were a great source of inspiration for his contemporaries. He was so influential on other artists during his time that, later, his generation of painters was named the “Çallı generation.”