Bringing Up Baby – The Art of Parenting Through the Ages 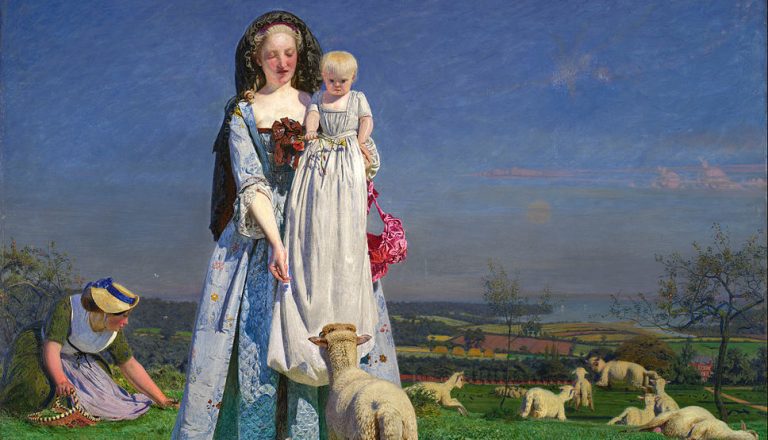 Childcare can take so many forms. Kids throughout history have been raised by gay dads, lesbian moms, whole villages, singles, and adoptive parents. So many families are drawn together by love – not blood, by necessity – not nature, so let’s take a tour of parenting art – some traditional and some downright shocking!

Raised by Wolves, Centaurs, and Birds!

Tales of babies left in the woods – lost, abandoned, or stolen, occur in all cultures across the globe. Mowgli in Jungle Book was raised by a whole host of animals. But Rudyard Kipling was rather late to the party with his feral child. Achilles, son of Thetis was brought up by a centaur. Paris of Troy was suckled by a bear. In the classic Persian tale of Shahnameh, (or Book Of Kings), albino Zal is cast from his family and raised by a bird. Many a wild child has been raised by wolves, perhaps the most famous being Romulus and Remus, twin brothers fed by a woodpecker and a she-wolf.

The story of Laocoön varies across storytellers, but is basically the tale of a father unable to save his children from monstrous sea serpents. These near life-size figures were excavated in Rome in 1506. Laocoön, a Trojan priest is attacked by the Gods for some presumed wrong-doing. His fearful younger son is being crushed in the tight coils of the serpent. The other, possibly poisoned, is pulling away while his father, Laocoön, is in torment. We can’t always save our children and sometimes the worst happens.

Who are the first parents in art history? Pre-historic art shows us the mother goddess, fecund and voluptuous, sovereign force of creation, but she is rarely accompanied by her offspring. In the West, we are told the first dad was God the Father. First we see just his hand – early Christian artists avoided pictorial depictions of God. But by the Renaissance, he is everywhere (as befits an omnipotent being I suppose!). Michelangelo probably gets top spot here, with his Creation of Adam. For Christians at least, here is the first parent and the first child.

From the earliest times, across all cultures, there are stories, origin myths, statuary and artworks that reference the mother.

The Madonna is a central icon of Catholic and Orthodox religions. There are thousands of paintings of Mary the mother of Christ, from early Christianity through to the Renaissance masters and on to the modern day. But throughout history, she is still the pained martyr whose sole duty is to nourish then give up her child.

Sometimes the whole family spends their days together, working to put food on the table – look for the baby nestled in the hay while the farmers bring in the harvest. For these families, there was no school. Their life was learning how to survive and how to work. Sometimes even the horse was part of the family!

When there is no work, a parent struggles to provide even the basics of life. In 1936, in the USA, Dorothea Lange photographed Florence Thompson, mother of seven children. In the midst of the Great Depression, the woman had just sold her car tires to buy food for her children. The image became part of a campaign demanding help for starving migrant workers.

It Takes a Village

Hutterites are a North American communal religious group. They believe in a rural lifestyle and establish village-like settlements or colonies. They can only marry within their own church. The colony is like a huge family and everyone works within it. School begins at age 2 and teaching is carried out by older women from within the community. Children leave school and join the adult community at age 15.

Wet-nursing is an ancient practice, common across many cultures. There are parts of the world where mothers breast-feed each other’s children, and these milk-siblings are believed to have a special bond. In the West, many royal or aristocratic mothers chose to employ women to feed their children. The nurse would often live within the household as a servant. In the USA, Brazil, and other colonized nations, the legacy of slavery adds a bitter taste to the wet-nursing story, where enslaved black women were forced to feed their owner’s white children, sometimes at the expense of their own infants.

This beautifully composed shot of a quick kiss before heading out for a walk was considered unpublishable by Life magazine back in the 1980s. But, the image did make it out to the wider public eventually. Michael and Robert raised four children between them and are proud to have been part of the history that raised the issue of parental rights for gay parents to a wider audience.

Art history would have us believe the white Christian nuclear family is the pinnacle – The Holy Family setting the model for all time. Galleries are filled with paintings which focused on the father’s place as head of the family, emphasizing his historical role as the economic provider, lord and master.

Dutifully following a few paces behind the fierce patriarch, the sentimentalized image of the adoring mother remained popular throughout Western art history. It shows the good wife who protects her family from the harsh realities of the outside world, who loves her innocent children and creates a haven of sublime family bliss. These women are allowed domestic authority without any danger of depriving men of their true power and superiority.

Of all the art dads in the world, Paul Gauguin is possibly one of the worst. The infamous Post-Impressionist fathered at least eight children, five with wife Mette-Sophie Gad. He assaulted Mette in front of his children and cruelly played favorites with them. Tired of Paris, and his first family, he moved to Tahiti, took a number of teenage wives and mistresses, and had at least three more children, also abandoned. He died alone and syphilitic, full of morphine. Way to go Gauguin!

Considered the ultimate sacrifice, this Biblical story shows Abraham willing to kill his child Isaac at God’s request. Filicide is not actually recommended in any of the good parenting handbooks. However, it is a very theatrical scene beloved of painters, so we see Abraham’s story recreated by many great artists, along with Medea killing her children after being abandoned by her husband Jason and Agamemnon sacrificing his daughter Iphigenia.

Moving on to a sweeter image of a parent, look at Micheal Andrews, teaching his daughter to swim. Based on a photograph of an actual event, this is a beautiful scene of a trusting daughter, being patiently and gently tutored in the art of swimming. The scene is also a metaphor for the caring parent, leading their child out into the world and society.

A harsh and unsympathetic economic system can make parenting literally impossible. Many parents through history have been forced to give up their children to foundling hospitals, orphanages, or move the whole family into the workhouse.

Some fared better than others. Such families were totally dependent on the humanity of their fellow man and woman, which varied widely.

Without a parent, the orphan child is vulnerable. A caring community will take the child to its heart and find an adoptive family. Others are placed in institutions, with the great and the good deciding their conditions and their futures. Others are left to die in the streets.

Of course one of the most famous foundlings was Moses, found in the bullrushes, shown above. In 18th century London, Thomas Coram was the Founder of the Foundling Hospital, which later became Great Ormond Street Children’s Hospital. He was appalled by the sight of abandoned children dying on dung heaps in the streets. Between 1741 and 1954 the hospital saved 25,000 children! Thomas Coram, William Hogarth, and George Frederick Handel were all on the board of governors at the Foundling Hospital and Handel even used to put on performances of Messiah in London to raise funds for the children.

Not everyone has good memories of their childhood. Playing “happy families” has been even harder in these COVID-19 lockdown days. Paula Rego’s families often appear quite dysfunctional, but even the little monsters shown above can’t quite match Lot’s family, as depicted by Artemisia Gentileschi.

Lot’s family fled from the destroyed city of Sodom (you can still see it smoldering in the background of the painting). Lot’s wife disobeyed instructions not to look back and was turned into a pillar of salt. Seems a bit harsh – she is just visible on the left. Fearing this was now the end of their family line, Lot’s daughters hid in a cave and got their father drunk so that they could then seduce him. Those Old Testament families really could make you squirm.

Let’s end on a beautiful image by Zun Lee, who produced a whole series of photographs showing African American fathers. Often dismissed culturally as absent dads, these men challenge the stereotype and give us a glimpse into special moments of lives not celebrated nearly enough in Western culture.

The family is the place from where we head out into the world. We all have our own stories about the parenting we received: the good, the bad and the ugly. It’s time to cast out the tired old ideologies about who can parent, and how. Maybe if we accept that parenting and childcare can take all kinds of forms, and come from all kinds of unlikely places, then we can get on with the job in hand, which is to raise the next generation, with hope, kindness and joy.