As many other Oskar Kokoschka's works, also this one met with mixed feelings from the public. In the end, it was meant to be a children's picture-book, but its images were penetrated with sensuality and eroticism, too 'adult' to be shown to innocent eyes, according to many parents. "Not for children of the philistines", commented the art critic Ludwig Hevesi, yet the book was allowed to pass to print, thanks to the striking quality of its colour litographs. 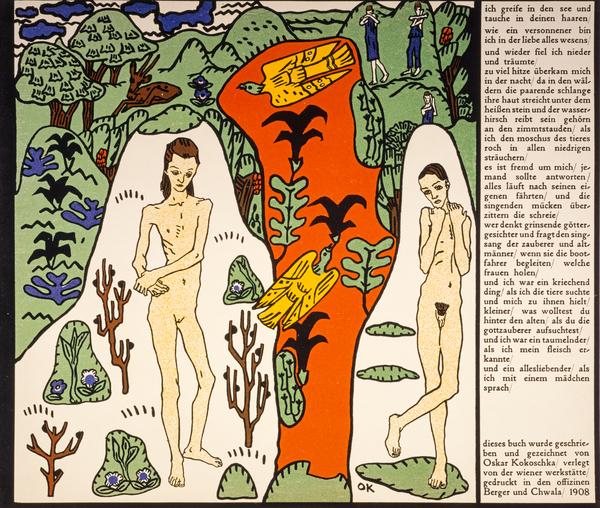 Oskar Kokoschka, Die träumenden Knaben [The Dreaming Youths], 1908, The National Galleries of Scotland[/caption]Commissioned from young Kokoschka by the Wiener Werkstatte in 1907, the Dreaming Youths was begun in November 1907 and completed in March/April 1908. At that time, Kokoschka was studying at the Viennese School of Applied Arts, learning the Jugendstil style and looking up to the 'Klimt Group' (indeed, the book was dedicated to Klimt 'in admiration'). His course included printmaking, bookbinding, typography and life drawing, for which Oskar studied children from circuses and street urchins. [caption id="attachment_17603" align="aligncenter" width="700"] 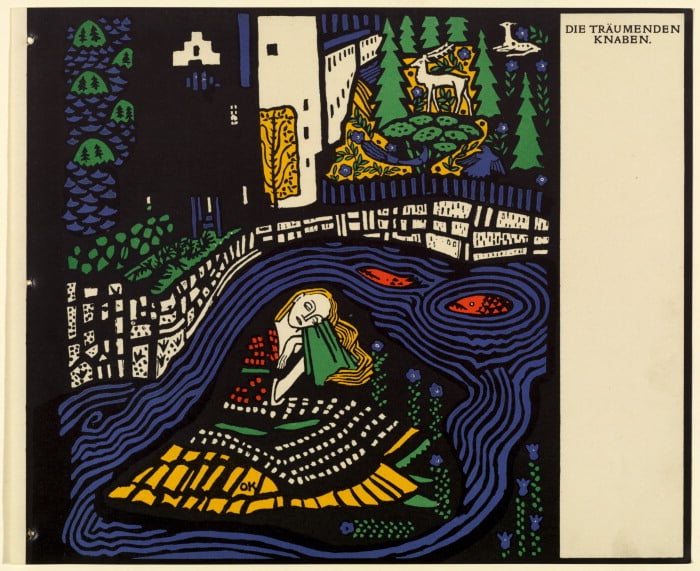 Oskar Kokoschka, Sleeping Girl from Die träumenden Knaben [The Dreaming Youths], 1908, MoMA[/caption]Drawn rapidly and often in motion, Kokoschka's angularized figures are partly inspired by Georges Minne's sculptures, while the general style draws on Japanese woodcuts, Austrian medieval and folk art (which enjoyed a revival in those years), and Van Gogh's painting. Of course the shadowless outlines and stylized decorations refer to the Jugendstil formation of Kokoschka, but rather than simply dialogue with the contemporary art styles, the litographs foreshadow the intensity of Expressionism, of which Kokoschka was a founder. [caption id="attachment_17604" align="aligncenter" width="700"] 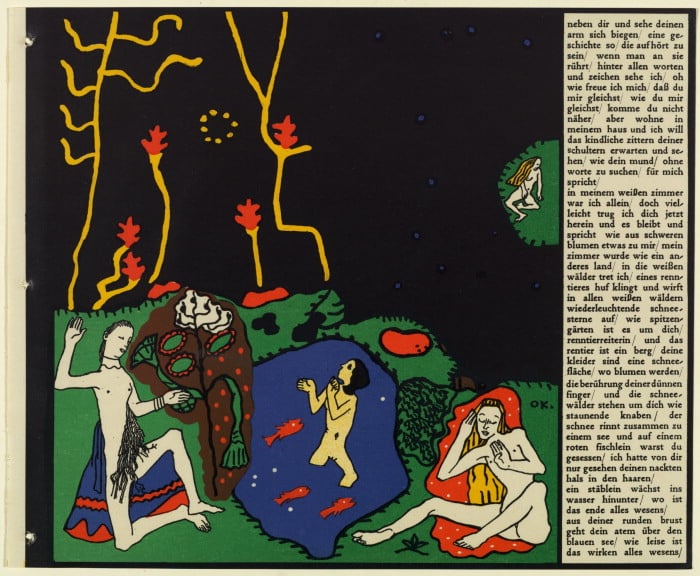 Oskar Kokoschka, Eros from Die träumenden Knaben [The Dreaming Youths], 1908, MoMA[/caption]Exhibited during the summer show of the Secession, they represented a turning point for the 21-year-old artist. Not only did he make the images, but also dealt with typography and wrote the text, which is a 'love poem', written in prose. Its subject is the adolescent yearning for love, the erotic fantasies and torments of the age of puberty, a theme complemented rather than explained by the images, in which sexual symbolism abounds (look out for repeating red elements, since red, his favourite colour, became his symbol for female sexuality). [caption id="attachment_17605" align="aligncenter" width="700"] 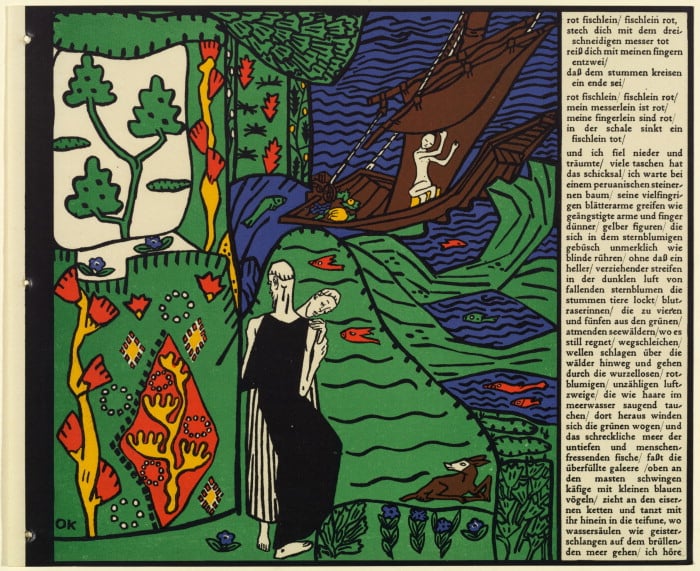 Oskar Kokoschka, The Ship from Die träumenden Knaben [The Dreaming Youths], 1908, MoMA[/caption]Expressive shapes of flowers and exotic trees, humans with outstretched arms or enveloped in draperies, foxes, stags and fish, are all absorbed in melancholy and express an urgent need for intimacy and love, which as Kokoschka admitted, was a record of his own state of mind: [caption id="attachment_17606" align="aligncenter" width="1098"] 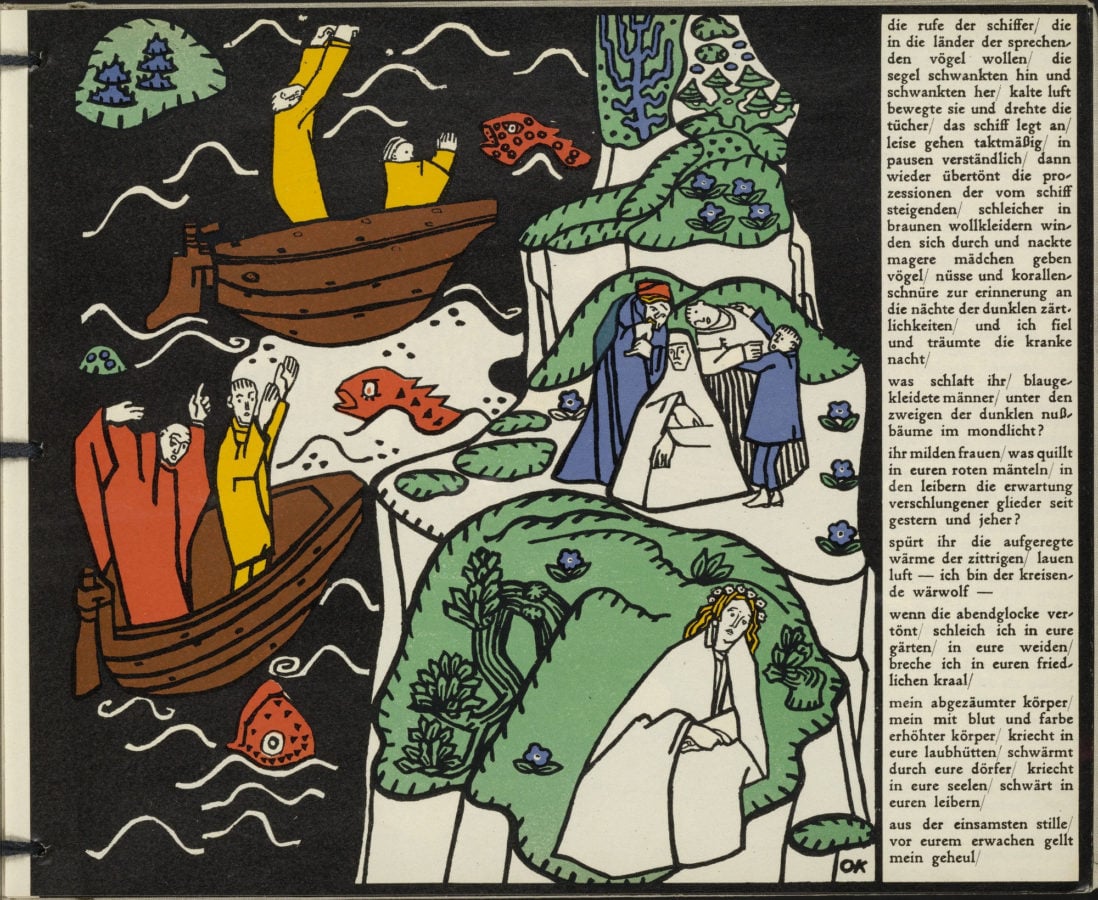 Oskar Kokoschka, Boatmen calling from Die träumenden Knaben [The Dreaming Youths], 1908, MoMA[/caption]I was in love with the heroine, the girl Li 'from the lost bird-forests of the North', in real life a young Swedish girl called Lilith who attended the Kunstgewerbeschule [Applied Arts School], and wore a red peasant-weave skirt such as people were not used to seeing in Vienna. Red is my favourite colour, and the book was my first love letter. But she had already gone out of my life by the time it appeared.