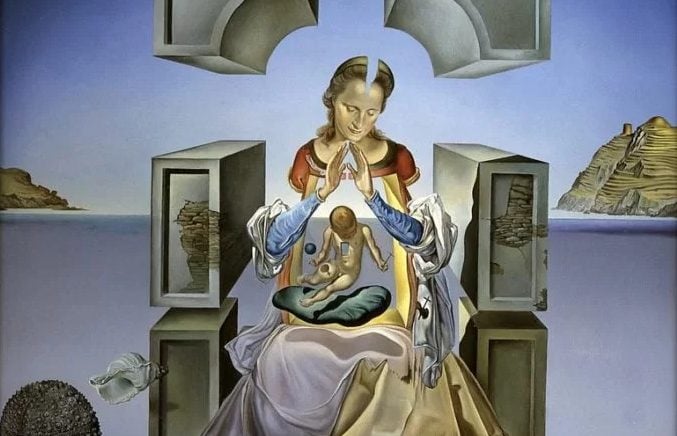 Salvador Dalí’s The Madonna of Port Lligat is an image of Mary holding baby Jesus in her lap. Seems simple, but it has layers upon layers of meaning. For example, symbolism that looks forward to Easter – the Crucifixion and birth of new life. It is also a deeply personal image, based on Dalí’s wife and showing his hometown in Spain.

There are two versions of Salvador Dalí’s The Madonna of Port Ligat. One lives in the US in the Haggerty Museum of Art and the other lives in Japan in Fukuoka Art Museum. Together they are a captivating game of spot-the-difference and guess-the-meaning.

It looks as if the first altar scene slowly rumbled backward and elements of the painting moved or grew, and new aspects emerged. Madonna’s clothes get disturbed, as she moves her foot out; the altar both grows (the bottom part raising upwards) and decays; and the sea urchin (a symbol of fertility, a flower of the sea) shrinks, splits, and falls. The clouds roll in and the color palette darkens.

The images of fertility abound in the second painting. There are now numerous women present. Two cuttlefish morph into three women, or possibly angels, hovering above the sea.

If you look closely at the deep red curtain in the top right, and the silvery shape in the bottom right alcove, both resemble female faces. The women in the painting are in fact one woman, Dalí’s wife Gala. Port Lligat was their home in Spain and she is the Madonna.

The first Madonna is the visual focal point of her painting, while in the second she is not. In the Japanese painting the eye is first drawn to Jesus, and then around the myriad details of the composition. In this version, both Madonna and Christ have rectangular holes in their chests.

The Body of Christ

While Christ fills the torso of the Madonna, the broken bread, which is known as “the body of Christ” in the Christian Eucharist, fills the inside of Christ. The landscape provides the next layer of meaning. In the second version of the scene, the background gives a vision of the cross. The horizon line at halfway with the contrast of still and stormy skies comes together with the prominent shadows from the two islands. This careful balancing juxtaposes sea and sky – heaven and earth. In Christianity, Jesus bridges the gap between heaven and earth – just as Dali’s painting literally depicts.

In both paintings, the objects that surround the Madonna and Child enhance the painting’s mediation on the religious themes. A shell, reminiscent of Botticelli’s Venus (who is another divine figure born without sex), is the origin of a fine thread. This thread allows an egg to hover prominently amid storm clouds and between the gap at the top of the altar.

The egg is a smooth white ostrich egg, another symbol of purity and virgin birth – due to the medieval myth that the ostrich eggs were hatched by sunlight.

The shell and egg are aligned with the sheath of wheat and a rose, which hover vertically at the bottom of the altar. The wheat links to the other pieces of bread in the image: the body of Christ and the basket that sits on the lower part of the altar.

These images align with the altar to create the sign of the cross, which is completed by Christ’s outstretched arms and a line dividing heaven and earth.

The crucifixion is also referenced by the long nail that is affixed to the left side of the altar. From this, a second thread suspends a piece of decaying meat. The new curtains that hang at the top corners could also be an allusion to the event of the temple curtain splitting at the moment of Jesus’ death on the cross.