Giotto di Bondone is known as the artist who in the 13th century began to paint in a way that led art history to Renaissance. This Florentine painter revolutionized the depiction of the human form. As the late-16th century biographer, Giorgio Vasari said of him: “He made a decisive break with the crude traditional Byzantine style, and brought to life the great art of painting as we know it today, introducing the technique of drawing accurately from life, which had been neglected for more than two hundred years.”

The Ognissanti Madonna is the only panel painting by Giotto that has been universally accepted by scholars, despite the fact that it is undocumented. It was painted for the church of the Ognissanti (All Saints) in Florence, which was built by an obscure religious order known as the Humiliati, now unexistent. This large painting (325 x 204 cm) was probably made as a main altar of the church. 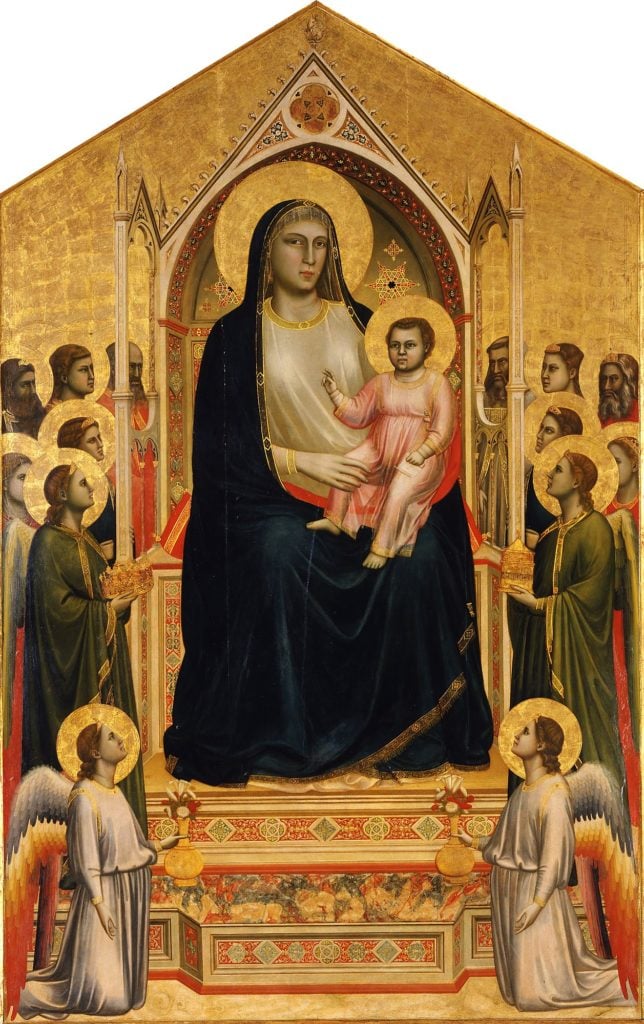 The painting has a traditional Christian subject, representing the Virgin Mary and the Christ Child seated on her lap, with saints and angels surrounding them on all sides. This particular representation of the Virgin is called a Maestà, and it was a popular representation at the time because of the Madonna Rucellai by Duccio, begun in 1308, the one-time altarpiece of the cathedral at Siena, and through the great fresco in the Sienese Town Hall, completed by Simone Martini in 1315. These two examples of mature Sienese art have a relatively wide format: the numerous saints or angels kneel and stand in rows to the left and right of the Virgin’s throne. They look at Virgin Mary but all of them seem to have a life of their own. They are painted on one panel, but we don’t see any relation between them. 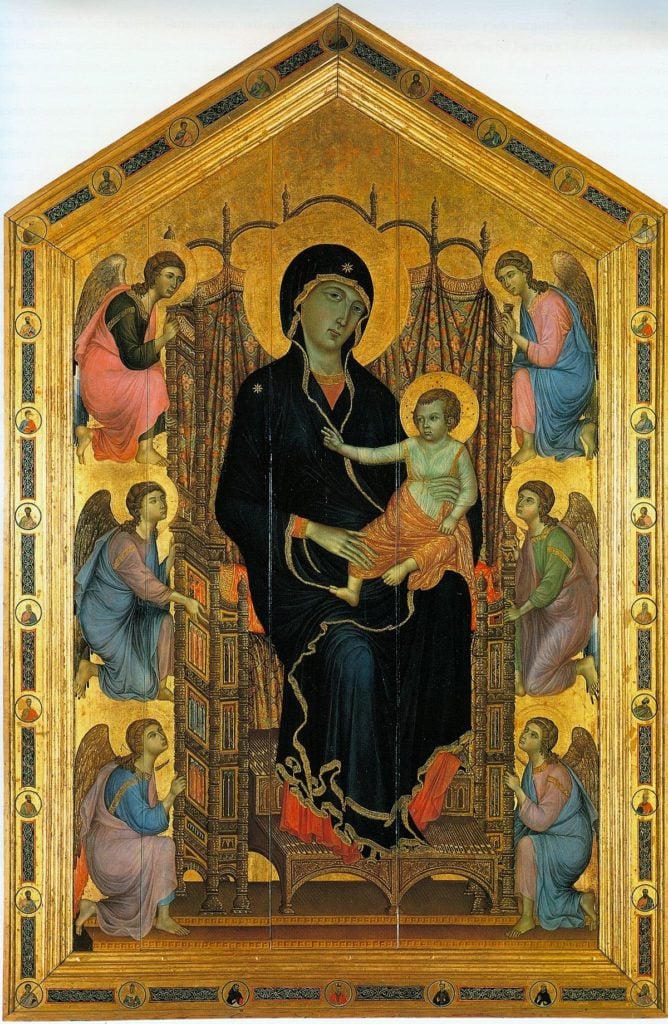 Everything changes in Ognissanti Madonna. The Virgin is holding the Child, who is giving a blessing with his right hand, while in his left, he holds a rolled scroll, symbolizing knowledge. Around the throne is a pointed tabernacle, inlaid with colored marble, reminiscent of the Gothic architecture that was fashionable in the 1300s. The virgin is dressed in a white dress – usually at that time it was painted blue (like in Rucellai Madonna) but white was worn by the Humililati – it was their color. 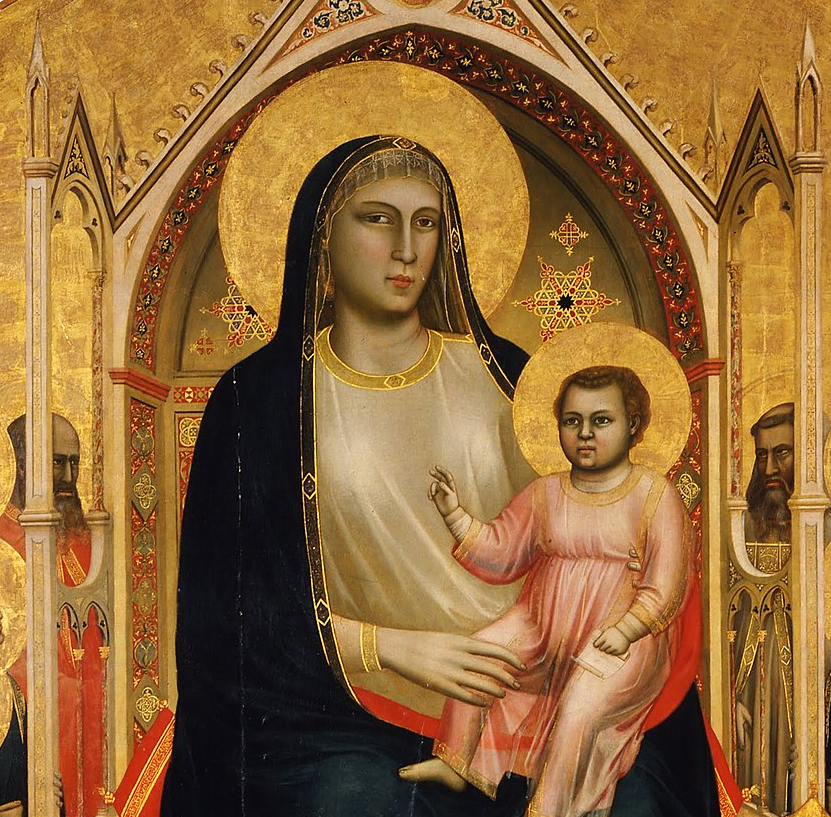 Now, look at the group of saints and angels. The angels, who are kneeling at the foot of the throne, offer vases of roses and lilies, a reference to purity and charity, while the ones to the side of the throne are holding out a crown and a pyx, a religious item that likely refers to the Passion of Christ. The saints are partly covered by the architecture and halos, which as well as suggesting the existence of a solid space in which the figures have been placed. They look a bit like Peeping Toms but of course their faces are very serious and focused on the adoration. The faces are individualized and realistically painted. 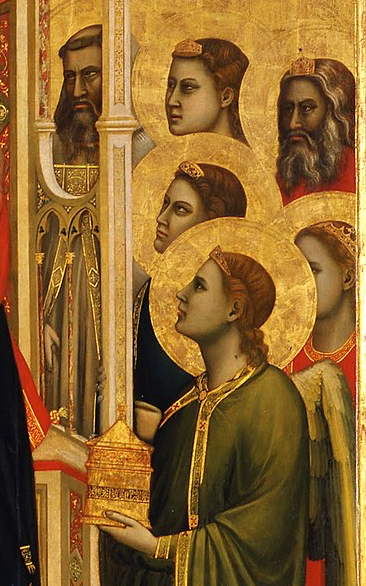 Ognissanti Madonna was painted when Giotto was already extremely well known (he already did Scroovegni Chapel in Padova) and was in great demand all over Italy. This masterpiece stands out for the naturalism with which it develops this traditional subject. The decorative elements on the clothing are reduced to a minimum to bring out the full plastic nature of the bodies, which are shaped by light and shade. For over a century, this composition was a model of inspiration for Florentine painters.

If you find any joy and inspiration in our stories, PLEASE SUPPORT
DailyArt Magazine with modest donation. We love art history and we want to keep going with writing about it.
$5 $10 $25 $50 $100 MONTHLY
Related Topics:featured, Giotto di Bondone