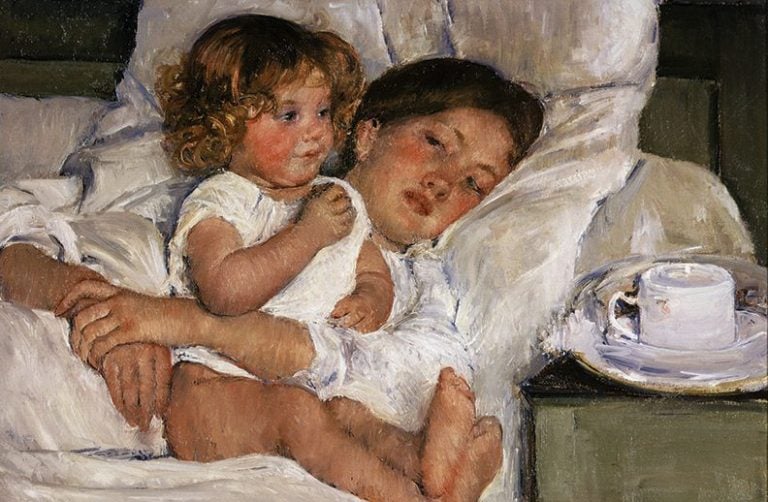 Is it possible to combine art and motherhood? This question never seems to go away. There is no denying that female artists do have a gendered experience of art. They are underpaid and under-represented across the art world. Let’s see some artworks of those women who managed to become artists.

It is said that Mary Cassatt, whose work primarily featured themes of motherhood and femininity, never had children because she believed it would compromise the quality of her art. Fast forward to 2004 when Tracey Emin controversially said,

There are good artists that have children. Of course there are. They are called men.

German painter Paula Modersohn-Becker wrote in detail about her need to delay motherhood in her pursuit of artistic freedom. She died tragically, aged 31, of a post-partum embolism just days after her daughter, Mathilde, was born.

However, there are other, more expansive, more inclusive narratives. Acclaimed novelist Chimamanda Ngozi Adichie, said the thing that surprised her most about motherhood was that “it hasn’t been a taking away, it’s been an adding.”

So let’s take a look at women who did decide to combine both art and motherhood, and who furthermore depicted their own children in their work.

Berthe Morisot (1841-1895) was part of the French Impressionists’ group that included Paul Cézanne, Edgar Degas, Claude Monet and Camille Pissarro. Morisot collaborated with Édouard Manet for many years and married his brother, Eugène Manet in 1874. Together they had a daughter, Julie. Morisot produced around 150 paintings of her daughter, each artwork offering a glimpse into her daughter’s transformation through the years. Apparently, Julie’s favorite was Young Girl With Doll from 1884.

Julie Daydreaming, painted in 1894 is the last in the series. Just a year later, when Julie became ill with pneumonia, Morisot tended to her. Tragically, Morisot contracted the same illness and died in 1896.

Critics have said of Morisot’s work that she is:

alive to a world of understated, often domestic emotion that scarcely registers in the work of the male Impressionists.

Martin Gayford, “At home with the Manets“, The Telegraph.

Poet Paul Valéry, related to her by marriage, said that Morisot was

living her painting and painting her life, as if this were for her a natural and necessary function, tied to her vital being.

she never wearied of putting her smiling maternity on her canvases.

But Vigée Le Brun, a prominent 18th century portrait painter was unapologetic about her desire to paint her daughter. In her diary, she wrote

The beauty of her heavenly face, that expressed benevolence and goodness, and whose features were so regular and delicate, the loveliness of her figure, neck, and arms, the exquisite freshness of her complexion – all was enchanting beyond anything imaginable.

Vigée Le Brun’s first self-portrait of her and Julie caused a scandal when it was exhibited because she was depicted cradling her daughter in a relaxed manner, smiling open-mouthed, and visibly enjoying her child. Ignoring rules about facial representation and refusing to play the demure domestic Madonna, Vigée Le Brun is possibly the most radical painter of her period.

Just like Morisot, Vigée Le Brun painted many pictures of her daughter as she matured. In this composition, she breaks painterly rules again, ingeniously presenting the child in both profile and full face. She captures Julie’s serious, intimate gaze, looking both at herself, but also out at us, the viewer.

Mary Kelly’s Post Partum Document is a deep philosophical exploration of the twinned joy and boredom of motherhood. As befits a conceptual artist, this is no ordinary “portrait” of her son. But it records, in minute detail, six years of his life and his development, consisting of perspex units containing using soiled nappy liners, and typed text describing conversations and feelings over which the child has scribbled crayon drawings.

This controversial work has had a profound effect on the development of conceptual art. Mary Kelly (born in 1941) said of the work that she wanted to explore the contradictions between working as an artist and her role as a mother – between “my lived experience and my analysis of that experience”.

Louise Bourgeois (1911-2010) is perhaps most famous for her Maman spider – a giant sculptural portrait of her own mother. However, while raising three children in a small apartment, she moved from sculpture to painting and printmaking. In 1994 she painted her children in the bathtub. In the accompanying exhibition catalog she said:

This is the bathroom at 18th Street. Everything is exactly the same, the cabinet, the tub with the feet – it is very accurate. I’m asked all the time, but I never say it was a lot of work to get through the day. It was really something to have three children and also try to work. It was a lot of physical work. I could never carry a child, even when they were very little. I had to have ways to hoist them. So here they help each other. They are happy, it is very tender.

I visited the mid-Wales studio of poet and visual artist Nicky Arscott (born 1983). Her paintings explore the ambivalence of motherhood expertly but also with humor.

The image of a child is such a loaded thing. We have to remember that it’s not literally them, my children, it’s an image. I use my motherhood a lot in my work, it fits nicely. I think it’s added something that wasn’t there before. My kids get involved with my art – I love it.

Nicky Arscott, interviewed by the writer.

All of these artists would say that being a mother and being an artist can not only coexist but for them is a necessary and essential relationship. The actor and writer Deborah Eisenberg said:

the point of art is to disturb what is comfortable and safe, and that shouldn’t be anyone’s goal as a parent.

Deborah Eisenberg, quoted in Kim Brooks, “A Portrait of the Artist As a Young Mom“, The Cut.

But motherhood, like art, is a complicated experience. Art can sustain but can also challenge – it can be generative and destructive. Artworks that allow for complexity and ambiguity offer us a wider, richer experience. Out of motherhood, a woman can produce brave, political, and beautiful art. As poet Paul Valéry said “living her painting, painting her life.”