Troy at the British Museum: Myth and Reality 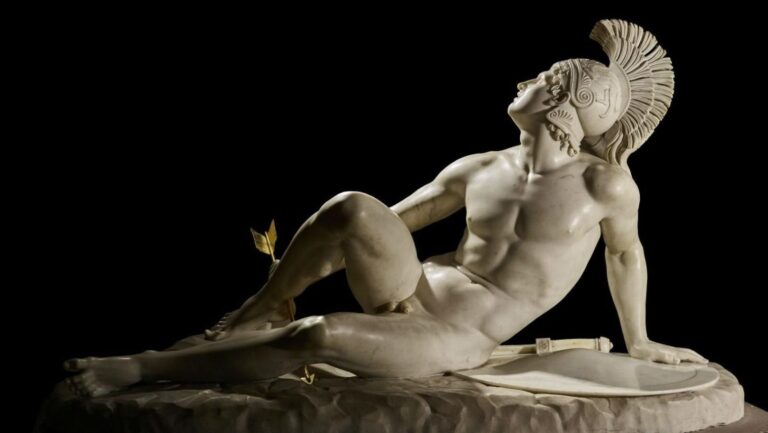 This excellently curated exhibition on Troy at the British Museum in London takes visitors on a journey spanning thousands of years. There’s plenty for history geeks who want to know more about the real Trojan War (if such a war really did take place), but for art lovers too there’s much to feast the eyes on.

Unsurprisingly for an exhibition about the ancient world, there is pottery aplenty, such as this dramatic example. It’s astonishing to look at a work that is half a century older than Christ, depicting an image which is simultaneously historical and distressingly modern in its representation of male violence against a woman. If you’re squeamish about death and fighting, this exhibition probably isn’t for you: It is, after all, about one of the most infamous wars in history, or perhaps, myth.

Ancient poet Homer deservedly plays a central role in the exhibition, since without his Iliad and Odyssey, the Trojan War might have been forgotten. Visitors even have the chance to listen to extracts from these epic poems in the original Greek, and quotations are dotted around the atmospherically-lit exhibition.

The centrepiece is this stunning statue of Achilles in his death throes, which was commissioned in the 19th century by the sixth Duke of Devonshire. It was displayed in Chatsworth House, Devonshire, England, indicating the enduring fascination the Trojan War and its protagonists held right into the modern era, even on this rainy island far from the northwest of Turkey where the real Troy was likely situated.

The works on display in the exhibition go right up to the 20th and 21st centuries, such as this intriguing painting by Romare Bearden, an African-American artist who relocated Odysseus’ travels to the Caribbean and Africa. This is just one of many examples of how this ancient story has been reimagined and reappropriated over the ages. New Zealand artist Marian Maguire provides a new interpretation in her lithograph Te Whiti and Titokowaru Discuss the Question, ‘What is Peace?’

The only problem with this otherwise flawless exhibition, which costs around £20, is its status as a ‘BP exhibition’. Unlike the Tate and the Royal Shakespeare Company, both of which recently cut their ties with the multinational oil and gas firm, the British Museum – like the National Portrait Gallery and other British institutions – continues to accept money from British Petroleum, even at a time of rising anxiety about the escalating climate crisis – a phenomenon the British Museum itself will address in an upcoming exhibition.

Whilst the exhibition ‘Troy: Myth and Reality‘ commendably critiques the futility of war, the British Museum also needs to condemn BPs exploitation of the natural world. This isn’t to say that you should avoid the exhibition, which runs until March 8th, but perhaps, if you’re concerned about the British Museum’s links to BP, you can mention this to staff when you visit.

Also on display at the British Museum until January 26th is an engrossing exhibition on how the Islamic world influenced Western art.