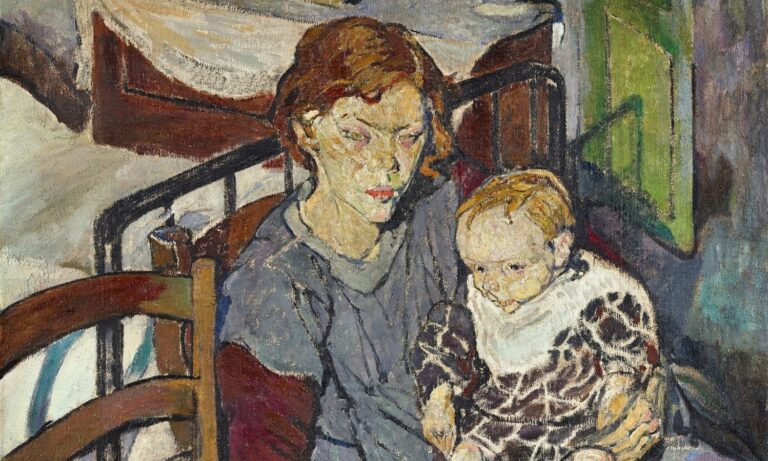 Although in her day she was most famous for portraying the members of the Parisian Boheme, Mela Muter was deeply fascinated with capturing the intimacy permeating the daily lives of mothers. In fact, motherhood became the most recurring theme in her original oeuvre which shows influences ranging from Symbolism, Post-Impressionism, and Cubism.

Behind these elegant, yet expressive paintings, hides an extremely stormy biography of a woman who, through her entire work, was inspired by a fascination with other people.

Why a “stormy” biography? Probably because Mela Muter was born a Polish Jew at the end of the 19th century. The daughter of a wealthy merchant, at the age of 23 she began studying art in a drawing school for women in Warsaw. Yet, having met her future husband Michał Mutermilch (1874–1947), a Jewish-Polish writer, critic, and socialist activist, she left for Paris with her family (by then, their only child, Andrzej, was one year old). In France, Muter returned to studying painting and she attended the Académie de la Grande Chaumiere and the Académie Colarossi, and from 1902 she exhibited at the Paris Salon.

A Painter of Parisian Elites

In Paris, she quickly became part of the bohemian and intellectual elite. In terms of painting, she is associated with the so-called Parisian school, but because of her highly individual style, inspired by Whistler, Van Gogh, Gauguin, Cézanne, Vuillard, Picasso, and Severini, it is difficult to label her with a specific trend. Most often she is associated with Post-Impressionism (check the Van Gogh-esque strong contours and hasty, multi-directional brush strokes), yet I see in her a herald of Expressionism, too (look at her signature!).

She painted charming landscapes (look more of them up, definitely worth it!) but was most famous for her moving portraits, to the extent that she was known as an “elite portraitist” since she portrayed politicians, writers, scientists, and artists, such as Auguste Rodin, Diego Rivera, Leopold Gottlieb, and Polish writers like Henryk Sienkiewicz, Władysław Reymont, and Leopold Staff. However, she also painted multiple portraits of women, children, and above all, mothers.

Complicated Love Life and a Tragedy

Her private life was no less fascinating than her artistic experiments and works. She traveled quite a lot, spending a couple of years in Spain (1911–1914), as she was fascinated by Spanish landscapes and art, visiting Switzerland, Brittany, and Southern France. In 1917, she met activist Raymond Lefebvre, who was 15 years her junior, and their love affair led to the failure of her marriage with the much older Mutermilch.

She planned marriage with her lover, but this never happened because when Lefebvre went to Soviet Russia in 1920, he died in unexplained circumstances during a White Sea cruise. His death came as a great hit to Muter who was already dealing with the illness of her son, who suffered from tuberculosis, and was mourning her mother, as well as her sister Gustawa Hirszberg (d. 1911). These tragedies combined brought about her conversion to Catholicism in 1923. After the death of Raymond, Muter began having love affairs with other men from artistic circles: with Polish poet Leopold Staff, and with poet Rainer Maria Rilke.

In 1927, she became a French citizen but sadly her financial situation deteriorated and, at the beginning of the 1930s, she started giving painting lessons to support herself. She spent World War II in the South of France, where she worked and lived in Avignon. She received a small flat from the city authorities, and she kept on teaching drawing, art history, and literature at the girls’ College St. Marie.

As is the case with any painter, with age her eyesight started to worsen and she needed a cataract operation which improved her eyes a little, so she could work till her death in 1967. Sadly, she died in poverty, completely forgotten by the elites she had once portrayed. The only friend who took care of her in the final years of her life was Bolesław Nawrocki, who also took care of the collection of her works and documents, which nowadays can be found in Toruń, Poland.

Her works are rarely presented in public (what a shame, I think they are real pearls!) and today most of them are in private collections. Mela Muter brilliantly depicted the heart-warming atmosphere that people radiated. These are her own words on portraiture:

I don’t ask myself whether a person in front of my easels is good, false, generous, intelligent. I try to dominate them and represent them just as I do in the case of a flower, tomato or tree; to feel myself into their essence; if I manage to do that, I express myself through their personality.