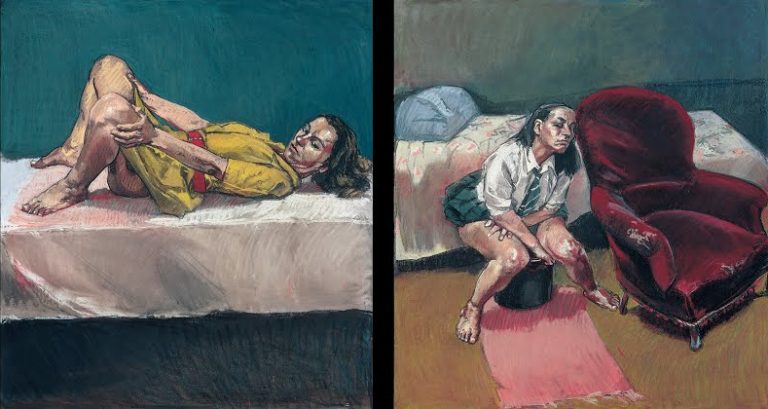 Story within a Story in Paula Rego’s World

Who Was Paula Rego?

A Dame of the British Empire since 2010 and a winner of several international prizes. She has received various honorary doctoral degrees from universities all over the world, among them the Rhode Island School of Design (USA), the University of St. Andrews (Scotland), and Oxford University (UK). Even though she was officially a British national, many defined her as a Portuguese painter because she was born in Lisbon, studied there, and for many years she criticized the dictatorship of António de Oliveira Salazar in her works.

She shared her anti-regime sentiments with her anti-fascist father – every day they used to listen together to the BBC and dream of democracy. He supported her aspirations to study art and decided to send her away to a better future in the UK, where she would complete her education. She attended the Slade School of Fine Arts in London from 1952-1956, together with David Hockney and Frank Auerbach.

It was there that she met Victor Willing, seven years her senior, a famous painter and art critic. He was married but grew increasingly interested in Rego. According to their son, Nick, when he heard the story of their first encounter as an adult, he realized it was “actually closer to rape.” Rego told him this story and many others in a personal film he made about her in 2017. He claimed that his mother opened up to him because he closely resembled his father, who was the biggest love and influence in Rego’s life.

Strong Women Who Paint Their Pain

When Victor Willing separated from his first wife in 1956, he joined Rego in Lisbon, where the couple lived and painted together in her parents’ house in Ericeira. They were married in 1959 and had three children. The 1960s were decisive years for the family, as Rego discovered Jean Dubuffet’s primitive works, which freed her own style (just look at the Salazar vomiting the Homeland). Moreover, both Rego and Willing lost their fathers in 1966. A year after, Willing was diagnosed with multiple sclerosis and Rego had to become his caretaker. All her frustrations, fears, pain, and little joys can be found in her paintings, often depicting strong women like Paula Rego herself.

The family stayed in Portugal until 1974 when the national revolution forced them to move back to London. Willing died in 1988 and the year after Rego’s career took off as she went back to painting full time. She became involved through paintings with political undertones, especially by the end of the 1990s, when Portugal held an abortion referendum. Rego produced a series of paintings touching upon women’s suffering, injustice, and fear, which she knew herself having had several abortions. She also produced prints about female genital mutilation to raise awareness about the problem and urge for action.

Paula Rego derived her inspiration from literature and film, with Disney movies being her great passion and influence on her 1996 Spellbound exhibition at the Hayward Gallery. She often brought up many fairy tales in her painting, yet all of them are somehow inverted, topsy-turvy, unsettling, and odd. Painters who inspired her are James Ensor, Francisco Goya and Edward Burra.

Strong Women Fight for Themselves

Rego often painted women and did so without beautification or gloss. She admitted to painting from a woman’s perspective because, as she says, she is a woman and she paints what she sees. Although she said that being a woman didn’t hinder her artistic development or career, she acknowledged that signing with a gallery or selling her work used to be difficult. Yet, it’s not a problem anymore as she is one of the most renowned Portuguese and British artists.