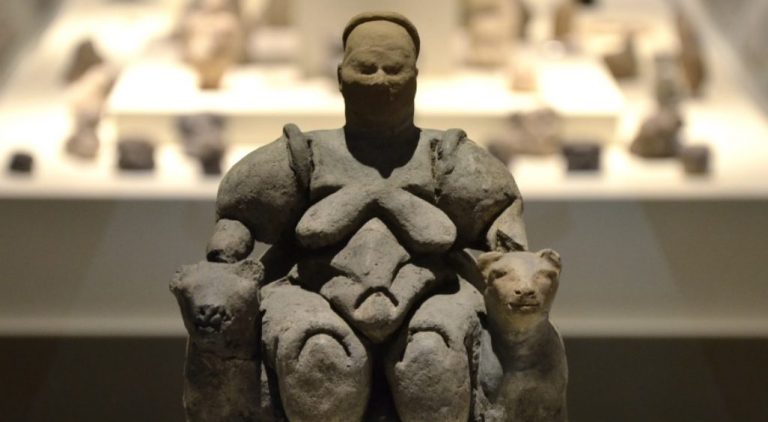 Our prehistoric ancestors moved around a lot. It was a short and brutal life back then – you needed the protection and guidance of your gods and goddesses. So, what better solution than to carry them around in your pocket? Portable gods! Let’s take a look at the handheld idols, amulets, totems, and sacred objects belonging to our distant prehistoric past.

Firstly, let me confess that I don’t know if our ancestors had pockets. These sacred items would probably be wrapped in a special pouch and carried by a senior member of their group. Oh, and the term “portable gods” is also my own invention. Archeologists call these items “mobiliary art” and no one knows exactly what they represented. But suffice it to say, they were valued, cared for, and important.

The story of art as a continuous effort does not begin in the caves of southern France or among the North American Indians. There is no direct tradition which linked these strange beginnings with our own days.

Instead he believed that “art” only began with the Egyptians and the Greeks. He acknowledged:

Under certain conditions tribal artists can produce work which is just as correct in the rendering of nature as the most skillful work by a Western master.

But his assertion is that such work is “queer and unreasonable.” Sorry Mr. Gombrich, but we have no sympathy for your overblown imperialist pomposity. Prehistoric art is vital, exciting, and most definitely a part of our artistic past. We all claim ancestry in the cradle of civilization, so this is our very own history we are examining.

Small, hand-held figures are the first known evidence of prehistoric sculpture. These figures were human, animal, or a mixture of both and carved in stone, bone, antler, or ivory. We cannot know the exact meaning, use, or history of the earliest sculptural objects, but there is evidently great effort, skill, and care involved in their production.

Why would nomadic people carry around an object that wasn’t essential? Many art historians favor the spiritual angle, but we must also consider they may have been cultural objects, personal ornaments, toys, or even teaching tools. Whatever their role, they must have been important. We don’t see a huge amount of portable art – possibly 10 000 pieces across the whole globe. But what we have found will take your breath away!

Perhaps the most well-known mobiliary art is the Venus of Willendorf, who was excavated in Austria in 1908. This Paleolithic-era figure is made of oolitic limestone and is just over 11 cm high. The stone used was not local to the area where she was found, so she was definitely transported to her final resting place.

She has no facial features, which seems deliberate- perhaps to suggest her divine status? Her hair is braided in geometric circles, or it may be a headdress. Her breasts, pubic area, and soft rounded belly are emphasized. That ripe, well-fed body does seem to promise abundance and the continuance of life. When discovered she was decorated in red ochre, commonly used to symbolize the miraculous power of menstruation and birth.

Art historians generally agree that to these early “Venus” female figures, there is probably a totemic, fertility aspect; evidenced by their huge breasts and hips. The Venus of Willendorf is one of around 100 fertility style female artifacts unearthed across the globe. Remember the goddess gifs that danced across the internet a couple of years ago? Our author, Alexandra Kiely, took a close look at those goddess creations by artist Nina Paley.

There are also some anthropomorphic and animal figures to be found, but like the goddess figures, we can’t be certain if these relate to food, lifestyle, cultural, or spiritual beliefs. Some artifacts have a non-figurative form, including abstract shapes, grids, lines, dots, curves, and zigzags. It is difficult to date hand-held artifacts as they are often found far from the site where they were made. And although a stone can be dated, the engraving upon it cannot.

The Swimming Reindeer is 13 000 years old. It shows a male and female reindeer, swimming nose to tail.

This couple has been sitting in a tight embrace for 11 000 years! You are looking at the oldest known representation of lovemaking.

One of the most famous examples of prehistoric art that came up at an art auction is this ancient piece of Mesopotamian art known as The Guennol Lioness (c. 3 000 BCE). It was sold in 2007 for $57 million! Sotheby’s auction house said “it is diminutive in size but monumental in conception”. It’s one of the oldest and rarest pieces of art in the world.

Lepenski Vir in Serbia is an example of a very early phase in the development of prehistoric culture in Europe. The excavation site is noted for its level of preservation and the exceptional quality of the artifacts found. The Lepenski settlement was permanent and planned, with organized human life. Architect Hristivoje Pavlović labeled Lepenski Vir as “the first city in Europe.”

The stylized piece above could have been made yesterday. In fact, this Venus of Monruz-Neuchatel is 10 000 years old. This Swiss Magdalenian pendant of a stylized human figure was discovered in 1990 in Neuchâtel, Switzerland. It is the oldest item of prehistoric art ever found in Switzerland and one of the oldest items of ancient jewelry. Gorgeous!

The clay figure above, the Seated Woman of Çatalhöyük is obviously a female form, seated between feline-headed arm-rests. Some have suggested that this artifact depicts a fecund and fertile Mother Goddess, in the process of giving birth while seated on her throne. Others suggest she is an aged woman of high status – an elder, respected for her experience and wisdom. Either way, it seems our ancient ancestors celebrated women both in their art and in their communities.

The settlement of Çatalhöyük thrived for more than a millennium. Full of densely packed mud brick houses covered in paintings and symbolic decorations, its population reached 8 000 inhabitants. That made it one of the biggest settlements of its era.

Let’s finish with this absolute stunner, Venus of Brassempouy (c. 25 000 BCE) carved from ivory. She was found in Brassempouy, Landes, in France. It is an example of Gravettian culture and currently held by Musée d’Archéologie Nationale, Saint-Germain-en-Laye (near Paris) in France. This is one of the earliest known representations of a human face. Imagine seeing it – or even holding it!

A quote from a very modern sculptor, Alberto Giacometti seems a rather fitting way to end:

Gropingly I seek to capture in the void the invisible white thread of the miraculous which vibrates, and from which facts and dreams escape with the murmur of a brook rolling over lively and precious pebbles.

We hope you’ve enjoyed this quick tour of our favorite mobiliary art. Did we miss something? Let us know!

It seems that forming figurative shapes out of natural materials has always been with us. As humans developed, a bigger, more sophisticated brain...