Cook Like an Artist! Kitchen Inspiration from Art History 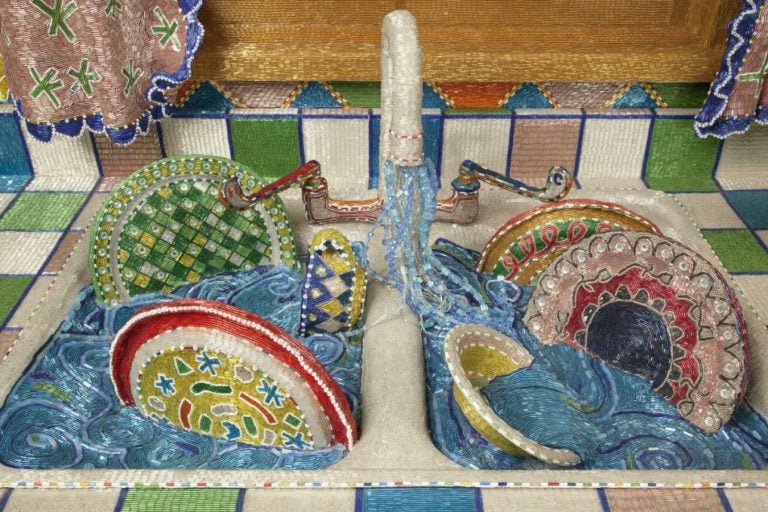 For hundreds of years, kitchens in art were the undesirable work place of unsavory maids, tucked away below the luxurious living spaces of the upper class. During the mid-16th century, Northern Renaissance artists, such as Pieter Aertsen, began to change that. Aertsen and his contemporaries brought these minor people and places to the forefront of their work. While it took a few centuries for this type of genre painting to gain traction, we owe the Dutch and Flemish a high five in helping revolutionize the image of a household kitchen. Keep reading to see how kitchens in art history have changed through the years and maybe get a bit of inspiration from art history for that kitchen remodel you’ve been dreaming of!

Pieter Aertsen, Christ in the House of Martha and Mary

This painting shows the penultimate transition from the Medieval tradition of depicting of religious subjects to ordinary, everyday subject matter. Pieter Aertsen has pushed a scene from the story of Christ visiting the home of Martha and Mary to the background. In the foreground is a much less spiritual scene. The figures occupying the Renaissance-style kitchen are unconcerned with the goings-on behind them, preferring to carry on and drink.

We see tables overflowing with food and even a beautiful vase of flowers. Traditionally, roses and lilies refer to the Virgin Mary’s virtuosity and purity. That could be an ironic inclusion as these flowers and their symbolism seem forgotten by the revelers.

In this kitchen from art history the scene attributed to Marten van Cleve, viewers see a large kitchen buzzing with meal preparations, daily chores, and perhaps some tension! One of the men in the middle leans towards his companion who holds a large knife in his outstretched arm that is perhaps not meant for the small creature dangling from his other hand. To their right, a man wraps his arm around a woman doing dishes as her chore companion gestures towards him, trying to shoo him away. Through the rounded arch near the top left corner, we see a group of people seated around a table, enjoying the fruits of the servants’ labor. More importantly, look at the size of that kitchen and its huge fireplace!

Little is known about Ferdinand van Kessel other than he was likely the great-grandson of the Flemish painter, Jan Brueghel. There is also the amusing fact that, as seen above, several of his paintings depict our evolutionary counterparts, monkeys, taking on human roles and tasks. Until the 17th century, monkeys were typically interpreted as symbols of man’s enslavement or sin.

With the growing interest in natural history during Kessel’s time, monkeys took on a new role in art: showing the foolishness of the human race. Here, van Kessel is mocking his own kind, showing us quite an absurd, yet hilarious scene as the monkeys run amok in the kitchen. We see them pouring drinks, smoking pipes, cooking, and dancing as a cat spies on the peculiar scene from the window in the top right. Why not jazz up meal times with a furry companion?

Dutch painter, Adriaan de Lelie, shows us a much more tame, quiet kitchen scene. As the title suggests, the seated woman is baking pancakes that her children eagerly await. While she cooks, a man, presumably her husband, prepares to smoke a pipe. Due to the figures’ clothing, we get a sense that this is a modestly wealthy family.

There is a framed painting on the wall but the rest of the interior is quite stark. The tiled walls illustrate a different type of construction than previously seen, reminding us of the ever-popular subway tiles used in many modern kitchens and bathrooms.

While this particular work by Vincent van Gogh received much criticism for its technical imperfections and heavy use of dark colors, it is now one of the artist’s most famous paintings. Van Gogh was much more concerned with conveying a message than achieving technical perfection with this work. His goal to portray the harsh reality of country life is evident in the figures’ bony hands and faces, showing that they have earned their sustenance from the very earth they farm.

While this kitchen from art history is quite dark in contrast to what many homeowners would prefer, there is something very quaint and comforting about the small table in this kitchen. I especially like how there is a circular energy to the conversations we see taking place. The two figures facing us are each conducting their own conversation as the man on the left and the woman on the right both have their eyes on the younger girl in the middle. Perhaps, Van Gogh is also sending us a message about the benefits of sharing a meal with family at the end of a long day.

Now, we hop across the pond from Amsterdam to take a look at a kitchen in art history from Mexico! While Eduardo Pignret was raised in France and apprenticed with Jacques-Louis David, he grew bored of painting portraits of wealthy French people. He left France and sailed to Tripoli before landing in Mexico where he spent five years painting portraits of Mexican officials.

However, his more recognizable works are those portraying the everyday life of the Mexican people, such as the painting above. Here we see quite a different, more open set up. The colors, hardware, even the women’s clothing reflect a different culture. The earthenware stove with at least three eyes is especially unique, as is the patterned tile that partially decorates the walls. The woven brick pattern on the floor as well as the warm yellow walls create quite a cozy, functional kitchen!

Taking a hop back across the pond let’s look at Ernst Ludwig Kirchner’s colorful interpretation of the small kitchen in his mountain cottage. After being declared unfit for active military service, Kirchner’s mental and physical health took a plunge, leading to his voluntary retirement in 1917. Hence the artist journeyed to Switzerland where he took refuge in a small mountain cottage.

The painting above shows us an Expressionist interpretation of the rustic kitchen space, this time featuring new technology – the pot belly stove! Certainly, this swelling, stretched vision is not what the wooden cottage really looked like. His use of color here is a bit bolder than what most people would prefer in their kitchen. There is something slightly appealing about a crazy colorful kitchen, though, right? When you peek out the door and see that majestic view, the importance of aesthetic colors seems to fade away!

When this painting appeared on the cover of the Saturday Evening Post in October of 1948, it likely struck very close to home for many Americans. As the title and imagery suggests, Norman Rockwell is showing us a disagreement, presumably between husband and wife, about who will win the next presidential election. Although her husband is leaning halfway across the table to get in her face, the wife sits tall and resolute with her arms crossed, defending her point of view. Neither their distraught son nor the dog under the chair are fond of the commotion. Naturally, the cat is unbothered and continues his nap on the back of the woman’s chair.

In this painting we also see a more modern American kitchen from art history! The window, hung with gauzy curtains, lets in natural light, illuminating the whole space. We see the high-top table, a conventional oven, a toaster, and even a rug! More importantly, this piece highlights an evolution in the kitchen’s purpose. It is no longer a dark, unsavory space where maids and cooks do the cooking and cleaning. Now, it is the heart of the home where families, pets included, gather to share meals, have discussions, do homework, listen to the radio, entertain company, and so much more. I don’t know about you, but that sounds an awful lot like my family’s kitchen!

This photograph from Andy Warhol’s film, Kitchen, shows us a New York-apartment-size kitchen. The rather Avant-garde film was actually shot in the audio guy’s Big Apple apartment, which gives us a very accurate representation of just how small these spaces can be. However, it does have a refrigerator, sink, an oven, semi-adequate shelving, a milkshake blender, and probably a telephone! There is also a fairly small table that the characters are finding creative uses for. The plot of this film is said to be quite strange but one could say it exemplifies the casual, sometimes odd events that also happen in the kitchen.

Retro style furniture is making a comeback! If you imagine this tiny space with a little color and your own personal touches, it could be a very cozy spot!

Last but not least, we take a look at Liza Lou’s installation piece titled – you guessed it- Kitchen. From 1991-1996, Lou spent countless hours hand-placing tiny glass beads in this set using tweezers. In the end, her hard work paid off tremendously. While this is definitely not everyone’s idea of a kitchen, a little color and some sparkle never hurt anybody!

She created various patterns, materials, mosaics, even flowing water and a fresh pie, to give us this very striking, homely kitchen. At the same time, the effort and thought behind her sparkling, vibrant work refers to the time-consuming, yet invaluable work women do. To this day, women are often considered the “kitchen inhabitants” and keepers of the cleanliness. However, that is changing. I happened to have picked up most of my kitchen habits from watching my dad cook and do dishes for years.

To sum it all up, kitchens in art history and kitchens themselves have undergone quite the metamorphosis over the last several hundred years. What the Dutch and Flemish started with genre painting took off, revolutionizing art beyond simply depicting kitchens and everyday life in art. While being in the kitchen does still seem like an unsavory chore for many people, it is much less so than it once was. Just like these kitchens in art, our own cooking spaces are quite often the center of our homes where we talk with friends and family, eat, drink, generally have a good time, and, occasionally, a heated debate.