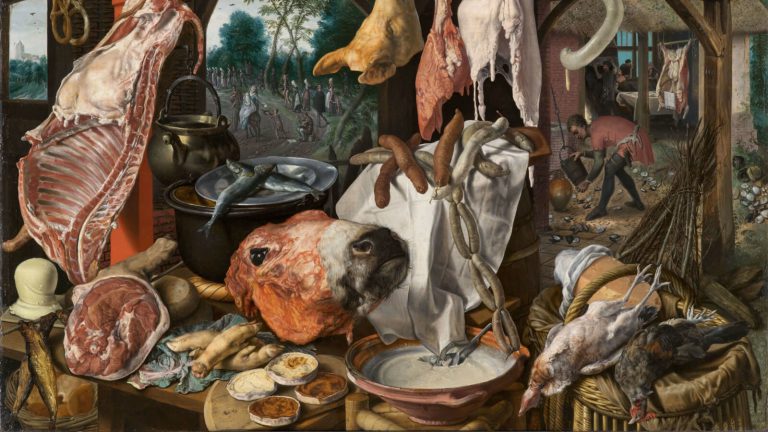 Pieter Aertsen’s Meat Stall with the Holy Family Giving Alms is an interesting painting as it provides a wonderful glimpse into the varied attitudes of 16th-century Dutch society. It combines the habits of the peasantry with the nobility, and the activities and environment of the religious with the irreligious. With its ingenious use of vignettes and symbolism, it provides a stark contrast between gluttony, lust, and sloth with religious piety. It is a great dialogue on the contrasts between sin and salvation.

The early modern Netherlands was one of the most commercially advanced and prosperous European regions during the 16th century. It had a strong economy fueled by overseas trading and domestic shipbuilding. It also had large regions controlled by the extensive Habsburg empire from 1482 to 1714. These Habsburg-dominated areas, independent of the Dutch Republic, were known first as the Habsburg Netherlands and then as the Spanish Netherlands. The Habsburg domination led to a heavily Catholic presence in the Netherlands, which was reflected in much of its art and resulted in an artistic blending of Dutch morality and Catholic piety. Pieter Aertsen’s Meat Stall with the Holy Family Giving Alms is such an example.

Pieter Aertsen lived and worked in Antwerp for three decades where he captured images familiar to his daily life. Meat Stall with the Holy Family Giving Alms at first glance appears to be simply a typical Dutch genre scene. It is oil on panel and measures 3 ft. 9 ½ in. x 5 ft. 6 ½ in. (115.6 x 168.9 cm). Within its large dimensions, it presents a bounty of life-size products arranged to dramatic effect. Dominating the scene are meat products such as a cow’s head, pig’s head, whole chickens, fresh kippers, smoked kippers, linked sausages, stuffed intestine, pig’s feet, and meat pies. In addition to this gouty display are pretzels, cheese, butter, oysters, and mussels. However, there is a deeper meaning than merely food on show. There are strong religious images and allusions within the composition.

In the background of the painting, and framed by the wooden market stall, is a small scene with figures. It almost seems included as an afterthought, small and overshadowed by the foreground meats. However, this small background scene includes the important Christian Holy Family. Joseph leads a donkey carrying both Mary and baby Jesus. Mary turns her shrouded head and with her left hand deposits some bread into the bowl of the beggar boy. The beggar boy’s father sits on his wicker basket giving thanks with outstretched, prayer-like hands. Curious onlookers walk behind but do not engage in this alms scene; their heads are turned towards the Holy Family and the beggars, but their bodies continue walking towards the left. These onlookers are walking towards a church in their Sunday best, and Pieter Aertsen is providing biting commentary on the moral bankruptcy of many churchgoers who do not practice what they preach.

Scattered throughout the foreground are more implied religious images. There are “spiritual foods” such as the crossed kippers on the pewter platter in the middle left of the composition. Fish were an early symbol of Christianity and Jesus. Think of the miracle of Jesus known as the Feeding of the 5,000 when five loaves and two fish were multiplied to feed a crowd of 5,000 people. These two kippers are in a rough crucifix-shape alluding to the Crucifixion of Jesus and his message of Resurrection. In the upper left hand corner, are two hanging pretzels and a jug of wine. Pretzels were commonly served as bread during Lent. Wine was served during the Last Supper, is served during the Eucharist, and symbolizes Christ’s blood.

The “spiritual foods” of kippers, pretzels, and wine are contrasted with the “sinful foods” of oysters and mussels. These molluscs were and still are considered aphrodisiacs. They are believed to increase sexual desire, attraction, and pleasure. The shells of eaten oysters and mussels are found discarded on the floor of the middle right side of the painting. Two women and two men are eating and carousing above the seafood shells, and these four people therefore display lust and sloth. They take pleasure in their carnal sensations and are oblivious to the spiritual sensations found in the alms scene to their left.

High above the food, religion and revelry is a scandal! Seen in the upper right hand corner is a placard sign which reads in calligraphic Dutch, “Hier achter is erve te coope terstot metter roeÿe elck sÿn gerief oft teenemale. 154” which translates to “Behind this point there is land for sale, measured either immediately by the rod according to your pleasure, or 154 rods altogether.” What does this “land for sale” sign imply? Well, before 1551 there was briefly a public scandal in Antwerp over the sale of some land. Supposedly, a sizable tract of land was sold from an Antwerp charitable institution to a land speculator. The transformation of “charity” land to “greed” land was outrageous to the Antwerp citizens! Are these charitable institutions so financially poor that they need to sell their assets? Or worse, are they simply greedy and looking to speculate with the developers? Either reason was scandalous to both Pieter Aertsen and Antwerp because it meant that good-intention institutions were either insolvent due to a lack of public support, indicating a public moral bankruptcy, or the institutions were morally bankrupt themselves and seeking to cash-in on rising land values.

Pieter Aertsen’s Meat Stall with the Holy Family Giving Alms is an interesting dialogue on the contrasts between sin and salvation. It explores visual appeal and emotional disgust. It is not simply a genre painting; it is a complex masterpiece of tacky and tasteful attitudes.