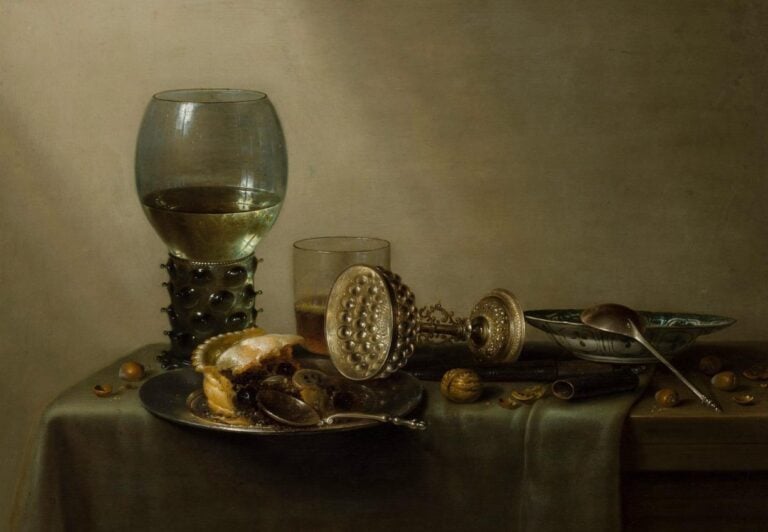 You may think that all those marvelous Dutch still lifes from the 16th and 17th centuries were just some random sets of fruits, vegetables, and skulls. But guess what, they all had their hidden meaning! The still life painting allowed artists to send extra messages through these symbols and had been used for many years.

Most of those allegories represented the brevity of life, decay, and finally death. Ready to get to know what all this stuff means?

An apple has many meanings. It can signify love, knowledge, wisdom, joy, and death. In religious works it usually means temptation and original sin. The apple is also associated with a woman’s anatomy, breasts in particular, and then the core of the halved apple representing her sexuality.

Artichokes, asparagus and strawberries were, for their part, symbolic of the fruits of Paradise or Heaven.

Birds, or a pair of birds, represent the resurrection of the soul after death. Also, colorful parrots functioned as an exotic decoration in the composition and informed the viewer of the vast colonial domains that the Dutch Republic owned.

Books are easy: they meant learning or transmitting knowledge. But also, as you can see on this painting, they could document existing written works and indicate additional clues.

A candle also has lots of meanings. It can indicate the passing of time or faith in God (when it’s burning). When extinguished, it means death, the loss of virginity, or the corruption of matter. It can symbolize light in darkness for a lonely individual, or the light of Christ, purification or cleansing.

A cat usually meant illicit love. In medieval times the cat represented lust and prostitution, but in later paintings it was included as a provider of peaceful and enjoyable company. For centuries cats have been considered mysterious, beautiful, and exotic. On the painting above this cat is depicted as it tries to hunt down this dead cockerel. Cute, isn’t it?

Flowers have been main subjects of many Dutch and Flemish still lifes. Different flowers hold different meanings. They can symbolize innocence, the four seasons, or religious symbols. The rose, for instance, stands for love, the lily for purity, and the sunflower for devotion.

Lemons were very expensive back then. Therefore, it was a very popular item to depict, especially peeled. Lemons are sour and bitter, so they symbolizes the deceptive allure or attraction of earthly beauty.

Shells, in a religious work, represent pilgrimages or saints (they are a symbol of St. James, the patron of pilgrims).  The clam symbolizes the Virgin Mary.

That’s it for now! We hope that after reading this article you will be able to read some hidden messages in Dutch still lifes that were left by their painters…

Nicole works as the Assistant Editor in the DailyArt Magazine and has MA degree in art history. She is passionate about 17th century Dutch art and colonial history. Her life-goal is to work with art and experience its beauty on a daily basis.