Time For… The Intervention of the Sabine Women 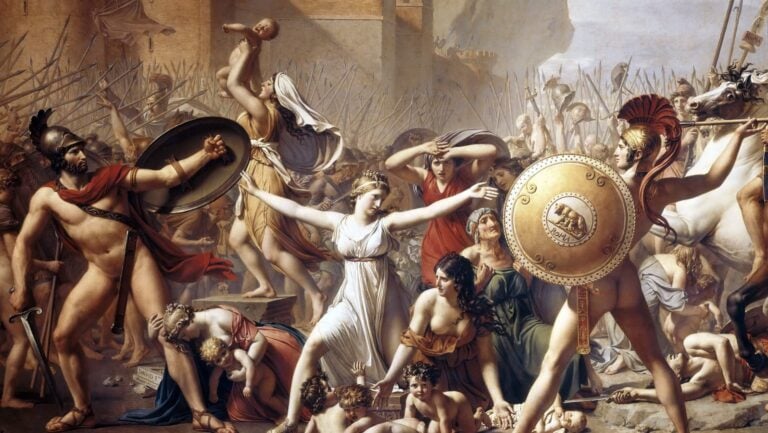 The Intervention of the Sabine Women is one of this painting that is widely known, considered to be a “classic” but rarely someone knows what is it about. Well, we can’t blame ourselves. How can we know what a legendary episode following the abduction of the Sabine women by the founding generation of Rome meant to the Revolutionary France?

David began planning the work while he was imprisoned in the Luxembourg Palace in 1795. France was at war with other European nations after a period of civil conflict culminating in the Reign of Terror and the Thermidorian Reaction, during which David had been imprisoned as a supporter of Robespierre. Well, you know the saying that the Revolution devours its children.

Work on the painting commenced in 1796, after his estranged wife visited him in jail. He conceived the idea of telling the story, to honour his wife, with the theme being love prevailing over conflict. The painting was also seen as a plea for the people to reunite after the bloodshed of the revolution. Its realization took him nearly four years.

The painting depicts Romulus’s wife Hersilia – the daughter of Titus Tatius, leader of the Sabines – rushing between her husband and her father and placing her babies between them. A vigorous Romulus prepares to strike a half-retreating Tatius with his spear, but hesitates.

The rocky outcrop in the background is the Tarpeian Rock, a reference to civil conflict, since the Roman punishment for treason was to be thrown from the rock. According to legend, when Tatius attacked Rome, he almost succeeded in capturing the city because of the treason of the Vestal Virgin Tarpeia, daughter of Spurius Tarpeius, governor of the citadel on the Capitoline Hill. She opened the city gates for the Sabines in return for ‘what they bore on their arms.’ She believed that she would receive their golden bracelets. Instead, the Sabines crushed her to death with their shields, and she was thrown from the rock which since bore her name.

The image of family conflict in the Sabines was a metaphor of the revolutionary process which had now culminated in peace and reconciliation. The painting was a tribute to Madame David and a recognition of the power of women as peacemakers.

The funny thing is that David divorced her wife during the Revolution, as she was a royalist, and he supported Robespierre. Maybe in prison, he realized how wrong he was. Anyways, afterward, David aligned himself with yet another political regime upon his release: that of Napoleon, The First Consul of France. At this time he developed his Empire style, notable for its use of warm Venetian colors. After Napoleon’s fall from Imperial power and the Bourbon revival, David exiled himself to Brussels, then in the United Kingdom of the Netherlands, where he remained until his death.