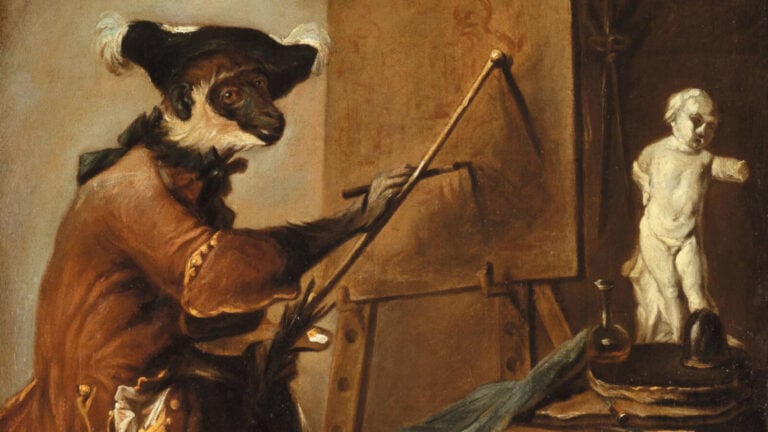 It’s tacky! It’s funny! It’s weird! Yes, Jean-Baptiste Chardin’s The Monkey Painter is definitely not what you would consider in good taste. It definitely has the appeal you would find in a funny greeting card, or maybe in a recent meme. However, despite its questionable appeal, The Monkey Painter actually has strong historical significance that continues on the ideas of fast fashion, academic criticism, and social commentary. This is a monkey painter. This is a monkey business.

At first glance Jean-Baptiste Chardin’s The Monkey Painter, you may initially ask, “What am I looking at?” or, “Why is this in the Louvre?” or even possibly say, “This is not art.” It’s definitely not what you would expect to grace the walls of the world’s largest museum and one of the world’s most prestigious collections. The Musée du Louvre owns over 460,000 objects but can only display 35,000 pieces. So when the Musée du Louvre can only display less than 8% of its collection, why would Chardin’s The Monkey Painter make the cut? The reasons are numerous, but the three most important are its placement in the fashion of singerie, criticism of the French Royal Academy of Painting and Sculpture, and the questioning of art and artists’ social validity. This monkey is more than just looking cute!

Okay, so what is singerie? Singerie is a French term describing visual arts depicting monkeys engaging in human activities. It was at the height of its popularity in France during the early to mid 18th century, and it was exported as a cultural commodity to all of the leading nations of Western Europe. Practically every fashionable person during the Rococo era wanted his or her own monkey paintings, figurines, etc. Not even the famous Madame de Pompadour could escape the clutches of the singerie madness! Monkeys were the in-thing despite how ridiculous and ludicrous it appears to us now. How else can you explain the current madness for owls and llamas of 2019? The same social mentality of fashion has not changed in over 270 years. Someone fashionable decided something was cool, and everyone aspiring to be fashionable followed. Jean-Baptiste Chardin’s The Monkey Painter is an artifact of the singerie craze, and it’s a funny one too.

Jean-Baptiste Chardin’s The Monkey Painter represents academic criticism at its most ridiculous. When Chardin painted The Monkey Painter, he was a member of the French Royal Academy of Painting and Sculpture. This prestigious government-funded institution was where aspiring artists gained official recognition as professional artists by the king and French society. Once an artist was accepted as a member of the Academy, he or she had the social acknowledgement of being an artist of talent and merit. Not every artist that applied was accepted, and this exclusivity is what kept artists banging at the doors for acceptance. To be an academic member was to be better than the rest.

Jean-Baptiste Chardin painted The Monkey Painter as a criticism of the very institution he was accepted as a member. Chardin could see the beginnings of fossilization within the Academy that would only get worse as the century moved forward. The Academy was slowly limiting what they considered as acceptable subjects for paintings and sculptures. They slowly placed restrictions on pieces’ sizes versus subject matters, and then they placed caps on how many members it would accept. Many archaic and irrelevant ideas kept infiltrating the Academy to where the artistic community began to ask, “Is the Academy creating good artists or simply good students?” The argument was that a person can be a great student of art, but not a great artist. Chardin proposes this question through his The Monkey Painter. Any monkey can be taught to paint, but can you teach the monkey to think critically about its subject and how it is depicted? It is a great debate of teaching technical skills versus promoting critical thinking. This monkey is more serious than what you think!

Jean-Baptiste Chardin’s The Monkey Painter finally asks us “what is art?” and “what is the role of the artist in society?” Should artists merely portray the great historical and religious scenes of the past? To inspire us? To make us think? Or can artists merely make us laugh, to uplift our mood with silliness and cheerfulness? We understand why The Monkey Painter was created. It was a fashionable critique. However, even today, it proposes us to wonder what is the very meaning of art. Where does it belong in our lives? Is it purely decorative to fill walls? Or does it need to evoke some emotional response? Why is some art considered high, and some art is considered low? We don’t have the answers to all of these questions, and that is why Jean-Baptiste Chardin’s The Monkey Painter is such a brilliant painting because it provokes this type of discussion without necessarily providing answers. For every visitor that enters Room 920 of the Musée du Louvre, and sees this painting, there can be no doubt some sort of reaction is provoked. Perhaps laughter is heard? Perhaps pointing is seen? Perhaps a shake of the head and a blatant stare is felt? Whatever happens, the painting is engaging the audience, and that is one of the few definitive characteristics of art. Art engages the audience. The Monkey Painter definitely engages its audience, whether it is positive or negative.

Jean-Baptiste Chardin’s The Monkey Painter at first looks like a joke. It’s tacky! It’s funny! It’s weird! Whatever adjective you may use, it is definitely not boring. It gets an initial reaction, but afterwards can provoke some serious discussions on the curiosity of fashion, the role of institutionalized art, and the value of art’s role in society. Chardin’s The Monkey Painter will never rival in popularity the more famous pieces in the Louvre. The Mona Lisa, the Venus de Milo, and Liberty Leading the People will always attract more visitors and more attention. Chardin’s The Monkey Painter will always lose the popularity contest against them. However, it wins in so many ways, especially when questioning good taste and the meaning of art. This is a monkey painter. This is a monkey business.