Liza Lou Beading the World…One Tiny Bead at a Time 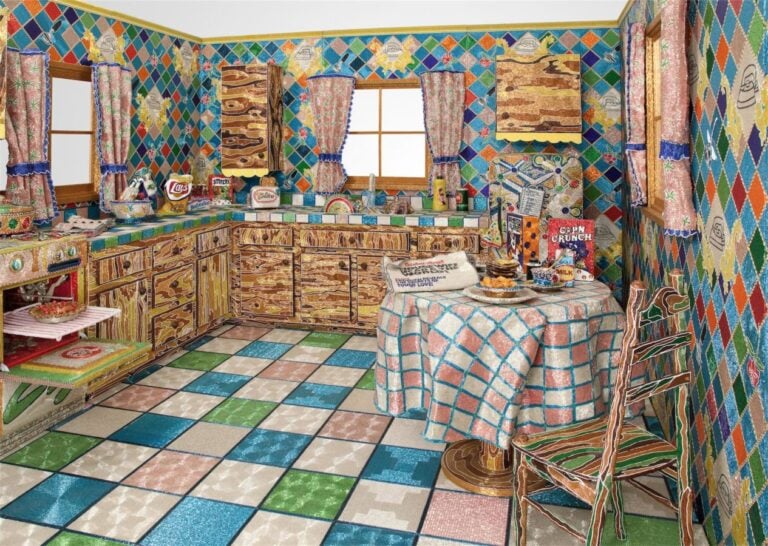 When I was in high school, my art teacher told the class to visit Liza Lou's art exhibit. I agreed and seriously it was one of the top five impressive works of art I have seen. It featured the Kitchen, Backyard, and portraits of the U.S. Presidents made entirely out of beads. When I say beads, I am talking tiny seed beads! It was mind-blowing and left a lasting impression. [caption id="attachment_6821" align="aligncenter" width="620"] 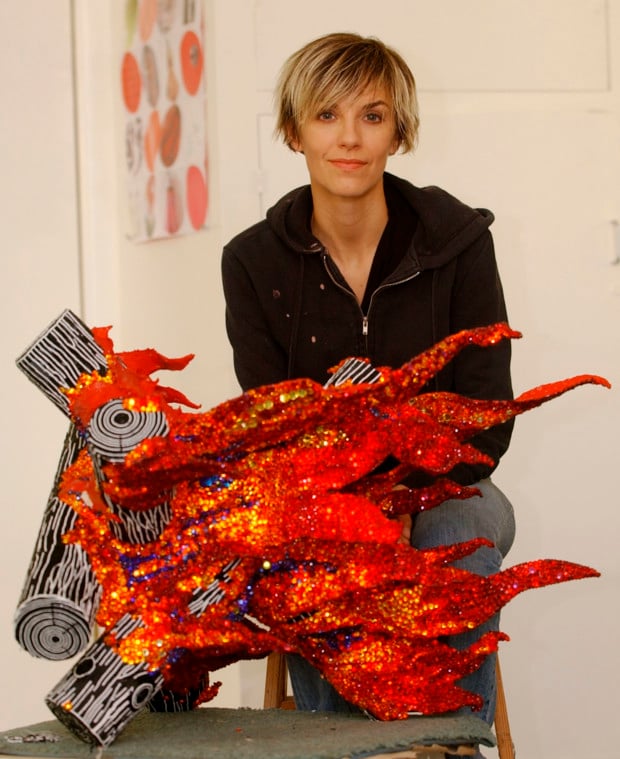 John Hayes, Liza Lou sits in her Fillmore, Calif. studio with "flames," 2002[/caption] Let's start with the Kitchen. Lou spent five years from 1991-1996 covering a life-size kitchen with millions of tiny glass beads. She had to use tweezers to put each tiny bead in its proper spot. She created mosaics on every surface of this kitchen which featured a sink with dishes and running water, a pie baking in an oven, to breakfast laid out on the table. It is glittery, 3-D, and packed with details. I was impressed it only took her 5 years! She wanted to create something sparkling and beautiful while showing how time-consuming women's work can be, but also valuable and vital. [caption id="attachment_6825" align="aligncenter" width="620"] 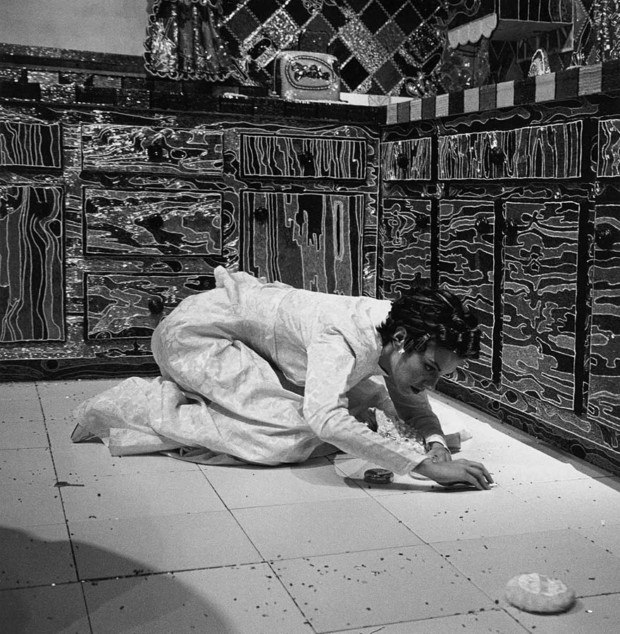 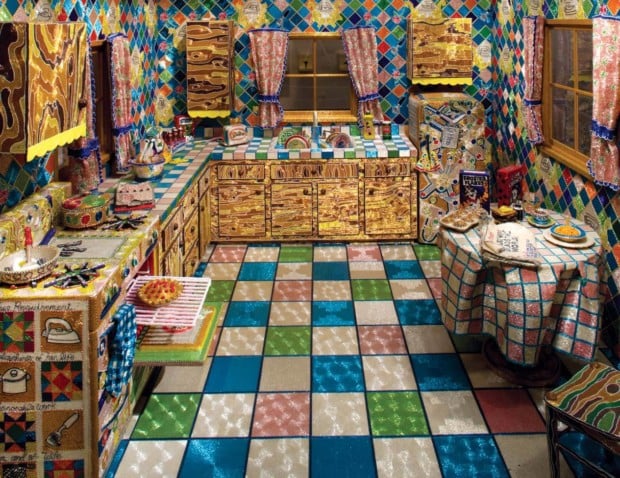 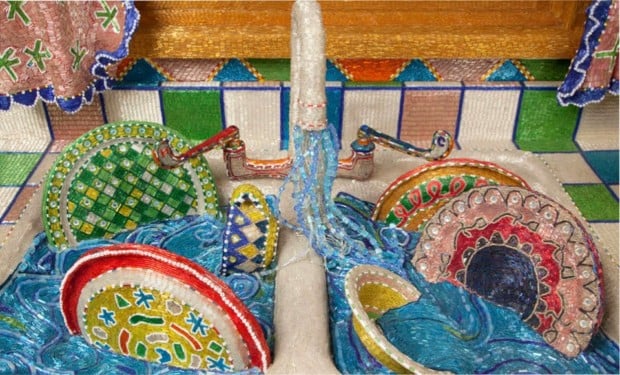 Liza Lou, Kitchen, 1999[/caption] Backyard in 1999 was even larger and was an extremely detailed scene of a backyard picnic. She used over 30 million beads. Besides a picnic table, there is a lawn mower, a hose with rushing water, and flowers with bugs on their leaves. Each blade of grass, 250,000 of them,  was ornately created out of beads. Her friend calculated that it would take her 4 years just to make the grass so she held weekly Saturday workshops for a year and invited the local community to make the blades of grass with her. She was impressed by how the people who helped her would create slight variations and differences in the something simple as stringing 9-11 beads on a wire to make a blade of grass. This theme of how the human hand can cause variances in mundane tasks is something that she develops later in her career as an artist. [caption id="attachment_6811" align="aligncenter" width="620"] 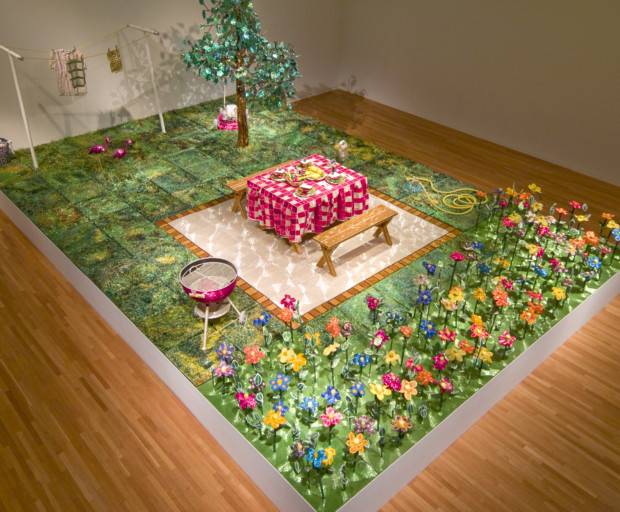 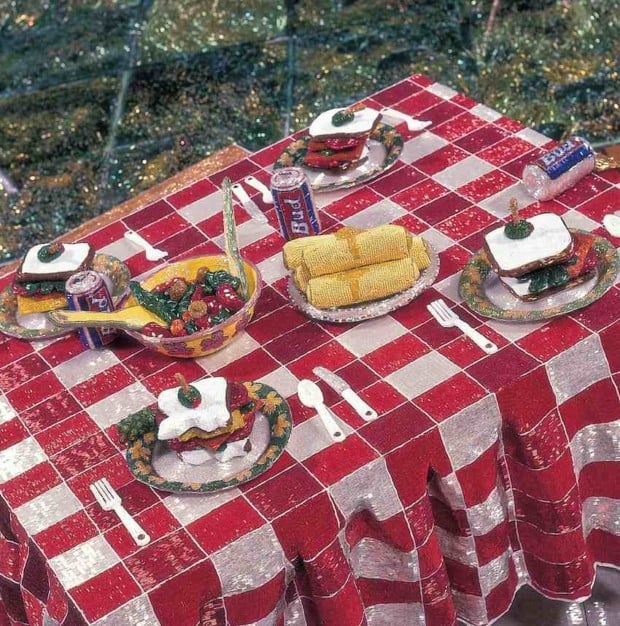 Liza Lou, Backyard, 1999[/caption] Lou lives and works in South Africa where she employs traditional Zulu bead workers to help her create her time-intensive art. She wanted to make a difference, but also learn from others. She values the process of making art and the labor involved especially when surrounded by community. She also highlights the subtle differences in work that each woman she employs makes with identical materials. She will have women string together beads into strips and then she sews them together. Although the strips use the same identical beads and string, the variations and intricacies each woman makes create an impressive "painting." While beads are an unusual medium to use, Liza Lou's art is impressive and impactful. [caption id="attachment_6827" align="aligncenter" width="620"] 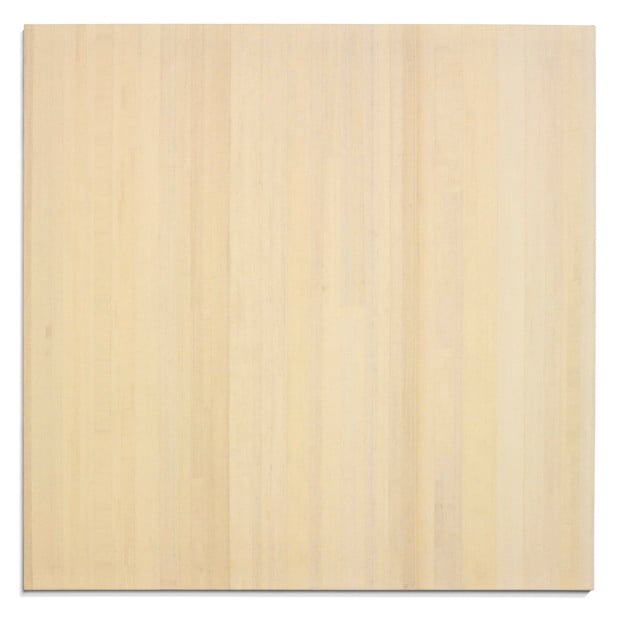