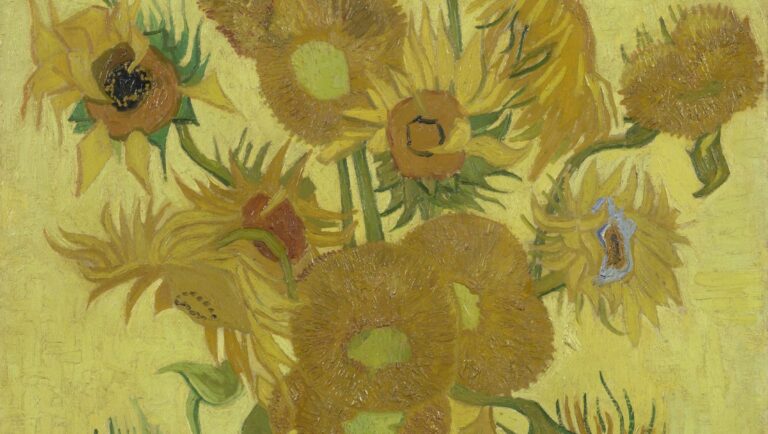 In January 2019, the Van Gogh Museum in Amsterdam announced that the painting Sunflowers will not be leaving Amsterdam anymore due to its fragile condition. This conclusion followed the extensive research conducted since 2016, concluding in the exhibition Van Gogh and the Sunflowers which opens today.

Between 11 January and 22 February 2019, the painting underwent minor conservation treatment. The research deemed that the painting’s condition is stable, but it is extremely sensitive to vibrations and changes in humidity and temperature.

To officially complete and present the research on the painting the museum will hold an exhibition: Van Gogh and the Sunflowers. It will be open daily from 21 June till 1 September 2019 and the opening will be accompanied by a symposium in which the research team will present their findings. The results of the research will be published in detail in a scientific publication. Furthermore, an exhibition catalogue will be published in which the technical findings and the art historical context of the painting are explained for the larger public.

DailyArtMagazine managed to ask the research team a few questions in advance of the Van Gogh and the Sunflowers exhibition, to shed more lights on the findings.

Sunflowers will not leave Van Gogh museum due to its fragile condition; did you have to make similar decisions regarding any other paintings in your collection? If yes, which ones and what was the reason for the decision?

Quite a number of paintings in the collection do not travel due to their fragile condition. Some paintings are only lent on very exceptional occasions because they are so important in the museum’s presentation. Sunflowers was one of them, and now it cannot be lent anymore at all.

The press release mentions the use of the MOLAB platform, which allowed conducting comprehensive research without moving the painting. What tests did MOLAB make possible and what did you find out from these?

With the portable equipment of MOLAB (Mobile Laboratory), it was possible to use a number of non-invasive techniques on Van Gogh’s Sunflowers, such as Raman spectroscopy, visible hyperspectral imaging, optical coherent tomography (OCT) and reflection FTIR spectroscopy, to obtain information about the paint layers and the varnish.

You mention that it was possible to track the exact roll of linen from which the canvas originates. Could you describe how it was done and what other paintings share canvas from the same roll?

Advanced computer techniques have been developed to assist the process of comparing the weave patterns of canvases revealed in X-radiographs of paintings. Local variations that result from the weaving process are registered along the horizontal and vertical thread directions for an entire canvas. Visualized in the form of a color-coded weave map, this provides a unique ‘fingerprint’ (resembling a striped barcode) for each painting.  In retrospect, we can use automated weave maps to establish a match between picture supports that were cut from the same roll of canvas in their aligned positions. In other words, we can reconstruct the roll layout. So far, nine other paintings cut from the same roll as the Amsterdam Sunflowers have been identified, dating from the period late December 1888 to April 1889.

Taking into account other Van Gogh paintings that have undergone comprehensive research before (eg. The Bedroom), what surprises did you come across whilst researching Sunflowers? What was the most exciting part of the work?

One of the most exciting aspects was unravelling the restoration history of Sunflowers.  We knew that the painting had been restored in 1927 and again in 1961 by the Dutch restorer Jan Cornelis Traas. However, since these former treatments are barely documented, it was only through physical and chemical investigations of the painting that we could painstakingly reconstruct what the interventions entailed. This helped to understand the current condition of Sunflowers and was crucial to deciding the best way of caring for the painting in the future.

Many paintings have a lot of layers of later-added varnish, which darkens with age and often dulls the colours; in the case of Sunflowers you decided not to remove these as they are bound with the paint. With modern equipment, are you able to assess to what degree the varnish changes the colours? Do you plan to ‘re-create an original’ version like it was done with The Bedroom in the Unravel Van Gogh app?

We will not make a digital reconstruction of Van Gogh’s Sunflowers, as we did with The Bedroom, but in the exhibition we will show painted reconstructions of details of Sunflowers, of what the original colors of the painting (without the varnish) looked like. These reconstructions were painted by a conservator on the basis of the results from the research into Sunflowers.

The layer of wax added in the 1990s has been removed, is this a restoration technique still in use or, as technology progressed, was it replaced with a new method?

The wax was not present all over the painting but had been locally applied to consolidate small areas of fragile paint. Only the excess wax present on the paint surface was removed to improve the appearance of the painting. No further measures were needed.

The exhibition will include twenty-three works, virtually all from the Van Gogh Museum’s own collection: in addition to Van Gogh’s Sunflowers, there are masterpieces like The Yellow House (1888) and Paul Gauguin’s Vincent van Gogh Painting Sunflowers (1888), as well as a number of drawings by Van Gogh that are rarely shown because of their fragility and sensitivity to light. Besides, there is a loan by Isaac Israëls on view, Woman in Profile before Van Gogh’s ‘Sunflowers’ (1916-1920) from Museum de Fundatie, Zwolle.

Sometimes it is challenging to present the results of such comprehensive scientific research in a way that is engaging to a layperson. How do you plan to tackle this challenge in the exhibition?

We will use a variety of means for explaining the research in the exhibition, from texts to videos and apps with which the visitors can discover the effects of color and composition, for example, and painted reconstructions of details of Sunflowers. With the exhibition, a catalogue will be published in which the technical findings and the art historical context of Sunflowers are explained for the larger public.

If you feel like more Van Gogh check these out: