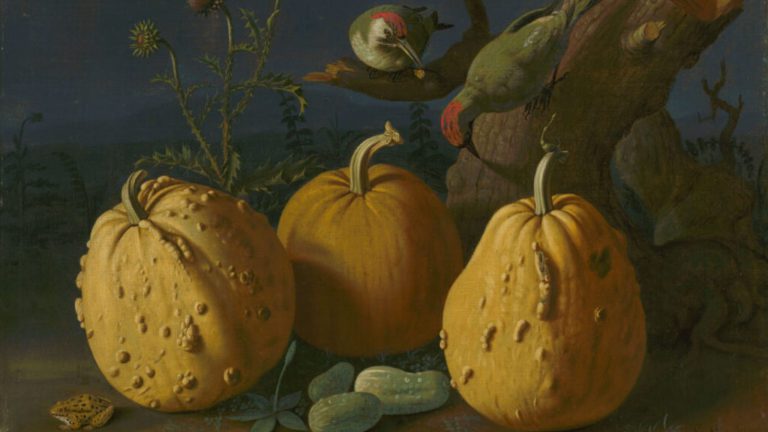 King Drinks: Jacob Jordaens and the Feast of the Bean King

I love everything about autumn – the cool, crisp air, the warm sweaters, the sense that the holiday season will soon arrive. But most of all, I love autumn food! In my humble opinion, no time of the year provides better cuisine than in the autumn. For artists, autumnal foods have also provided great inspiration, because many of the season’s most characteristic and delicious products also happen to be very visually attractive. Here are all the greatest autumn foods portrayed in still life paintings.

Chestnuts are an underrated, but tasty autumn treat. Although there are many ways to prepare them – in a chestnut stuffing, for example – my family likes to do it without much fuss. Simply rinse the chestnuts, cut a cross on the top of each, put them in a small pan, and bake them in the oven. Give them a moment to cool after you take them out, then crack them with your fingers. Extracting the now-soft chestnut flesh takes work, to be honest, but it’s definitely worth it.

In this painting by French still life master Jean-Baptiste Chardin, three chestnuts sit in the left corner of the table, alongside grapes, pears, and a teapot. Incidentally, grapes and pears are two more delicious foods harvested in the fall, and who doesn’t want a nice cup of hot tea on a crisp autumn morning?

Even though many of us start to enjoy fresh corn in the later part of the summer, there’s no question that corn is an icon of the fall. There are so many great ways to eat corn, but cornbread and corn on the cob are two favorites. Corn is especially beloved in the New World, where it’s native. In America, midwest-born painter Alfred Montgomery (1857-1922) made his career out of painting corn and other farm produce. He was a Kansas artist and grade-school art teacher who painted in a strongly realist style. It’s difficult to imagine a painting that says autumn better than this one.

No food is more quintessentially autumnal than the apple. In fact, apple picking is a beloved autumn activity for families with children, couples on dates, nature lovers, and more in certain parts of the world. Participants visit commercial orchards to enjoy the crisp fall air while picking ripe apples off the trees. Afterwards, there are so many delicious ways to eat the basketful you’ve picked. You can bake them into pies, press them into a sauce, candy them with a caramel coating, or just enjoy them raw.

Apples have traditionally been popular subjects for still-life paintings, and Paul Cezanne was perhaps the most prolific of all apple painters.

Squashes are great subjects for still life paintings, because they come in such a variety of fun colors and shapes. (They’re also great in a soup or salad!) This still life depicts several different types of squash, including some eye-catching, oblong bottle gourds, alongside other fruits and vegetables. It looks like somebody just brought the harvest in! Painted sometime in the first decade of the 17th century, this is a very early Italian still life. It was once attributed to Caravaggio, but most people now consider it to more probably be by an unidentified follower of his style.

Pumpkins aren’t simply autumn produce; they’ve become symbols of autumn itself. They decorate homes at least as often as plates between September and November. In recent times, food and beverage makers have added pumpkin spice to everything from lattes to cream cheese. However, pumpkins themselves can be wonderful to eat, carve, or decorate with.

Pumpkins in still life paintings aren’t usually the perfect, round, orange vegetables we’re most familiar with today. Many are green, bulbous, un-glamorous varieties. However, this still life by Štefan Michal-Vörös Izbighy pairs three recognizable orange pumpkins with a trio of cucumbers and a duo of colorful birds.

I know that this one isn’t a still life, but I simply had to include it. The Cranberry Harvest, Island of Nantucket depicts an important communal activity in 19th-century Nantucket – harvesting cranberries. An island off of Cape Cod, Massachusetts, Nantucket is a hotbed of cranberry cultivation. In fact, Nantucket once boasted the world’s largest cranberry bog (a watery field where cranberries grow). The bog is still active but nowadays counts as multiple, smaller bogs. I enjoy making my own cranberry sauce every Thanksgiving, but cranberries also taste great in a variety of beverages and baked goods. American painter Eastman Johnson beautifully captured both the cranberry and corn harvests in a series of paintings celebrating traditional life in rural Nantucket.

Long before Julia Child published Mastering the Art of French Cooking, artists had already made the connection between food and art. But how to...