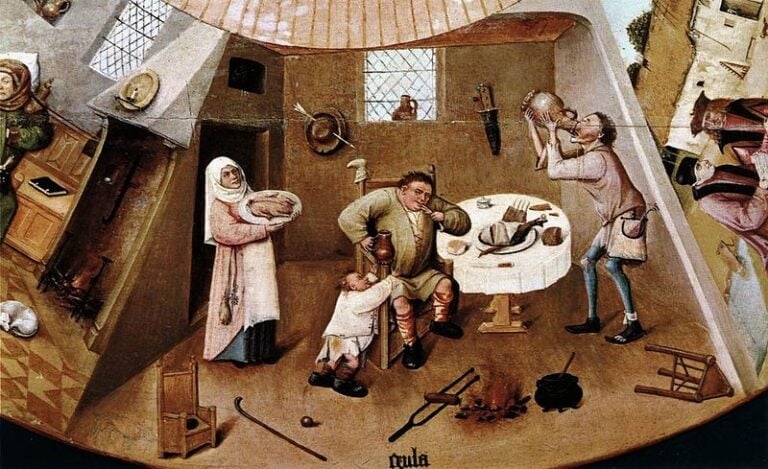 Chocolate in Painting for a Cozy Evening

Doughnuts, doughnuts… who wouldn’t be tempted by one freshly out of the bakery, covered in a sweet coating and with a warm, creamy filling… Aaaaah… It is Fat Thursday!
People dieting – no talk of calories or fats, you’re better not to enter to the Fat Thursday post because it is all about excess and gluttony.

I would even eat a spoon if only I could

Gluttony, i.e. excessive indulgence in food and drink, is one of the seven deadly sins that good, observant Christians should avoid committing. It’s a recurring subject in art history and worth looking at, especially since it’s pretty clear that humanity hasn’t changed at all and still enjoys overeating, not only on Fat Thursday.

It’s rather rare to personify Gluttony as a woman. Usually, as you will see in this collection, it was men who were responsible for overdrinking and overeating (probably because poor women were too tired to eat after hours of cooking). Yet Gustav Klimt had to maintain integrity regarding his stylistic choice of painting women as personifications of various vices and virtues in his Beethoven frieze, hence he painted this middle-aged woman with a swollen belly and big breasts looking at the young ones as if they were something to eat.

Gluttony and lust were the two sins that Hieronymus Bosch regarded as the most disgusting. This is how he combined them here in one panel, a perfect image for Fat Thursday. In the top left, we can see a pretty fat man riding a barrel in some kind of pond and playing the trumpet. To me, he seems pretty drunk, just check out his red cheeks. People around the barrel seem to be trying to squeeze the magic drink out of it. Below, another drunk man has decided to have a swim while balancing a plate of meat on his head (don’t try it, what a waste of food, better to eat it). While these were the scenes condemning gluttony, in a hut we see the allegory of Lust: there is a couple about to devote to lascivious acts…

This Gluttony is one of seven parts of The Seven Deadly Sins, identified by an inscription, which together forms the innermost circle of Bosch’s religious panel which was created to convey moral teaching through depicting people from different social classes in everyday situations. The scenes undoubtedly show Bosch as a pioneer in genre painting, which was soon to become important.

When your mouth becomes a vacuum cleaner

Well, this print was attributed to Albrecht Dürer but I highly doubt the attribution. Unless he did it when he was in the same condition as the protagonists: in a pretty cheerful mood. It looks like a carnival party (I love their hats). The guy on the left intrigues me the most: is he devouring an entire goose? And why does the mouth of a guy holding the ewer looks like a vacuum cleaner pipe?

In the Middle Ages, Cockaigne was a mythical land of happiness and plenty, where restrictions of society didn’t oblige anyone, sexual liberty was open and for everyone, and there was enough food at hand (apparently the skies rained cheeses… I wouldn’t mind, I love cheese.) But Brueghel depicted it scornfully, using the well-known allegory he laughed at and criticized sloth and gluttony. We see a soldier, a peasant, and a clerk, each of them with their attributes, lying exhausted after a feast in the open air. An unfinished egg runs between them, and so does the pig. In the upper right corner, we see a man with a spoon trying to climb to reach Cockaigne, while the soldier on the left awaits his share of food with an open mouth. If you look closely you’ll see that the fence in the center of the painting is made of cheese! What a life!

Drinking with the devil

The moral message of the image (which most probably is l’Ange’s self-portrait) is clear: check out the figure holding the lighted torch and enjoying the view of the young (and quite handsome, ahem) man indulging in drink – it is nobody else but the horned devil! Keep away boy or it will end badly! The flickering flame makes the atmosphere strictly Caravaggesque: the play of light and shadow emphasizes the drama of the situation.

To finish off Fat Thursday with style, I’m showing you this aristocratic scene. I just love how the pet dog of the fat man defends his bones and meat. This is called dedication.